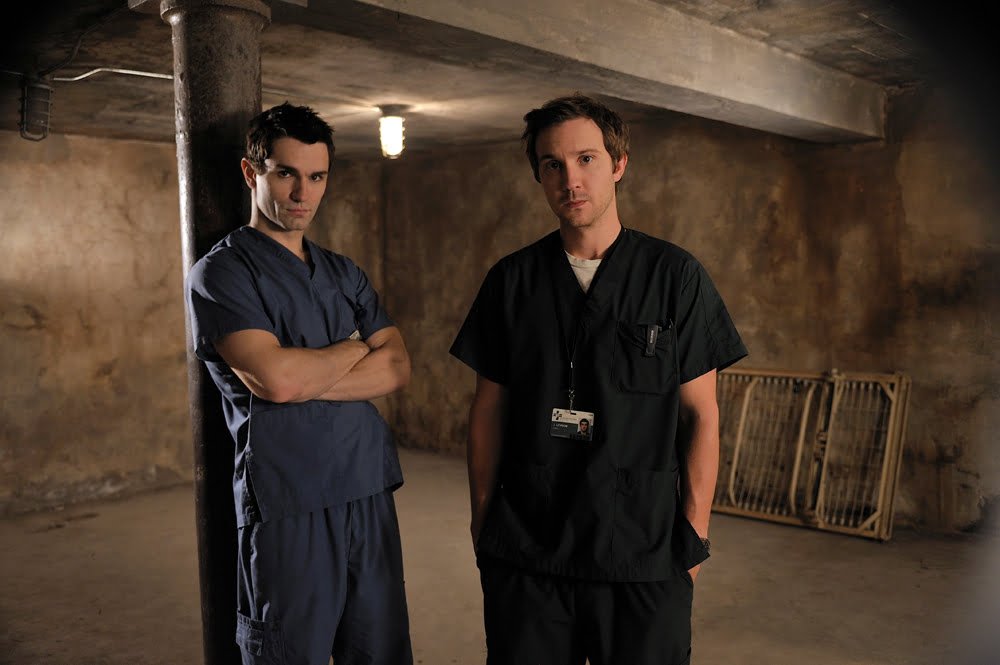 The folks at Space have been very, very good to me. They send me screeners for a lot of shows I might never get a chance to watch otherwise, and they’ve let me interview stars from a bunch of their shows, including Stargate Universe and Todd and the Book of Pure Evil, not to mention the opportunity to chat with Ryan Robbins and Robin Dunne from Sanctuary. But, cheesy as it is, the best thing about Space to me is the fact that they pick up a lot of very, very cool shows, and they love promoting them to the fans.

Take, for example, one of my new favorite shows: the North American version of Being Human, starring Sam Witwer, Sam Huntington, and Meaghan Rath. The trio of actors play Aidan, Josh, and Sally: a vampire, werewolf, and a ghost all living in one little house as they try to work out their issues.

Aidan is a former bad-boy vampire who had a falling out with his creator, Bishop (played by the amazing Mark Pellegrino), and now is trying to live his life without killing helpless humans for blood and sport. Josh has been hiding out from society it seems, trying to cover up his monstrous side after he left his family behind two years ago. And Sally starts out the series stuck in their apartment, unsure how she even died, and trying to figure out if she can leave the house without vanishing into thin air. At the same time, she’s trying to imagine what might have happened to the love of her life.

Adapted from the hit British dramedy of the same name, the series was filmed in Montreal, and so far looks like a hot ticket for both Space in Canada, and SyFy in the United States.

For me, the timing of Being Human is great because I haven’t had a lot of shows I really cared about, or wanted to watch, so it’s a breath of fresh air to see a show with some blood and guts that takes the story a notch more seriously than all of the teen dramas, but doesn’t feel so otherworldly as that other vampire show, True Blood.

I still need to see more of the series before I’m willing to call the show a favorite, but based solely on the first episode, and the slick cliff-hanger ending of said episode, I’m pretty close to just turning over Monday nights for some serious Being Human appreciation.

Meaghan Rath as Sally in Being Human

Do yourself a favour and watch the original series, this cheap knock-off doesn’t even compare.