The other reason I love Warner Bros. 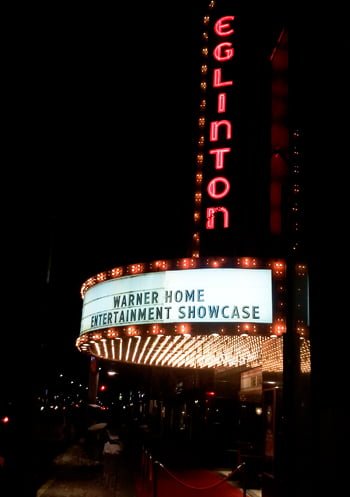 Call me a media sucker, but I love a good event, and frankly, not many people throw an event as well as the folks at Warner Bros. Home Entertainment here in Canada. Last Thursday they threw an awards-themed celebration to promote their latest lineup of DVD and Blu-ray releases, and I can happily say I was pleasantly wined and dined by the end of the night.

Held at the historic Eglinton Grand, they had a “TV personality” welcoming people to the red carpet, swanky drinks and hors d’oeuvres before the show, a nice dinner, and then a fancy presentation on stage with people in costume, a band, and yes, lots of information about upcoming releases. (Plus, no Warner event would be complete until Chris Lewchuk steps out in costume…)

As events went, it was pretty flash, but I have to admit this is all just a nice touch for me. The thing is, when it all boils down to it, Warner Bros. is a class act. They throw parties that are honestly a very nice touch, or at least I think so as a journalist, but the thing that endears me to the company is not the glam or even the gift bags. What I love about Warner is that they know how to bundle up their films onto home video.

Take a look at classics like the recent re-releases of One Flew Over the Cuckoos Nest, or 2009’s deluxe packaging for Gone With The Wind on Blu-ray; or newer films like Inception, and the Watchmen Director’s Cut with Maximum Movie Mode; these are pristine examples of how to make great movie packages for fans who want more than just the movie.

Better yet though, as a fan of both of these franchises, check out The Ultimate Matrix Collection that came out a few years ago, or one of my new favorites, the Harry Potter Ultimate Edition for Year One through Four of the films (which includes up to Harry Potter and the Goblet of Fire). For the Harry Potter releases, the packages come with extended cuts of the movies, more documentaries than you can shake a wand at and goodies like collectible cards.

While great special editions are about more than just the goodies, what I love is that Warner knows how to offer a complete package with their releases. They cover the angles from the art and the packaging, down to how they box it all up.

To be fair, I love a lot of other studio releases. I can think of loads of examples from the last year, but maybe none more astounding than Walt Disney’s Lost: The Complete Collection on Blu-ray (with the special box that included hidden compartments), which was one of the best uses of packaging I had seen in a long time, and the special features were clearly made for Lost fanatics like me. I also loved Columbia Pictures’ 30th Anniversary of Close Encounters of the Third Kind, Paramount’s stunning The Godfather: The Coppola Restoration, and of course, Fox’s Alien Quadrilogy boxed set, and I haven’t even talked about television sets like Shout Factory’s Freaks and Geeks: Yearbook.

Looking at my shelves of cherished releases though, my eye is continually drawn to Warner’s impressive lineup. Other studios put out nice packages for their films, but if you ask me, none do it as consistently as Warner Bros. I hate to gush and play favorites here, but as a film fanatic it makes me very happy to see movies treated this well.

And honestly, throwing a party like an awards event just adds a little icing to my little, personal love-in. (My only shallow request? If you’re throwing an awards event and there’s a gift bag… maybe put some movies in it?)