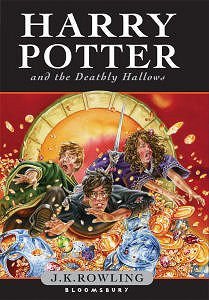 Harry Potter and the Deathly Hallows

Maybe more to the point, fans can finally have the question answered – will Harry Potter live or die at the end of the series? I could tell you of course, but I think it’s better if you find out for yourself. Let’s just say that the epic battle is joined and death is not far behind.

To get to this point however we’ve had a long journey. At the end of Harry Potter and the Half-Blood Prince, Harry had been given a quest to find a number of artifacts that needed to be destroyed before anyone would ever be able to kill off Lord Voldemort. But what was most notable about the end of Half-Blood Prince was the clear message that Harry was done with his schooling at Hogwarts. Half-Blood Prince also ended with the darkest moment in Harry’s life up to that point, and it paved the way for a very dark journey.

Which is exactly what we get in Deathly Hallows – darkness, and a long trip for Harry to reach a logical conclusion. Along that route we see numerous deaths (off the top of my head I counted at least eight good guys who die before the end), including two within the first couple of chapters, and the tone of all the action is as intense as anything we’ve seen in the series. Harry is put upon from all sides, and as we get deeper into the story more and more things seem to go wrong.

From the steps of his Aunt and Uncle’s home to going into hiding from Voldemort and his army of Death Eaters, Harry is practically alone and disillusioned with the world. Even with Ron and Hermione by his side there’s no escaping the dread of the fight to come, and the fact that the trio is lost without a guide to lead them.

There’s a number of times where they seem to stumble, barely elude capture by Voldemort and his forces, and even have to work to escape from tight spots, but there’s also a true sense of purpose and evolution at play.

In true Rowling style Deathly Hallows also isn’t hundreds of pages of sadness or lonely situations. At nearly every turn in the book we get funny asides, some clever dialogue, and quite a few honest moments where it feels like Harry is real flesh and blood – sitting beside us, almost within reach. There are life lessons here, love, and even remorse from some characters who we may have even thought of as beyond such feelings.

The deaths continue though throughout the entire story and even before the gigantic battle at the end of the book you can expect a number of Harry’s friends, relatives, and enemies to meet their end. The last few chapters also lead to more deaths, not to mention losing the two major characters that Rowling has been talking about since the book’s title was revealed.

I won’t give much else away, but as Harry, Ron and Hermione search for the artifacts that could end Voldemort’s evil, Harry finally discovers the truth about himself, Dumbledore, and his family that he feels he’s been denied for so long. At points he becomes disillusioned with Dumbledore and the fact that he really barely ever knew the man, had to steel himself against the fear of dying, and at many points has to fight to keep his friends together.

It’s as much a story about Harry growing up to be the man he’s meant to be as it is a story of good versus evil and Harry ends up being that archetypal good guy who’s afraid he’s slipped into the grey that dwells between those absolutes.

Rowling’s style has certainly evolved since the days of Philosopher’s Stone, and her writing is tighter, more interesting, and even more intense, but I’ll admit to finding a few chapters of Deathly Hallows fairly dull. She also has a way of slowing the story down when she feels that things need to be explained, rather than finding a way of eloquently revealing the truth.

Thankfully, Deathly Hallows isn’t a let down in the least, and the only complaint I have is that so many characters have to die or that they seem to meet their ends so effortlessly and without reason. On the bright side we get to see a few familiar faces, including a few who have passed on in other books, and the epilogue is sappy, but nicely conclusive in every way.