Win passes to ‘Pirates of the Caribbean: On Stranger Tides’ 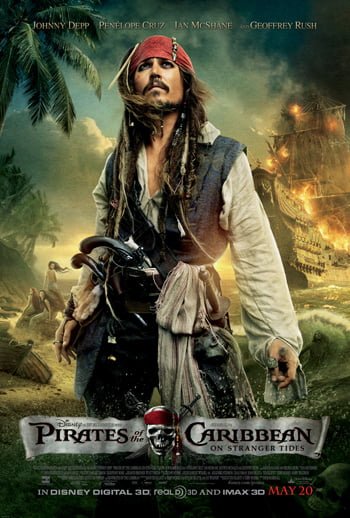 Pirates opens in theatres in 3D on May 20, but you can enter for a chance to walk the plank first with screenings in Toronto, Calgary, Vancouver, Edmonton, Ottawa and Winnipeg on Wednesday, May 18.

Plus, one lucky winner will receive a prize pack worth $150 and featuring the Lego Pirates video game for Xbox 360, available May 10 on all video game consoles, the book The Art of Pirates of the Caribbean: On Stranger Tides, plus a poster and other Pirates swag.

Synopsis: Johnny Depp returns to his iconic role of Captain Jack Sparrow in an action-packed adventure. Crossing paths with the enigmatic Angelica (Penélope Cruz), he’s not sure if it’s love–or if she’s a ruthless con artist who’s using him to find the fabled Fountain of Youth. When she forces him aboard the “Queen Anne’s Revenge,” the ship of the legendary pirate Blackbeard (Ian McShane), Jack finds himself on an unexpected adventure in which he doesn’t know whom to fear more: Blackbeard or Angelica, with whom he shares a mysterious past.

The Giveaway: Ten double passes will be awarded for screenings in Toronto, Calgary, Vancouver, Edmonton, Ottawa and Winnipeg on Wednesday, May 18th at 7:00 PM. A grand prize will also be awarded including the Lego Pirates video game for Xbox 360, the book The Art of Pirates of the Caribbean: On Stranger Tides, plus a poster.

The giveaway closes on Friday, May 13, 2011 at 12:00 PM (ET) and winners will be selected from a random draw. Chances of winning depends on total number of entries. Entrants must be over the age of 18 to be eligible. Winners are responsible for transportation to and from advanced screenings. No purchase is necessary to participate.

Please note that Pirates of the Caribbean: On Stranger Tides opens in theatres on Friday, May 20 and is subject to classification.