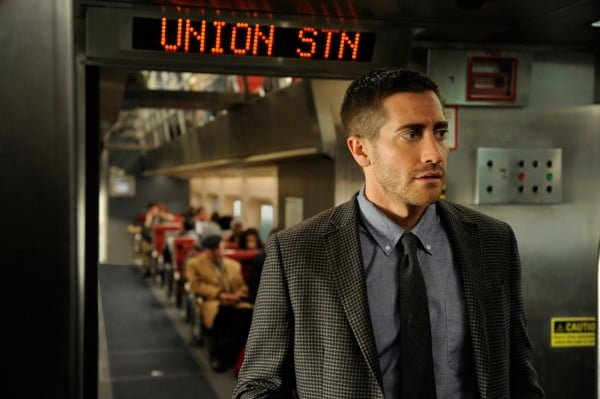 Directed by Duncan Jones, who previously worked his magic in the film Moon, Source Code is a dramatic thriller that stars Jake Gyllenhaal as Captain Colter Stevens, a decorated soldier who is assigned to work on a top-level government experiment. What bothers Colter is that he doesn’t remember how he got into the experiment in the first place, which he has been told started over two months ago. As he works through the problems, he continually finds himself in a strange capsule that seems to be falling apart around him.

Colter’s latest mission has him working in the Source Code program which allows him to relive the last eight minutes of another person’s life. Originally a helicopter pilot, Colter is now trying to help the military solve the question of who set off an explosive on a commuter train just a short time ago. If Colter can solve that question, there is hope the answer could avert an even larger catastrophe as someone threatens the city of Chicago with a radioactive dirty bomb that they’re threatening to detonate in the heart of the busy metropolis.

Reliving the last eight minutes of one man’s life over and over again, Colter hunts for answers about the bomber and his own part in the entire project, but at the same time he discovers a woman named Christina, played by Michelle Monaghan, who the soldier finds himself fixating on, despite his mission.

Co-starring Vera Farmiga and Jeffrey Wright, Source Code is a solid sci-fi adventure that is wrapped up like a mainstream thriller. As directed by Jones, who has a natural talent with far out concepts, the film rests perfectly on the shoulders of Gyllenhaal, who carries the story and the premise with ease. Likewise, Monaghan and Farmiga are great co-stars, playing the roles of Colter’s guardians inside and outside of the Source Code without really falling into the stereotypical traps one might expect in these roles.

Written by Ben Ripley, who is a bit of a novice in terms of feature films, the script could have been a notch more ingenious, since it is frequently very obvious, but the writer has created an intense, fast-paced, and intriguing story that Jones was able to fully realize thanks to his terrific filmmaking team which also includes editing by the great Paul Hirsch, and cinematography by the incredible Don Burgess.

Like Moon, Jones surprises at many turns, but he also has a knack for telling stories in a way that feels classic and unforced. Source Code has its flaws, including an underlying “scientific” concept that feels hard to believe, but it’s a rich story that will draw you in, either for the romantic story, Colter’s self-discovery, or the overall tale of a hero who has to save the day.

Features on the DVD include Cast and Crew Insights, a series of interview segments that look at the making of the film; quick Focal Points, which quickly look at some of the more scientific concepts of the film; pop-up trivia; and an audio commentary by Jones, Gyllenhaal and Ripley. Although the trivia is kind of a throw-away feature, the other features are all very entertaining, especially some of the cast interviews and most of all, the commentary which reveals a lot about how the film concept came together, and how the three of them brought it to life on screen.

Also debuting this week is the tough drama by actor-turned-director David Schwimmer, who helms this story about a family dealing with the aftermath of a sexual assault against their 14-year-old daughter, played by Liana Liberato.

Clive Owen stars as Will, Annie’s father, who becomes obsessed with tracking down the man who lured his daughter to meet with him under the pretense that he was actually a young boy.

Trust has a range of reviews from critics, who both applaud Liberato’s performance, while complaining that the film has an “after-school special” quality about it. That said, generally the reviews have been quite positive.

Roger Ebert of the Chicago Sun-Times wrote, “It’s easy to imagine how this story could have been exploited and dumbed down. It works instead with intelligence and sympathy.” While Mary F. Pols wrote for Time Magazine, “There is no denying that Schwimmer knows something about getting a performance out of an actor. Liberato, who is 15 now, is flat-out terrific.”