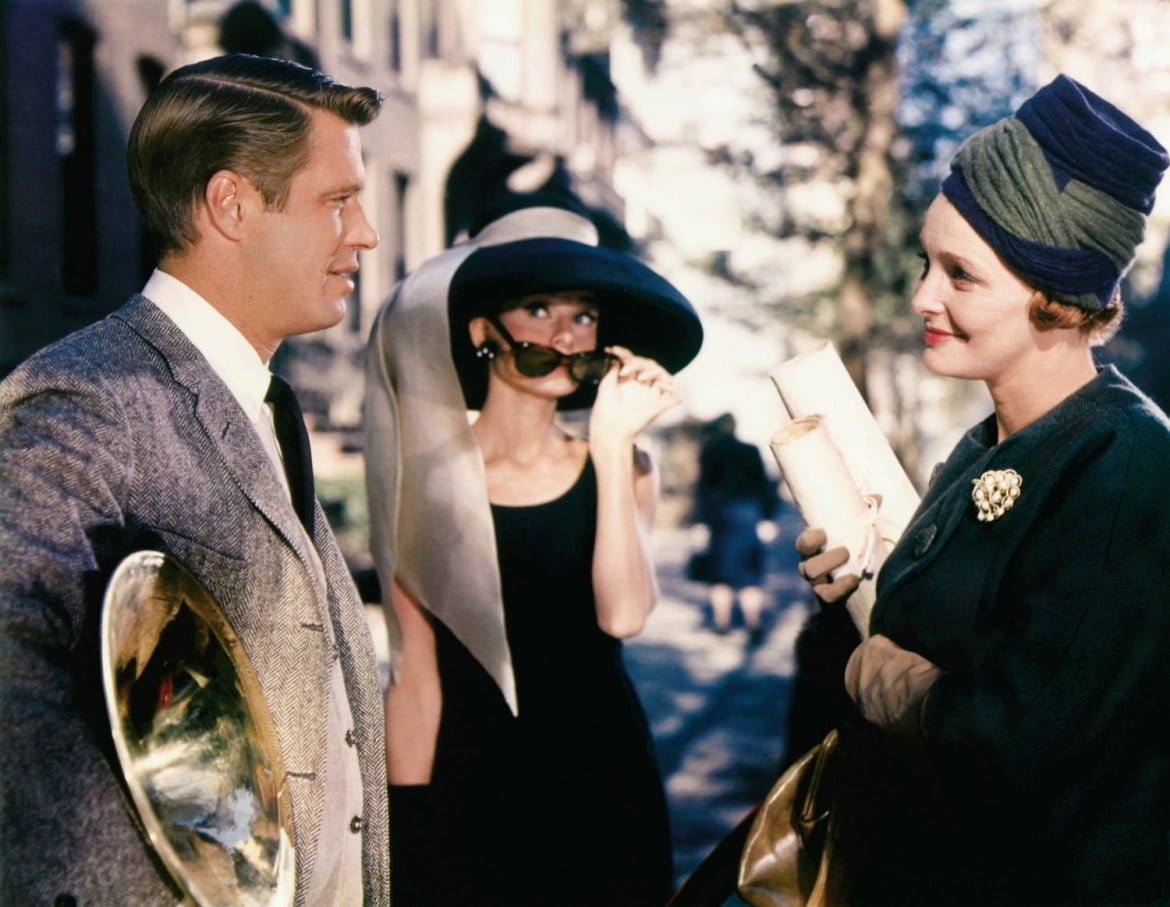 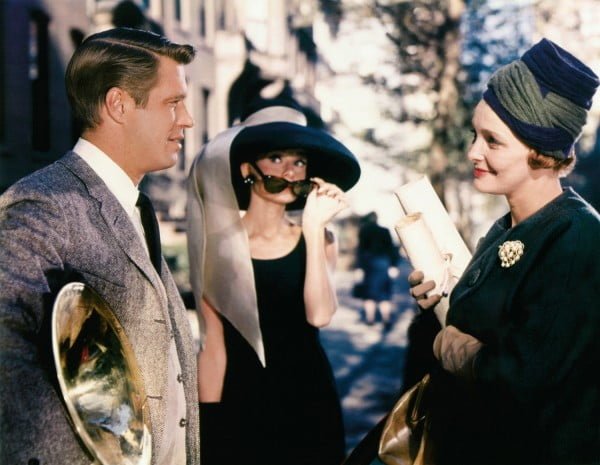 Breakfast at Tiffany’s is a quintessential example of the American film classic that somehow managed to meld the story of a quirky young woman’s life in the great New York City with a funny and heartfelt romantic drama.

Written by the great Truman Capote, with superstar Audrey Hepburn as the glimmering Holly Golightly, Breakfast at Tiffany’s gives us a glimpse into the airy life of a young fashion-hungry woman in New York City during the 1960s.

Invited to all of the best parties, with everything bought and paid for by her man du jour, Holly is living a carefree existence with her nameless cat until she meets and starts falling for the handsome new neighbour, Paul, played by George Peppard.

Paul is a writer hoping to make a career for himself, but at the same time he’s a kept man taken care of by a wealthy woman, played by Patricia Neal. As Paul and Holly become closer, they start to fall for one another, but Holly’s acquaintance, Doc, played by Buddy Ebsen, reveals some facts about her that make things just a bit more difficult.

Featuring Oscar-winning music by the great Henry Mancini, and Johnny Mercer’s song “Moon River,” Breakfast at Tiffany’s is dazzling on Blu-ray, and it is a wonderfully written comedic drama. In particular though, Holly Golightly is one of cinema’s greatest characters, and Hepburn is simply delightful in this role, including the innocence she displays, and the subdued guile with which she manages each man in every scene.

Beyond the film, the Blu-ray package is fantastic, featuring a collection of must-watch extras for any new or long-time fans. Standing out from those extras is the 20-minute look at Mancini’s music, the making-of featurette, and the commentary track with producer Richard Shepherd, who examines every moment of the film in detail.

The only notable problem with Breakfast at Tiffany’s is of course the much-discussed “Asian” character, Mr. Yunioshi–Holly’s landlord–who is played by Mickey Rooney. Included on the Blu-ray is a 17-minute-long feature that interviews people about the character and impact, but aside from that it’s hard to do anything more than shake your head each time the character appears on screen.

Bridesmaids may be one of the year’s best reviewed comedies, but I still can’t help but wonder why.

Co-starring Maya Rudolph as Annie’s best friend Lillian, plus Rose Byrne, Melissa McCarthy, Wendi McLendon-Covey and Ellie Kemper, Bridesmaids is a pretty rare comedy because it actually gave a few comedic women the chance to behave a little badly on screen for a change. Next to all the films about men going out and ruining their bachelor parties, Bridesmaids is somewhat refreshing for being just generally different.

The bright side of Bridesmaids is that their story feels fresh, and you can’t help but root for Annie as the lonely underdog. Wiig is funny and charming, while also acting completely awkward, and that definitely drew me in to her story.

My problem with Bridesmaids is that it’s simply not a very funny film. There are massive setups for big laughs, but few of them play out all that well, and the gross outs are simply gross, not exactly all that funny.

The film may be refreshing as a female-led comedy, but it lacks the laughs needed to make it work.

Animated movies have come a long way in 70 years, but after all that time Dumbo is still one of Disney’s most innocent, heart-rendingly wonderful films, and I’m happy to say that it looks beautiful on Blu-ray.

Featuring that famous baby elephant with the gigantic ears, the film is powered by a stunning score and music by Oscar-winners Frank Churchill and Oliver Wallace, and tells Dumbo’s story as he adjusts to life under the big top.

Mocked and ridiculed by everyone around him, and taken from his mother who was locked away for trying to protect him, we see Dumbo grow to prove that it’s okay to be different, and that even the smallest friend can be the greatest gift in the world.

Disney has packed the Blu-ray with lots of extras, including 10-minutes of deleted scenes, a picture-in-picture experience with Pixar and Disney experts who look at the history of the film, a featurette on the making of the film, and a number of other bonus items.

Dumbo’s 70th Anniversary Edition release is a tremendous package, and it’s wonderful to see such a revered old classic come to life in high definition.

Let me get this out of the way right now: I am a huge, huge fan of Terry Pratchett. I’ve read all but a couple of his dozens of Discworld books, and there are frankly very few writers I admire as much.

And how can you not admire the man? Pratchett has sold tens of millions of books, his books have been translated into numerous languages, and on top of that he was recognized for his contributions to literature and knighted by the Queen of England.

Most of all though, he is just a brilliant, funny, and masterful writer who can turn even the uncanniest themes into thrilling, amusing yarns.

In Going Postal, based on one of Pratchett’s more recent books, we return to the mythical city of Ankh Morpork where a con artist, Moist von Lipwig, played by Richard Coyle, is given a choice: accept death or take on the job of Postmaster of the city’s failed Post Office.

Trying to restore the glory of the post office, which is at odds with another business in town that transmits message through relay towers, Moist has to defend himself against someone that wants him dead while he also battles with his own conscience over his questionable past.

With performances that fit the book’s characters perfectly, especially Coyle and Claire Foy, and Charles Dance as Lord Havelock Vetinari, the film does a great job of bringing Pratchett’s story to life with all the trappings of the otherworldly Discworld intact, including the golems, wizards, and other amusingly odd characters. My only complaint might be the fact that Death was cut from the story, who happens to be one of the main characters to appear in every single Discworld book Pratchett has written.

Although the movie will certainly hit big with Pratchett fans, I would highly recommend the film to genre fans. The Blu-ray also has some fun features, like an introduction by Pratchett, deleted scenes, bloopers, interviews, and a commentary with the director.

Marvel deserves some credit. For the past decade, with a little help from various studios and directors, the comic book company has been turning their top heroes into big screen superheroes, and while they’ve failed to come up with a film you could compare to The Dark Knight, their superhero films have still been a lot of fun.

Maybe fun movies don’t earn a lot of Oscars, but they do earn cash, not to mention a lot more potential for spin-offs, the only trick is having a hero worth transforming for the big screen, and while Thor may not be your usual grade-A character, he’s long overdue for a movie treatment.

Chris Hemsworth stars as our hero, Thor, the arrogant warrior who is kicked out of Asgard, the home of the gods, after he disobeys his father Odin, played by Anthony Hopkins, and renews a fight with their age old enemy, the Frost Giants. Leaping into action to fight the Frost Giants, Thor and his companions are almost defeated, but they’re saved at the last minute when Odin comes to the rescue, effectively breaking the truce that existed between them.

For his rash behavior, Odin tosses Thor down to Earth and bars him from using his precious hammer, Mjolnir, which gives Thor all his power. Meanwhile, Loki, played by Tom Hiddleston, discovers that he’s actually the son of the leader of the Frost Giants and seizes the throne of Asgard. Back on Earth, where Thor starts falling for a scientist, played by Natalie Portman, a group of his allies journey to meet him to bring their hero back as Loki sends the ultimate destroyer after them.

Featuring an amusing cast, with a scene-chewing Anthony Hopkins, and Hemsworth as the ideal Thor, Marvel’s latest adaptation is fun, exciting, and filled with eye-candy. It is also a clear and interesting setup for more Thor films, not to mention the upcoming Avengers movie.