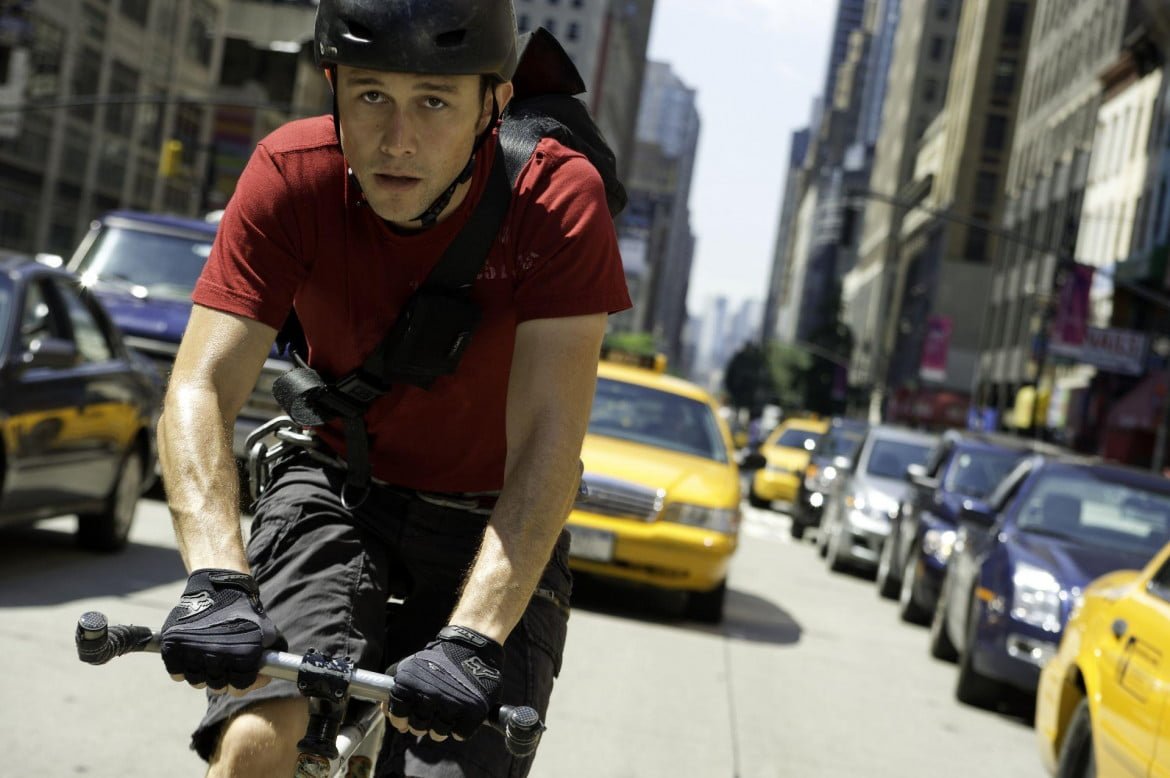 This week’s latest Blu-ray reviews, a look at new releases from December 31, including: Looper and Premium Rush. Plus, reviews for titles available on January 8: Dredd, Frankenweenie, and Smash: Season One.

Looper debuted at the Toronto International Film Festival earlier this year, and it was instantly one of my favorite films of the year. At the same time, it made director Rian Johnson one of my favourite filmmakers, thanks to his clever story, and his unique vision for the film.

Joseph Gordon-Levitt stars as the young Joe, a “Looper” who takes out targets sent to him from the future. Every day he goes to the same spot, and at the same time each day a crime organization from the future sends him a bound target that he has to kill, and then he has to dispose of the body.

Young Joe’s present day, which in 2047, is a dark time when society has come undone, and the gang that controls the Loopers also controls the police. As Joe puts it early on, time travel hasn’t been invented yet, but it has in his future, and that’s what makes his job possible.

Things change very quickly for our Young Joe though when his contract is closed on him when his older self, played by Bruce Willis, is sent back to be killed–thus “closing his loop”. From there, the two Joes fight it out to decide how the future will ultimately unfold.

The story of Looper though is about people, and relationships. Old Joe has relationships that Young Joe just can’t understand, and likewise Young Joe slowly grows up throughout the film, and builds a new relationship with Sara, played by Emily Blunt, and her son Cid, played by Pierce Gagnon. The relationship between Sara and Cid is also a brilliant focus for the film, and offers a unique dark side that becomes a center-point for the story.

Some elements of the story are a little predictable, but the film does leave you guessing, and it’s one of the most original science fiction films I’ve seen in ages.

On Blu-ray, the film looks exceptional, but the extras will leave you wanting a lot more. Included features offer a look at the Science of Time Travel, deleted scenes and commentary, plus scoring, an animated trailer, and The Future from the Beginning, which looks at how the film came together.

Premium Rush was definitely a surprise. You can often judge a film by its trailer, and sadly, Premium Rush had a terrible, derivative-looking trailer that did not do director David Koepp’s film justice.

Joseph Gordon-Levitt also stars in this film, but in Premium Rush he’s a Manhattan bike courier named Wilee, who inadvertently gets dragged into a cat and mouse game involving a crooked cop and an envelope that’s worth a lot of money to someone.

Wilee doesn’t realize though how badly the cop, played by Michael Shannon, wants the package he’s delivering, and with his own pay on the line, he does his best to ride his way to his delivery point.

Premium Rush is interesting because it not only tells the story with just the right angle, but the cinematography, which feels like you’re riding on the streets of Manhattan yourself, is stunningly immersive.

Gordon-Levitt and co-star Dania Ramirez both have some great scenes, but Shannon steals the film almost every time he’s on screen. Shannon plays his role with vivid and surreal determination, and at the same time, inspires a level of pity for his foolish, destructive character. Most of all though, Shannon plays this wired cop with a level of comedy that perfectly matches the film’s sense of humour, and that is ultimately what I really loved about Koepp’s work here.

Features on the Blu-ray include the brilliant Behind The Wheel look at how the film was shot using unique camera rigs, in addition to stunt riders for some of the more challenging scenes.

Another big film from last year’s Toronto International Film Festival was Pete Travis’ Dredd, a fresh reimagining of the comic book series Judge Dredd, which unfortunately had a failed adaptation a number of years ago that I’m happy to forget.

Dredd stars Karl Urban as the helmeted, futuristic cop, Judge Dredd, who acts as judge, jury and executioner to the terror-ridden streets of the mega, Mega-City One. The decrepit city doesn’t have enough Judges to police the streets, so drug dealers, thugs and gangs rule the mega structures that dot the landscape.

As Dredd tests a rookie named Anderson, played by Olivia Thirlby, who is also a gifted telepath, the two enforcers walk into Peach Trees, a mega structure controlled by Ma-ma, played by Lena Headey, and her clan, who want to destroy the Judges in an effort to protect her drug operation making a substance known as Slo-Mo. The trick of the drug is that it makes the user feel like time has slowed down to a crawl, which has been brilliantly rendered by cinematographer Anthony Dod Mantle.

Mantle, as the filmmakers explain in the features, uses closeups to his advantage, and in 3D, especially during the Slo-Mo sequences, that makes the film look gorily beautiful.

While the story is a bit flat, it’s paced well, and delivers Dredd as a serious action hero, thanks to a no-nonsense portrayal by Urban. If you love solid, brutal action, Dredd is a new classic that draws unmistakable comparisons to action titles like RoboCop and the original Terminator, in the best ways possible.

Blu-ray features are worth checking out, and include a look at the comic book, in Mega-City Masters: 35 Years of Judge Dredd, and the inspiration for the film, plus features on the visual effects and 3D, which offers a detailed look at the cinematography as well.

Director Tim Burton brings his classic story about a boy and his dead dog to new life in the Disney stop-motion film, Frankenweenie.

Drawing on the exact images and themes from the original live-motion short, Frankenweenie retells the Frankenstein story through the eyes of a young boy–Victor Frankenstein, voiced by Charlie Tahan–who has just lost his dog, but decides that science can help him bring Sparky back to life.

When his classmates learn what Victor can do, they decide to try to bring their pets back as well, but that ends up causing a lot of trouble as they instead end up bringing back crazed monsters.

Burton’s beautiful stop-motion work looks remarkable once again, and the supporting voice work by Catherine O’Hara and Martin Short, just to name two of them, makes the film work as an homage to classic movie monsters.

Frankenweenie is a lot of fun, especially for older audiences, and despite its darker elements, it works well as a kids’ film because it’s still very cute and funny.

Check out the Blu-ray features for a look at the original short, and best of all, a look at how the filmmakers bring the little maquettes to life.

Despite some awkward storylines, and the occasional routine that just didn’t work, Smash was one of my favorite shows last year, and that’s because it’s packed with incredible talent.

Smash stars Katharine McPhee as Broadway newcomer Karen Cartwright, a wet-behind-the-ears talent who can out-sing just about anyone. When she tries out for a major musical about Marilyn Monroe, she has to fight for the part against Ivy Lynn, played by Megan Hilty, a long-suffering actress who is still waiting for her big break after years on stage.

While the main plot plays out between the frenemies fighting for the same role, as the musical is being developed, the main story is about the struggle to get the production to stage as writer Julia Houston (Debra Messing) and composer Tom Levitt (Christian Borle) try to bring the music and script together.

Starring Jack Davenport as Derek Wills, plus Anjelica Huston as Eileen Rand, Smash hits the right notes, if you’ll excuse the pun, and has the kind of songs that make you wish this actually was a real musical. McPhee and Hilty’s voices are wonderful, and the soap-opera level of the drama actually works on a level that reminds me of Rock of Ages.

Best of all, to me at least, Smash avoids mimicking the likes of Glee, which makes the show feel like a breath of fresh air.