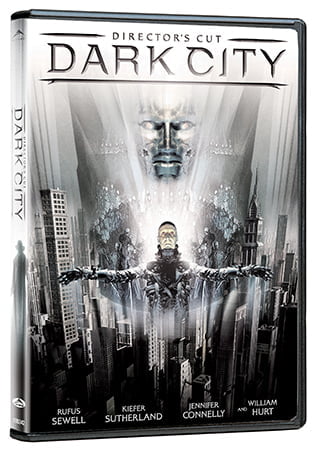 Dark City (Director’s Cut)
When Dark City was originally released, it was perhaps inevitable that it would get a little lost among the releases that year. As film critic Roger Ebert explains in his commentary, there were other bigger films released after Dark City, and with the film’s strange, far out theme, and the almost too intelligent concept, it becomes a bit of a hard sell for your average filmgoer.

But the film still managed to find a home on DVD, and gained a strong following over the years. Now, with the release of the director’s cut of Alex Proyas’ film, fans can finally get the ultimate upgrade with an enhanced, honed story, that actually makes Dark City even more intense.

Rufus Sewell is amnesiac John Murdoch, who wakes up in a hotel bathtub with a dead woman is laying on the floor with spirals carved into her skin. Without any memory of how he got there, John rushes out of the hotel to try to figure out what is going on, even as three “Strangers” arrive at the hotel and start to chase after him. At the same time, Kiefer Sutherland plays psychologist Daniel Schreber, an awkward sort of man who appears to be working with the Strangers..

Also hunting for John is Inspector Frank Bumstead (William Hurt), who is called in to investigate the case of the murdered woman, and John’s wife Emma (Jennifer Connelly), who hasn’t seen her husband in days, but doesn’t believe he could be capable of murder.

There are so many things that I love about this film, from the stunning visuals, and epic sets, to the gorgeous art direction. But it is also the small things that stand out for me. For instance, the Automat scene is a minor element, but it pops off the screen – and even seems to offer some intense symbolism into the film’s premise.

With the director’s cut, Proyas also reverted some of his editing choices that were originally added to make the film more palpable as a commercial venture. These were choices that he concedes were used to “dumb down” the film at the request of the studio, and without them, the film absolutely hums with intensity.

The director’s cut also includes three documentaries on the film: a making-of, an introduction by Proyas, and a really thoughtful piece called “Architecture of Dreams” which has five people giving their impressions of the film, including Ebert, Proyas and film teachers. There are also three commentaries, one with Ebert, another with Proyas, and the best of all, writers Lem Dobbs and David S. Goyer, which explains a lot of concepts behind the film’s story.

Lastly, it’s worth mentioning that Goyer is also the writer behind The Dark Knight and Batman Begins.

Smart People
Starring Dennis Quaid and Ellen Page, Smart People is a wannabe-hip dramatic comedy about a college professor who is seemingly hated by everyone around him. Page plays Quaid’s daughter, one of her father’s only supporters, while Thomas Haden Church stars as the the adopted brother who helps throw Quaid’s character over the edge.

Critics were evenly split on the film, for the most part, decrying it for recycling age-old clichés, while praising it for its clever dialogue and characters.

“Call it a ‘could see’,” Richard Schickel of Time Magazine wrote, “something you can drop in on when you have nothing better to do and emerge from feeling not at all cheated by the experience.”

One Missed Call
With far a grimmer outlook comes the latest Asian-adapted Hollywood film about young people dying for no good reason. Shannon Sossamon is Beth, the psychologist-in-training, whose friends are dropping like flies after getting a call from themselves in the future. Worse yet, Beth is afraid that she’s next.

Setting itself apart from pretty much every other film, One Missed Call has the peculiar distinction of receiving a perfect 0% from Rotten Tomatoes.

“The worst part about this movie is that, even though it’s impossible to piece everything together logically, it’s easy to see where it’s going because there’s nothing new here,” James Berardinelli wrote in his review at ReelViews.

Watching The Detectives
Also out this week is the odd film noir comedy Watching The Detectives, which stars the very talented Cillian Murphy as Neil, a movie nut who gets caught up with the action-packed Violet, played by Lucy Liu. With non-stop references to some of the best and worst movies ever made, the film is essentially a lot of silly fun. Robert Bell at Exclaim! calls it “often bizarre and slightly uneven,” while later adding in his review that it’s, “a pleasant diversion but nothing more.”

The third, abbreviated season of Prison Break arrives with a mere 13 episodes thanks to the Writers Guild of America strike. Also arriving on DVD is the eleventh season of South Park, and the first season of Caroline in the City.