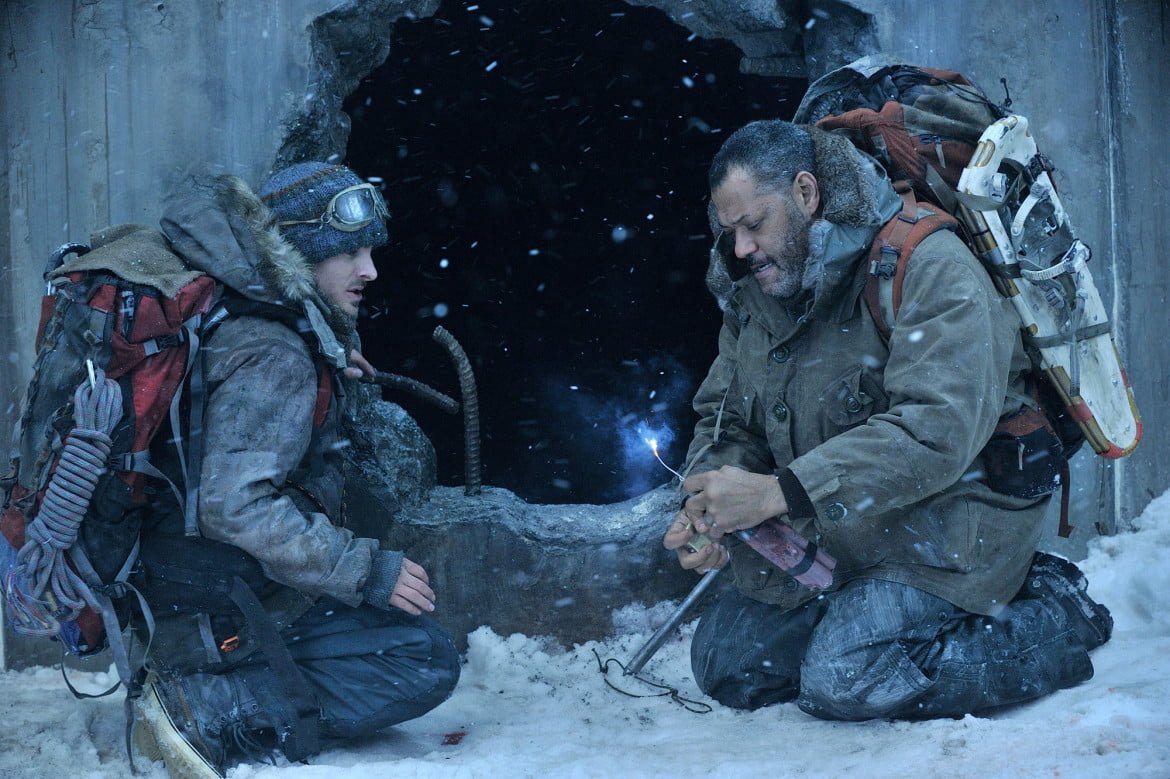 Writer and director Jeff Renfroe’s The Colony is one of the best-looking action films Canada has ever produced, but it has the kind of script and concept that you might expect from a direct-to-DVD Hollywood prequel. Where the film manages to surprise is in the casting, and some of the hell-bent villains that bring much-needed action to the second half of the story.

Kevin Zegers stars as Sam, a young would-be hero living in underground bunkers at Colony 7 with the rest of his weird little community in the year 2045–years after climate control has actually turned the planet into one giant ball of ice.

In colony 7, people do what they can to survive–using remaining technology to grow plants, keep animals alive for fresh meat, and live their little lives, but their little community grows smaller every day as sickness is slowly picking people off. When a distress signal comes in from another nearby colony, the group’s leader, Briggs (Laurence Fishburne), takes an small expedition to find out what happened.

After trudging through the snow, the group discovers that a psychotic group of cannibals has devoured their neighbours, and now colony 7 is going to be their next target. This sets up the bloody, violent, and action-packed final chapter of the film, which is definitely the high-point of The Colony, thanks largely to cannibals that looks like they are ready to chew on anything that gets in their way.

If the whole film had managed to be creepier, and a bit more kick-ass, The Colony would have been a must-see in my books, but the rote dialogue, and the paint-by-numbers script make the film painful, especially any time that Mason, played by Bill Paxton, appears on screen. His character is not alone though, and it’s only Fishburne’s general attitude that makes him stand out, despite the script.

Kevin Zegers and Charlotte Sullivan in The Colony

For all the low points, the film has some fun. The filming locations, in an old NORAD base and sets that look like they’re actually snow-bound, are perfect, and the special effects are excellent almost across the whole film. I also really enjoyed Zegers, Fishburne, and Charlotte Sullivan, the last who play’s Zegers’ love interest, Kai. Between the three of them, who I consider the real leads of the film, The Colony has some great moments, especially once guns start booming and blood starts flying.

Those positive points even make it easy to see why there was a plan to turn the film into a franchise, but The Colony has a lot to prove to audiences, and it’s difficult to be forgiving these days when there are so many franchises, and big budget films.

As a step toward more commercially successful films being made in Canada, I like aspects of The Colony, but before anything else like it goes to production, I hope more work is done on creating the story, the characters, and especially their dialogue. Bill Paxton can be a great actor, but his character is a rip-off of dozens of other, better, villains and quasi-villains.

Translating a script into a great film is a big enough challenge as it is, but making a great film with weak dialogue is impossible, so any action films coming up in Canada better get that right before they even decide to start film. It’s unfortunately already too late for The Colony, and that may have just cost Canada its first real action franchise.