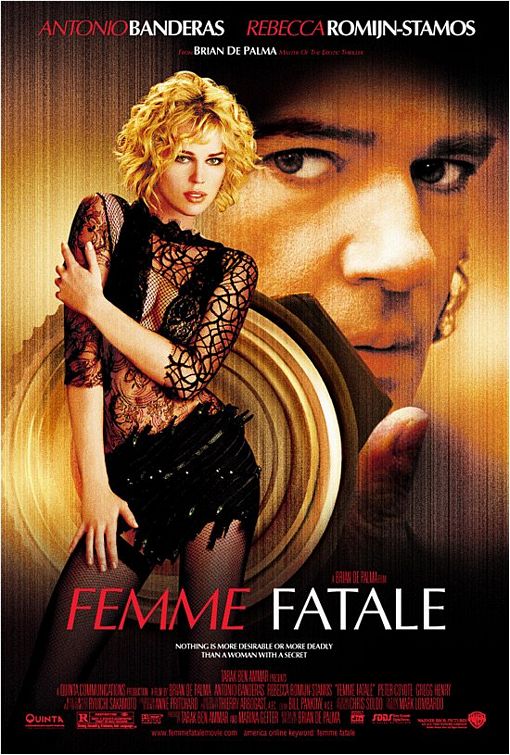 Call it a sexy thriller, a heist flick, a character drama, or even a sort of experiential/experimental film noir, but no matter how you want to slice it up, Femme Fatale is one devilish good time that will give you a little bit of everything before you walk away, wondering what to think.

From start to finish, the film seethes with sex and setups that almost look like a porno, but that’s practically just a dressing that gets added in to spice things up since the main plot and scheme of the film is much more expansive than that. In fact, I have to admit that I don’t think I was expecting what director Brian De Palma does with the story and characters here. Other directors might have wasted away parts of this story that could be boring or too simple in someone else’s hands, but De Palma uses everything in the film to layer up an intricate tale that is really just about a woman who has the chance to change her stripes.

So, while the concept is simple, it’s De Palma’s sweeping efforts that bring everything together in a much more enticing and complicated tale that starts with a very intense scene that has Laure Ash, a character that Rebecca Romijn-Stamos brings to life in every way, using her sexy allure to help pull off a jewel heist. Within those first 15 minutes, you can’t help but feel like you missed some other movie that came before this and you’re just getting to the climax of that film, but, that’s just part of De Palma’s genius in telling a story that toys with you and your usual expectations.

From there, we see Ash slipping away into the night as all hell breaks loose behind her. Throughout the film, that’s generally the effect she has everywhere that she goes, witnessing everything from bar fights and attempted murders to a suicide.

Somewhere in there, amongst a jump in time that whisks us 7 years into the future, we meet Nicolas Bardo, played by Antonio Banderas, who turns himself into this slightly oddball, and fairly naive, photographer who happens to get the assignment that jumbles his life up with Ash, who’s now living an assumed life that has her married to an American ambassador. Slowly, almost comically, Bardo gets sucked into Ash’s weird story and finding himself caught so that he can’t really find a way to escape. And that’s exactly where the story jumbles and bumps along – taking the strangest turns at the exact moment you might have thought you understood what was happening.

In the style of a sedated David Lynch film, De Palma whisks you around with action, comedy, sex, and drama that will leave anyone panting just a bit. This is one of those instant classics that only a man like De Palma could create, and even when you’re laughing at some of the odd things that happen along the way, you can’t help but fall just a bit more under his spell until you find, by the end of the film, that you’ve lost yourself in something far bigger than you expected for a sexy heist flick.

In terms of performances, I have to admit that I loved both Banderas and Romijn-Stamos. They can both be extremely sincere, deceptive, and most of all, funny. Between them though, Romijn-Stamos definitely does the better job with her part. Banderas is a surprisingly great actor and has some amazing moments, but Romijn-Stamos does things with this role that I never would have expected from her. In fact, if this film doesn’t get her a nomination for an Oscar next year, I’d be extremely surprised and disappointed. Likewise, I’d say it stands a good chance of landing De Palma a directorial nomination for the Oscars too.

So, when you get the chance, go out and see this film. Forget about all the other films you have the chance to see. Take a chance on something more inventive that is likely to at least leave you thinking a bit. It’s also got some of the best cinematography that I’ve seen at the film festival and you might even find that it makes a good date movie, as long as your significant other enjoys naked women, chase scenes, and thriller-intrigue.