‘Transformers’ rolls out for new action 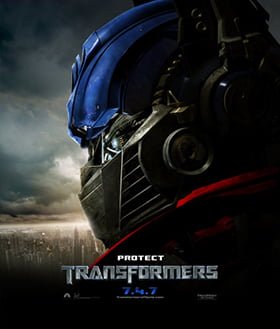 Michael Bay may never win an Oscar for the best movie of the year, but there’s never been a question about his ability to make any action movie, however crazy it might sound, into a knock-out blockbuster. With his latest film, the instant popcorn classic Transformers, he brings our favorite cartoon robots from the 80s back to life with all the cheesy lines and explosive action that you could ever want.

Fans of the original series, and the Hasbro toys, might have the fear of disappointment lurking in their hearts but Bay delivers a film so loyal to the original that even the sound effects are just updated versions from the original show. Even Peter Cullen, who has voiced Optimus Prime in everything to date, returns as our fearless hero.

It’s a film that takes the original material to heart, reinvigorates it, and puts it on screen. Cheesy jokes and all, with some of our best loved Transformers present, including Megatron, Starscream, Jazz, Ratchett, and Bonecrusher.

Bay and script writers Roberto Orci and Alex Kurtzman know what the audience wants to see and leap right into the first big round of explosions within minutes of the opening credits. The film is barely underway when an unidentified helicopter arrives at a military outpost in the Middle East and transforms into a towering robot that destroys everything in its path. Only one small group of soldiers manages to escape, led by Sergeant Lennox (Josh Duhamel).

From there, the action only gets bigger and more intense. That’s why Transformers works as an action film, but the film also revolves around the story of a boy and his sentient transforming car so we get a lot of introduction to Sam Witwicky (Shia LaBeouf) and his love, or maybe lust, for classmate Mikaela (Megan Fox).

When Sam discovers that there’s more than meets the eye to his used yellow car, better known as Bumblebee, he and Mikaela are dragged into the battle for an object known as the Allspark. The Autobots, our heroes led by Optimus Prime, want to find the Allspark to keep it safe, while the Decepticons want to find it to wreak havok on planet Earth.

In terms of plot, there isn’t much more to the film than that. Orci and Kurtzman are more interested in snappy lines and finding as many opportunities as they can to get the big robots fighting. To their credit, the concept works, and you can hardly expect anything more elegant or intellectual from a movie sporting this many explosions, fast cars, and battling intergalatic robots.

The film is of course helped along a good amount by the special effects and all of the battle sequences, which are absolutely the best of the year. There are more battles and stunts than even I expected, and the robots take out whole city blocks in their rampages. As a movie fan you know that most of the scenes are digital compilations of real effects and computer graphics, but Transformers blurs the lines so well that you would have a hard time picking out which are which.

Equally remarkable is the fact that the cast is actually quite good. LaBeouf is an absolute star as Sam, and Fox is a great love interest. Josh Duhamel plays a convincing Sergeant, Rachael Taylor is the tough but cute techie Maggie Madsen, Jon Voight kicks butt as Defense Secretary John Keller, and John Turturro is hilarious, and even fairly menacing at times as the governmentâ€™s Agent Simmons of the secret agency Sector 7.

Bay’s direction, along with his amazing crew, is what really makes Transformers live on screen, and makes even the most ridiculous lines and actions work. Cinematographer Mitchell Amundsen makes the visuals pop with dramatic angles, Optimus Prime jokes and then practically tip-toes across the screen like he’s some giant kid trying to avoid being seen, and yet he looks and moves perfectly.

The touch of executive producer Steven Spielberg can also be felt on Transformers as Sam and the almost child-like Bumblebee bond throughout the early part of the film. It seems likely that it’s also Spielberg who invests the Autobots with so much genuine personality and comic abandon, which also seem fully invested from the original cartoon.

And for a film that’s over 2 hours long, Transformers is an unusually slick film that pauses only long enough to crack wise, crack metal skulls, and then crack buildings apart before moving on to a new playground. It’s like watching kids move their toys around a sandbox – constant action and only the biggest stunts will do.

In a summer devoid of more than a few movies worth mentioning, Transformers is the popcorn flick to rival all the other geekily delicious titles we’ve seen this year. It may never win Bay a Best Film Oscar, but there’s no question that it will win over Transformer fans… especially if it means a whole franchise worth of films ahead.