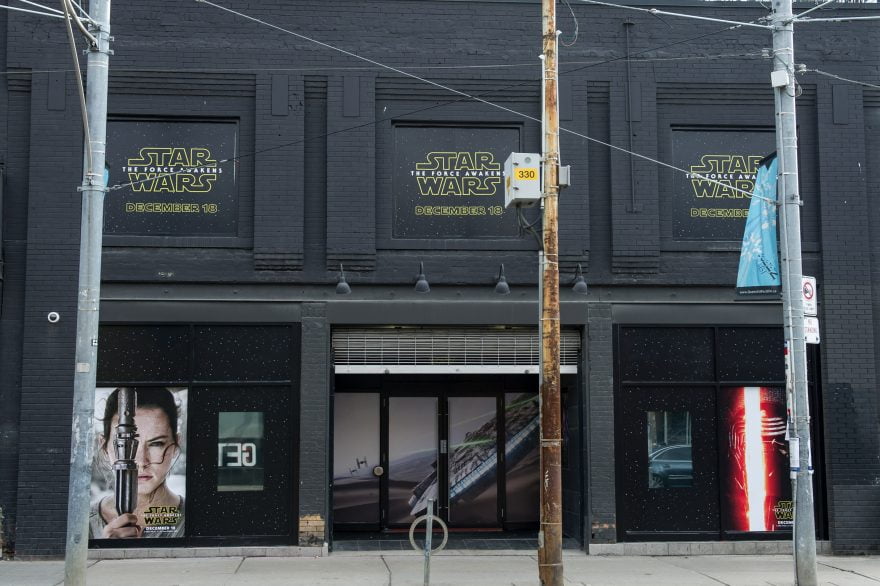 If you notice a strange sensation while walking along Queen Street in Toronto this month, don’t be alarmed, it’s probably just The Force.

The pop-up exhibit features life-size replicas made by Prop Shop, a British company that also contributed its work to the film, and it’s completely free and open to the public from 11:00 AM to 7:00 PM, starting on December 5th to the 21st.

There’s Rey, the hardened desert scavenger, and her rolling droid sidekick BB-8; Captain Phasma, who rules the First Order’s troopers in her metallic armour; Kylo Ren, a dark warrior with a badass matte black tunic and a cool lightsaber; and, of course, a classic Stormtrooper. (If you’ve always wondered how you size up against a real-life trooper, now’s your chance.)

There’s also a photo station where you can pose for a selfie with BB-8, everyone’s new favourite drone. Need more physical evidence of your fandom? You can pick up one of the limited-edition t-shirts for $25.

This is the only North American stop for the exhibit, which will also include themed days, special guests and giveaways. Walt Disney Studios Canada will announce dates and details from their social platforms, so follow along and join the conversation by using the hashtag #TheForceAwakensTO on Facebook, Twitter, and Instagram.

The Star Wars: The Force Awakens pop-up Exhibit in Toronto is a great place to get excited for Episode VII, which, if the trailer is any indication, is going go be epic. See you in theatres.