My childhood came back to me in a wave as I watched the opening crawl of Star Wars: The Force Awakens yesterday morning. It’s like I’m a kid again, and someone has planted me back in this universe a long time ago in a galaxy far, far away.

The feeling slowly passes as I watched the new film from director J.J. Abrams, but it’s so tangible to begin with that I had to remind myself that this was a brand new film.

Abrams deserves a lot of credit for capturing the essence of the original Star Wars films and bringing that piece of my childhood back to life, and finding a new thread in this universe. Much like his success with Star Trek (although many Star Wars fans may not want to talk about that), Abrams has found a way to reinvigorate this movie franchise that suffered so horribly with the prequel trilogy that made such a mess of the story.

The trouble comes about a third of the way through The Force Awakens when I realize that, while the film is ultimately satisfying, rich, and cleverly told, it’s also really just a bit too familiar.

No, I don’t intend to ruin the film for anyone, but I’m going to reveal more than Disney did to date because I can’t really review the film without talking about some specifics. You’ve been warned. 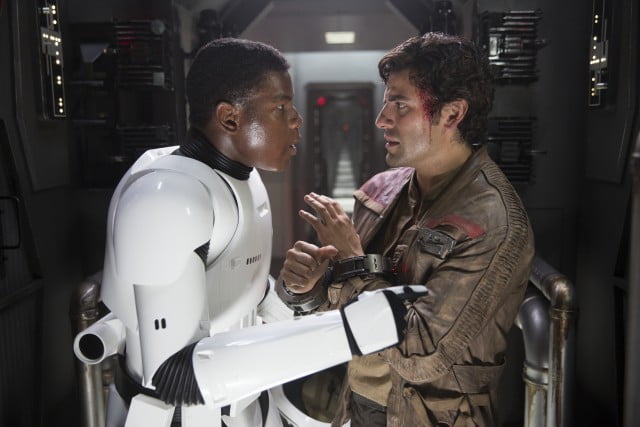 John Boyega plays Finn, a First Order stormtrooper who is having a hard time with his job description: mainly, killing innocent people. The First Order is the group that has taken over the galaxy since the end of Episode VI, and they’re a force that wreaks devastation wherever they go.

Vowing to escape, Finn runs into resistance fighter Poe Dameron (Oscar Isaac) after he’s captured and the two escape together to find a valuable piece of information: a map that leads to the one and only Luke Skywalker (Mark Hamill), who has gone into hiding.

That’s where Daisy Ridley comes in as Rey. Rey is a scavenger who is thrust into this adventure only because BB-8 shows up and needs to be rescued, and the droid is carrying the map that leads to Skywalker–something that both the Rebels and the First Order want desperately.

From there we remeet most of the familiar faces old-time fans will expect. Harrison Ford returns as Han Solo, Carrie Fisher is General Leia Organa, Peter Mayhew plays Chewbacca, and Anthony Daniels is C-3PO. Watching them on screen it’s almost like meeting old friends again, which is a huge testament to these actors.

There are lots of new faces too, including the excellent Adam Driver as the twisted Sithian, Kylo Ren, but the story certainly revolves around the characters from the original films.

Playing with the roles, and even their weapons and relationships, we see immediately where these old friends have ended up. It’s like a big family reunion, and Abrams and the cast obviously had a lot of fun with even some of the quick asides. For older fans, this is what we came to see, but it’s disappointing to some degree too, if you’ll bear with me.

We’ve waited decades for a great new Star Wars film, and the result is beautiful, iconic, and moving, with a fresh set of faces that are invigorating from start to finish, but if you’ve seen the original films you already know the basic plot. It’s hard to sit there, as you figure out where things are headed, and not get a little annoyed at the film and filmmakers.

The Hobbit franchise had huge issues, but the biggest one was how it tried to recreate the mood, tone, and even some of the scenes of the Lord of the Rings films. This is a tough thing to do correctly, and The Force Awakens certainly retreads this familiar story well, but there’s no way to mistake that it’s like reliving the same story again.

Let’s talk about the good stuff though. The script by Lawrence Kasdan, Abrams, and Michael Arndt is quick and lithe, and sharp. There’s just enough story to keep the film moving, which follows Abrams usual method of making relationships more important than describing weapons or politics. There are even stormtroopers that seem like they can actually hit a target, who have emotions and identities, which is kind of a big deal. This is where Abrams shows his strength, in managing to humanize simple characters like the stormtroopers.

The cast is pretty much perfect as well. Boyega is a natural star, and he brings a levity to Finn that is passionate, while still maintaining a fairly grim perspective on the world and the threat of his former cohorts.

A scene from Star Wars: The Force Awakens

Then there’s Ridley as Rey. I found it impossible not to like this character, and her, and you’re immediately drawn in because Rey is so obviously one of the toughest people in the film. Ridley and Boyega also have some great chemistry going on, which is the backbone of their whole story arc.

Kylo Ren, played by Adam Driver (who I still admire greatly just because of his role in The F Word [AKA: What If]) is another huge favorite. Driver’s voice is perfect as Ren, but there’s a lot more to this character once you get behind the mask, and I appreciated how the actor managed to make that performance feel grounded.

On the other hand, I had a hard time understanding why Bill Weasley was so angry. He seemed to be under a lot of stress, I suppose.

I don’t want to downplay actor Domhnall Gleeson, but he was the least believable actor in the film, and General Hux is one of the few characters that seemed blindly motivated, with no backstory to help invest us. Why do we even care about Hux, and why is his character necessary? Perhaps I missed something, but he seemed like an empty figurehead.

Now I can’t help but wonder if the plan is just that Abrams and Disney want this to be the springboard for the new franchise, and they decided to play it safe. Fans will obviously be a bit pleased to see the franchise re-start with something familiar, and anyone who hasn’t seen the original films will be coming in fresh. Once the series is a huge hit, it’s a bit safer, perhaps, to go off in new directions.

That idea makes me feel very hopeful because I think Abrams, to some degree, did that with Star Trek, but the problem is that there’s really no indication in The Force Awakens that that’s the plan. For all I know the new trilogy will just play it safe and copy storylines for a while, and that would be truly, terribly unfortunate. Not to mention downright lazy.

For that reason, and that reason alone, I couldn’t rate The Force Awakens higher. Standing alone, the film is so much fun and so enjoyable that I would have liked to give it a bit higher grade, but it’s just not original enough.

For big fans, that may be both a blessing and a curse, but we won’t know really how daring Star Wars is willing to get until Episode VIII comes along in 2017. This is a good start though, and as a step towards next year’s Rogue One: A Star Wars Story, it will have fans salivating for more.