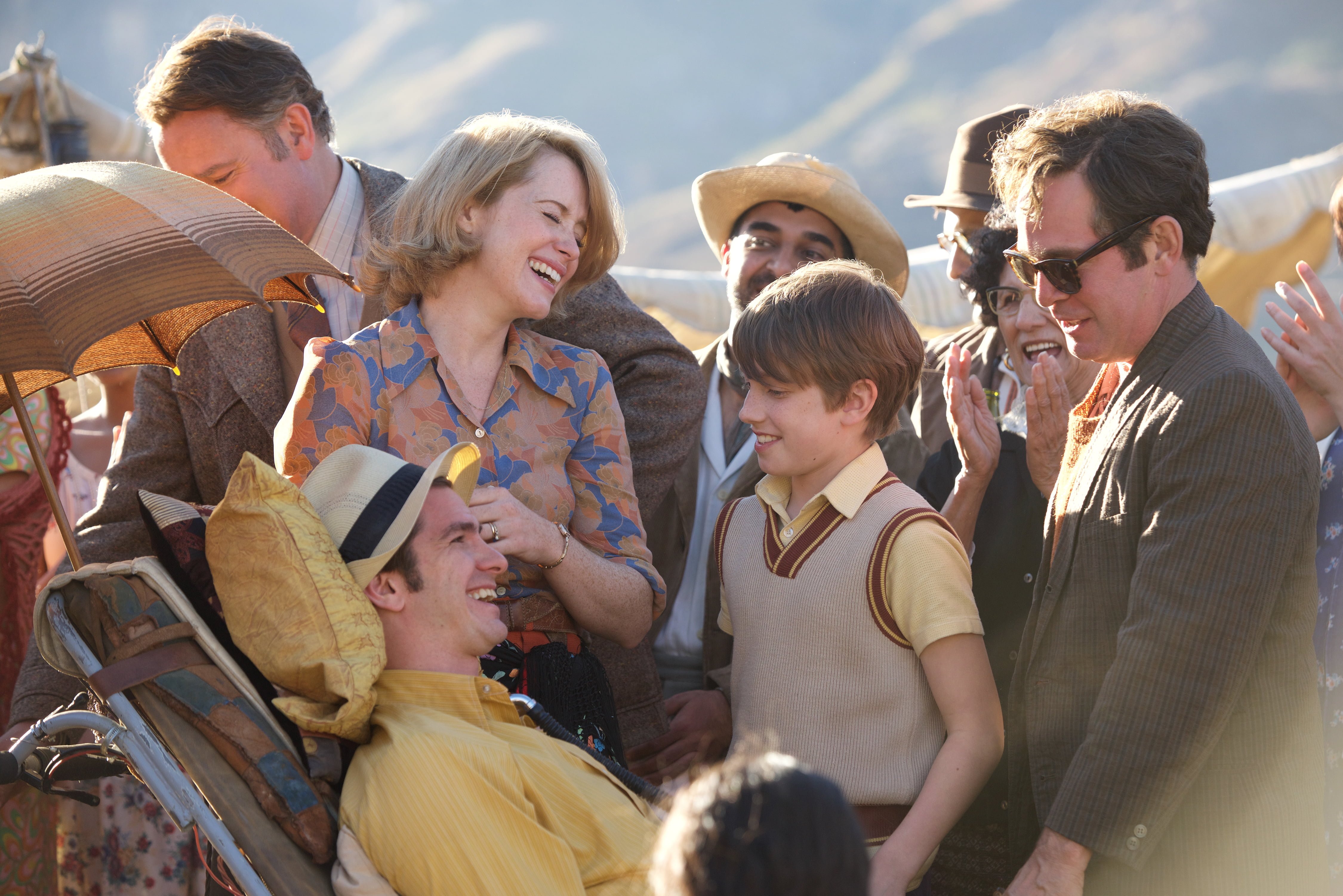 What happens when the curse of Polio strikes a young man, who has everything to live for, and leaves him paralyzed in an iron lung? In director Andy Serkis’ Breathe, the real-life tale comes to beautiful, heart-rending life with Andrew Garfield playing Robin Cavendish, and Claire Foy as Diana Cavendish, his wife who would essentially help him live again.

Robin Cavendish was struck by Polio at the age of 28, but his life would lead to incredible advances for the paralyzed, and in this film, Garfield and Foy bring powerful life to a tough story.

During the 2017 Toronto International Film Festival last month, I had the chance to sit down with Garfield and Foy to find out how they dealt with the story and stepping into this real life story. Garfield also discussed the complications of playing a role that limits his performance to just his face, and the deeper implications of the story. 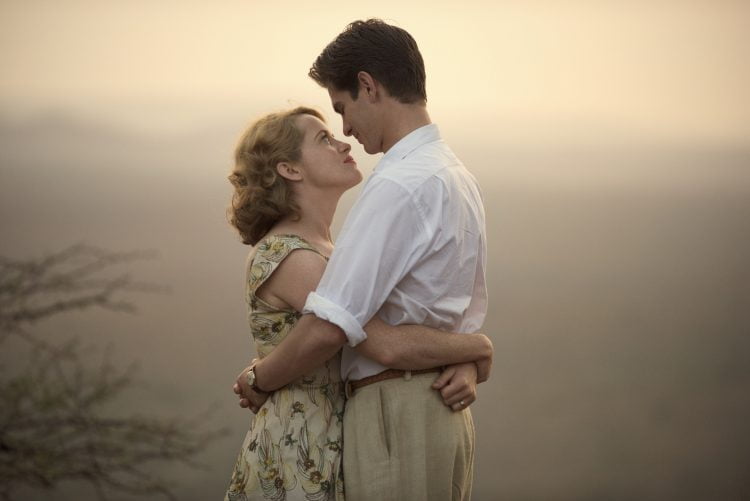 Claire Foy: “[During the premiere at TIFF] I suspected I would probably lose it, but I found it very emotional because I knew that Jonathan [Robin’s son] was there, and that Diana [Cavendish] was there as well. And every time… I kept having a repetitive thought that–he sat just there, he sat just there, he sat just there–which just made everything even more amazing. And also, I hadn’t seen it for a long time, and I just relived it again and I cried all the time there as well when we made it, so, yes, I’m a crier.”

Andrew Garfield: “Goodness. Well I think it was very important obviously that this relationship be sincere and authentic and because it is obviously the heart of the film–the fact that these two kind of share a heart. It’s a weird thing that they kind of became the same person in a way or an extension of each other, but not in an unhealthy way. They strangely managed to do it in a way that felt very, very healthy and somehow independent, even though they were totally dependent on each other in terms of making meaning in their life. But somehow it felt very boundaried. I don’t know how they did it. So I think that was the most important thing. But luckily I really am fond of Claire…”

Garfield: “I am underplaying how I feel for the sake of press, but if you’d like I can go further. But that actually was the simplest thing–the love. And so then we were able to play a lot with each other for each other and to create a more kind of textured, nuanced, dynamic because I think the love was so strong from the beginning that we could kind of go anywhere together.”

Andrew Powell: The story is so powerful, but I wondered if you needed any convincing to take this role, because obviously you spend so much time immobile that your face has to be the whole vehicle; so did Andy Serkis have to convince you to take this part or how did that happen?

Garfield: “Well, no I read it and I thought well this is a beautiful story that I want to be a part of telling, and then it’s a stunning character, and a stunning man. And I found him so beguiling and charming and so full of hope and full of a kind of wisdom of how to live, and that was really the main draw for me was, ‘oh, he figured that out.’ He figured it out how to live a life of meaning and joy, and connection and truth and beauty and love and creative community.”

“These were all things that I want my life to be like, so it was really kind of apprenticing to Robin Cavendish in a way. The only convincing I needed was from Jonathan really that he thought that I was the right person to play his dad, and the fact that he was convinced of that meant that I needed no convincing.”

Foy: “I think the amazing thing about the story is, what was the other option? The other option wasn’t to stay in the hospital. That was not an option. And even though it seemed impossible to leave they had to try. And even if he literally died trying, it would have been worth it. And that’s the thing, isn’t it?”

“And I think, ‘God, to have that courage’ and to have just the bravery because they weren’t not terrified and they weren’t not scared and probably thought about everything that could possibly go wrong, every single step of the way. I’m sure that they probably did.”

“But I just think to have the courage to say, well, what’s the worst that’s going to happen? We might as well dive off the deep end. I mean I would love to be able to do that a bit more, and it lead to some amazing change in the world. It would be great.”

Journalist: In a time when romance is sort of defined by heart emojis, do you think that old fashioned unconditional love still exists?

Garfield: “Yeah it’s definitely possible. I think we are being conditioned away from it. So it’s a choice. It has to be a choice whether to go for something that we know to be possible and you know to be true or to go along with what kind of capitalism asks us to go along with, which is to kind of disconnect from each other, not to accept all of our icky bits, and other people’s icky bits because of that.”

“How do you say no to a society and a culture that is telling you this is the way to live, where, in your soul–in your gut–you know something terribly wrong is happening. Even if you don’t know it consciously you know it… your anxiety tells you we are in an age of anxiety because of these devices and because of our superconnectivity, I think, and it creates a shallowness. It creates a two dimensional shallowness in terms of how we connect to each other. And I think this is harking back to a time where that kind of intimacy, that kind of devotion, was a much easier option, perhaps. Disagree?”

Foy: “So devotion was easier?”

Garfield: “No, I think we are encouraged away from that kind of depth of connection.”

Foy: “Oh, no we definitely are. But I must say, and I don’t know whether this is because I’m a parent and have a child; I really have hope for the future, and not because… I think all the things that society has constructed are things that people can live without, and that’s fine, and I think at some point we’re probably going to have to, which would be amazing.”

“But I think that my child’s generation, as far as I’m concerned, have all sorts of–not opportunities–but they’re being raised differently. I intend to raise my child to be open and understanding and realize that everybody is the same, and that there’s equality and you don’t hurt other people and if you do, you apologize and you realize what you’re doing and you’re conscious of what you’re doing and I think I know that I have an understanding of myself, not just as a woman, but as a person that my mother was never given the opportunity to have. That my grandmother was never given the opportunity to have. That I’m thinking about things that none of my family ever had the opportunity to because of the conversations you’re allowed to have [now].”

“I mean, I doubt Audrey Hepburn ever was able ask a question… I mean I just think things are more open, and as well as there being obviously negatives, I think–I trust the fact that all human beings will all come together and unite and be nice and kind.”

Garfield: “I watched [the film] for the first time last night in a long time, fully done–I’d never seen it fully done with music and everything–and that was one of the things that struck me deeply which I was happy about was I could see the man and everyone around him not accept the limitations that they didn’t have to, but, you know, treat the limitations that were inescapable, as just that. They are fate. That is my fate. I can wish away this, but it’s never going to happen so let’s focus on the things I can change.”

“And I found that to be very moving actually–that is why it is a universal thing. We all have some manifestation of limitations. Some fate that we are dealt. Each human being has something that they have to surrender to. And then there are limitations that we all have that we are able to dismantle if we focus on them enough and kind of, as you say, kind buck the system and do the work to to break through them. But in terms of the playing of those limitations it was strangely liberating and joyful and strangely.”

“There was a real lack of self-consciousness, I think. And I think he was living on that precipice of life and death every moment, especially, you know, the numerous accidents and kind of tragic misses that they have had as a family with his ventilator that you know, [someone] sort of picks up the bag and starts squeezing oxygen into your lungs, and you go, ‘Oh, this could be the last one. This could be the last one.’

“I mean I’d be terrified of what comes if someone falls asleep while squeezing the bag, but it’s also wonderful–I get to have this breath that she’s giving me, or my son is giving me. It’s a literal manifestation of the metaphor of these other people giving you life. There’s something so profound about that.”

“In the playing of it, I did find it very liberating. I found it imaginatively liberating. I wasn’t worried about what my face was doing because all of the energy from the body started to just come out in the face and in the eyes, and in an attempt to communicate it creates a need because I don’t have my body to express and I’m a very physical person, as was Robin before the Polio.”

“So, yeah, my face and my eyes became the vehicle and I trusted Andy or Jonathan to say ‘you better dial that down’ but they actually didn’t because you see footage of Rob and you see pictures of him and he was, you know, you see that he was so full of life.”