New on Blu-ray this month, reviews of five of the latest releases: Thor: Ragnorak, Coco, The Dark Crystal, Lady and the Tramp, and Darkest Hour.

Marvel Studios have worked with incredible directors over the years, but bringing in actor and director Taika Waititi was certainly one of their bolder moves as they retooled the Thor franchise to make it lighter, funnier, and one of the most entertaining from the MCU.

Cate Blanchett stars as Hela, the big bad in Thor: Ragnarok, and Odin’s firstborn child. Once upon a time, Hela helped Odin conquer the Nine Realms, but when her thirst for blood and war went too far, Odin imprisoned her. When she escapes though, she’s happy to make up for lost time and sets out to take over Asgard.

At the same time, Loki (Tom Hiddleston) and Thor (Chris Hemsworth) get lost in space, and end up on a trash planet called Sakaar where the ruler, The Grandmaster (Jeff Goldblum), enjoys placing anyone he captures into epic gladiator battles in the arena for all of his subjects to enjoy.

Thor is naturally thrown into the arena to fight, and when he discovers the Hulk (Mark Ruffalo) is also there, he tries to join forces with him, but Hulk has been in control for the last two years, pushing back Bruce Banner’s personality since the battle of Sokovia, and he’s enjoying being the hero of the arena. Thor also meets Valkyrie (Tessa Thompson) on the strange planet, who turns out to be the last surviving Valkyrie alive, but she’s got a few troubles of her own, including alcoholism, apparently.

Waititi’s stylish, comic mannerisms are all over the film, and the script from Eric Pearson, Craig Kyle, and Christopher Yost is fresher and more interesting than nearly everything we’ve seen in the other Thor movies. Thor: Ragnarok is one of the best Marvel movies to date, and it’s fun, fast, and brings some depth and changes to the character and his world.

Blanchett is wonderfully badass as Hela, although she also chews the scenery for half of the film. The character’s weird ability to create and control dozens upon dozens of swords and daggers does not make the most compelling action sequences, but she’s an interesting villain all the same.

Goldblum on the other hand is around to be his most Goldblum-iest self. He has a way of stealing every scene, as usual. I also loved Tessa Thompson as Valkyrie, one of the more fascinating characters in the film, who could have even used a few more scenes if you ask me.

The features on the Blu-ray match the overall mood of the film, with a comical introduction from director Taika Waititi; Finding Korg with Waititi hamming it up once again; a pretty great gag reel; and the return of Thor’s roomie, Darryl, but this time with The Grandmaster moving in; plus there’s extra Goldblum if you need an extra hit of the weird and wonderful actor.

Coco is one of Disney and Pixar’s most moving films to date, and it shows the true power of filmmaking where the strength is not only in the characters, but in their culture, and the world. Coco is a Mexican film through and through, and it features an incredible cast of Mexican stars, with a beautiful, touching story.

Anthony Gonzalez stars as Miguel, a young boy who has a deep love of music, but he has to hide it from his family because it’s forbidden. That all started generations ago when his great-great-grandfather left his family to pursue music. When the Day of the Dead arrives, and Miguel plans to perform in the square for a competition, his grandmother Abuelita (Renée Victor) finds out and destroys his home made guitar. Miguel runs away, and discovers his great-great-grandfather’s guitar in his mausoleum, and plans to take it so he can still compete, but when he touches it, he’s cursed, and sent to the land of the dead.

His only hope to return to the land of the living is to get the blessing of one of his ancestors, but his great-great-grandmother Mamá Imelda Rivera (Alanna Ubach) won’t agree if he plans to keep playing music, so he teams up with a dead guy named Héctor (Gael García Bernal) to find his long-lost relative, the great musician, Ernesto de la Cruz (Benjamin Bratt).

The magic of Coco is in the mix of the family’s story, the beautifully realized characters, and the charming songs. It’s hard to top the magic of “Remember Me”, but the soundtrack and score are wonderful, especially “Un Poco Loco” and “The World Es Mi Familia”.

Pixar have also crafted one of the most beautifully astounding cinematic landscapes to date with the Land of the Dead. The colours are gorgeous and otherworldly, especially in the grand cityscapes, and even in the rendering of the majestic alebrijes–fantastical creatures that help the spirits of the dead.

The Blu-ray edition offers a lot of extras, from features on the characters and an audio commentary, to exploring the initial process of learning about Mexico, the music, and so much more. The extras really broaden how you will look at this beautiful, textured film. 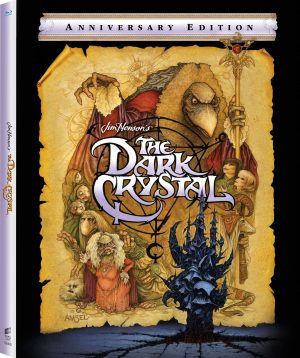 The Dark Crystal is Jim Henson’s iconic masterpiece, and it looks impressive with the new Blu-ray, and 4K Blu-ray releases that came out this week. The film is still an utterly unique, dark, and mesmerizing experience that holds up exceedingly well after all these years, and it’s really wonderful getting the chance to see it again.

Scanning the original 35mm film to upgrade for the new Blu-ray and 4K Blu-ray experience, the visual quality is naturally not perfect, but it’s the best to date, and likely the best we will ever see for the film.

The special features include one new extra, “The Myth, Magic and Henson Legacy – Behind the scenes stories from Lisa Henson and Toby Froud” plus a few extras that were on previous released, including an audio commentary with Froud, deleted scenes, and a look at the Skeksis language with an introduction by screenwriter David Odell. If you’ve never introduced your family to this film yet, or if you haven’t seen it in some time, I highly recommend The Dark Crystal‘s Anniversary Edition. 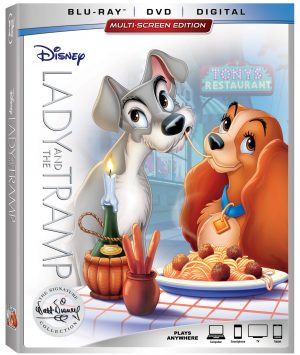 Lady and the Tramp

Another classic that makes the return to Blu-ray is Disney’s Lady and the Tramp, which joined the Walt Disney Signature Collection and offers a batch of new features, and three versions of the film (Blu-ray, DVD, and Digital edition).

The film looks and sounds wonderful on Blu-ray, and it will bring back a lot of memories for anyone who hasn’t seen it in years. The story and the music all pop, and it’s still impressive seeing how well the animators captured the characteristics of the animals they brought to life on screen. Looking back on this lovely classic, it is a great window into another time, when so much love, time, and care was put into every frame of an animated film.

New features on the Blu-ray include “Walt & His Dogs” and “Stories from Walt’s Office” which really give a bit more depth to Walt Disney’s story.

All of that said, Lady and the Tramp includes a couple of culturally inconsiderate portrayals that I think you either need to discuss with your children when you watch them, or skip the scenes entirely until you’re ready to talk about them. This is a classic animated film, but since it was made in the 1950s, our view of the world has thankfully changed dramatically. 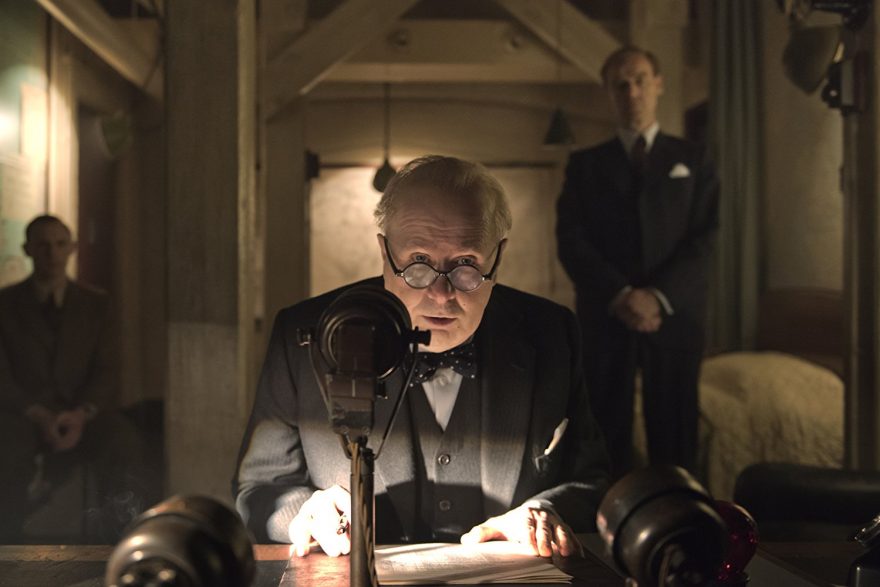 Gary Oldman stars as Winston Churchill in this intimate portrait of one of history’s most compelling leaders as he faced off against the Germans to turn back the Nazi threat. Darkest Hour mainly revolves around Oldman’s performance–although we also see how things happened through the eyes of his secretary, Elizabeth Layton (Lily James)–and while the story is fascinating, it is a little dry at times.

Churchill’s rise to power, and his role during the World War II, are really incredible moments in history, and Oldman captures some of what we know about the great man almost perfectly. From his unwavering determination, to his eccentricities, and even his anger. Whether you know the story or not, this is a great film to admire both the man, and Gary Oldman himself as the perfect actor for this role.

The Blu-ray includes a few features, from a look at how Oldman was transformed into Churchill, to a commentary by director Joe Wright. My only complaint would be that the features could have been a lot more robust, but for history buffs especially, the film stands well on its own.

Call Me By Your Name
The Disaster Artist
Ferdinand
The Handmaid’s Tale: Season One
I, Tonya
Justice League
The Shape of Water