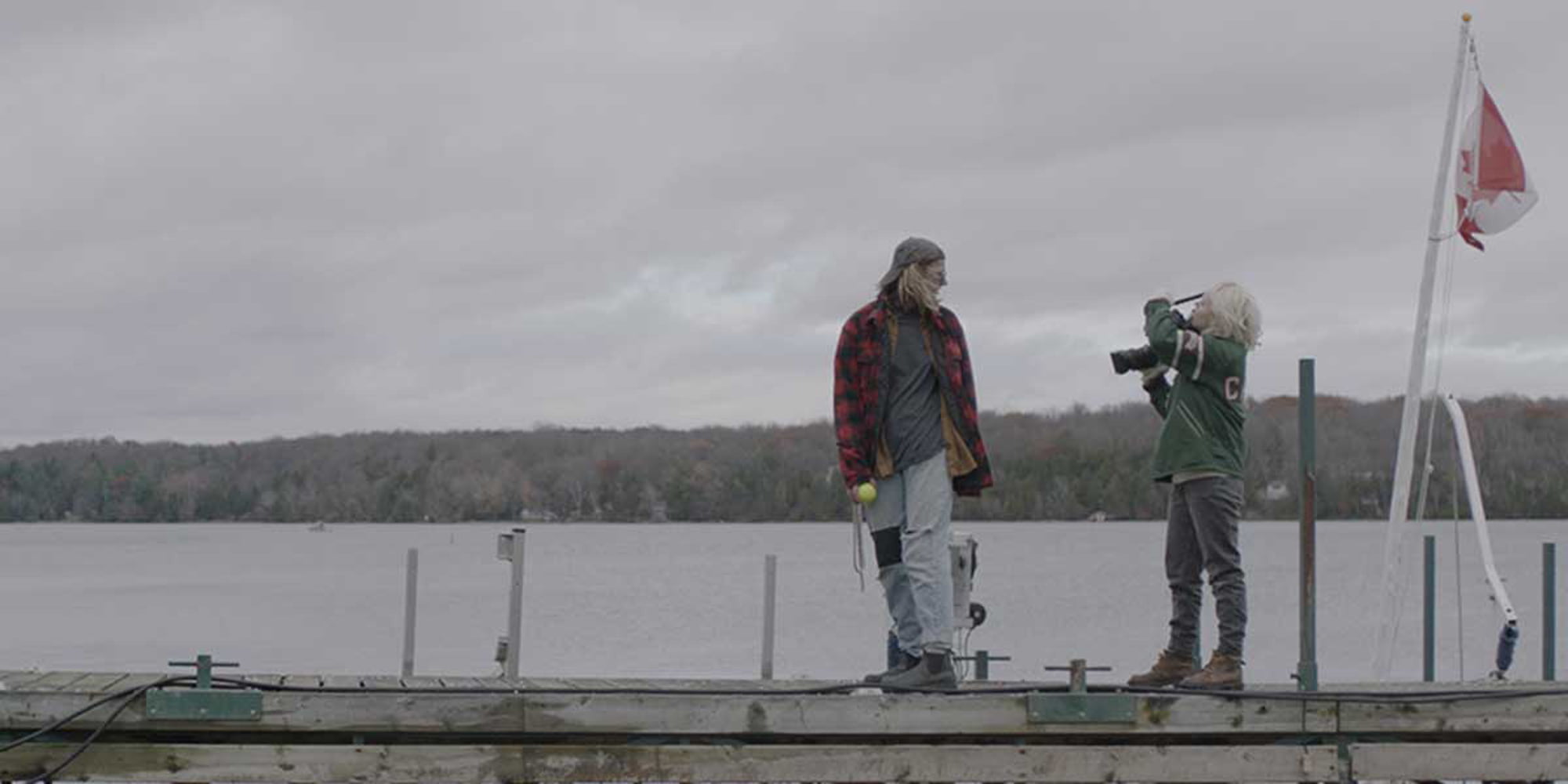 There are few experiences at this year’s Toronto International Film Festival that will be more transfixing, curious, and outright hilarious as Roney’s debut short Glitter’s Wild Women, which has its world premiere in TIFF’s Short Cuts programme. An ode to DIY cinema, cautionary drug fable, timely screed about women overcoming male stereotypes, and a story about strong and loving sisterly bonds, the mononymously named writer-director’s first major short film has a little bit of everything and a whole lot of mystery.

North Vancouver native and Ryerson Television Arts graduate Roney – who has worked previously as an actress and as the creator of the semi-autobiographical web series Cheap Whine – approached two of her closest friends to create a short so unique that it’s almost impossible to summarize. In Glitter’s Wild Women, award winning actress Grace Glowicki and performance artist Cotey Pope star as Hannah and Sophie, a pair of farm living Prince Edward Island siblings who live more or less in seclusion from the rest of their community. They’re hooked on glitter that they harvest from the woods around their home, smoking it and eventually gaining superhuman strength from the substance. Younger sister and exploitation movie aficionado Sophie begins filming their feats of strength, and the two decide to put on a DIY film festival of sorts to show off their wares. The two wonder if anyone from the surrounding community will show up, as their track record (particularly around young men) is less than exemplary to say the least.

By her own admission, Roney’s latest film is designed to make the audience question everything they’ve seen, never providing easy answers, but delivering impressionable characters and plenty of thoughtful laughs in the process. The twists certainly keep people guessing, and it’s almost impossible to predict where Roney and her equally committed collaborators will turn next.

We caught up with Roney in advance of the film’s premiere to ask her a few questions.

You’ve said that you made this film with your best friends. How did you approach them with this idea, and how did Grace and Cotey enhance your vision for the film?

Roney: I met those best friends in our first year at Ryerson, exactly one thousand years ago today.

I remember very vividly the day I approached them with the idea. At the time, all of them had made short films and had a lot of success in the industry, and I had just graduated (I took my sweet time). Granted, I directed a web series with them so I had some experience, but this was a different beast entirely.
I asked them to sit down, and I put on this super trippy Icelandic piano techno. Over the music, I pitched them this idea of two sisters who smoke glitter that gives them super strength. I remember our one buddy said ‘ten out of ten’, which felt reassuring.

Grace enhanced my vision from the beginning. After I saw the short film she made with her partner, Her Friend Adam, I knew I wanted to work with her. I had her in my head the entire time I was writing Hannah’s character. Cotey was a wild card because I only knew her through the internet and she had no formal acting experience. But to no one’s surprise, she pulled off an incredible performance. They both took my direction of keeping that dead pan energy and made it entirely their own. I think their friendship really enhanced the vision, as well. I had no idea they would have so much chemistry. They instantly connected and really bounced off each other’s performance. It was a really great feeling to have them understand my vision and add their own perspective to it. I think that sort of collaboration distinguishes the honest films from the partial.

In the film, Sophie and Hannah worry that no one would want to see a film documenting their special, glitter fueled powers, which I think is a pretty apt metaphor for how many creative people feel from time to time. By that same token, your film has an anarchic sensibility to it that suggests it doesn’t matter who sees someone’s work as long as it’s true to the spirit of the people making it. How much of yourself and your own feelings about art did you put into these characters?

Roney: I think their transition from thinking “nobody would care” to “who cares if nobody cares?” reflected a lot of how I felt after university. For a minute, I was really stressed over what I put out there. Like if it wasn’t the most quality work, it wasn’t worth it. I sort of forgot the reason I went into film to begin with. And then I stopped caring, and I asked my friends if they could help me shoot a web series, and it felt really good. I was always laughing. That series became quality because I put my passion in front of my fear. I think that’s exactly how our sisters in Glitter’s feel. Except they didn’t have the fear to begin with, it was more a logical conclusion to do the things they loved.

It feels great for my team and I to be recognized for Glitter’s, but it’s nothing compared to how great it felt when we started recognizing ourselves.

There are some truly gut-busting moments of deadpan humour in your film, which is a hard thing to achieve while making a short film because a lot of that kind of comedy depends on precise timing. How long did it take you to assemble the film – both during shooting and in editing – to a point where you knew the jokes would be funniest?

Roney: We had a lot of editing sessions before Dan (Haack, editor) and I felt like the jokes were at their funniest; especially the scenes involving VFX. We wanted the physical comedy to be just as funny as the dialogue, and concluded that abrupt cutting AND sitting in a scene worked for different VFX shots.

Dan is an actual editing wizard. After you write jokes and hear someone say them one trillion times, you really don’t know if they’re funny anymore. Dan’s editing skills made the jokes new and overall better for me, and I’m still laughing.

I also have to give a huge shout out to our delivery boy, Max (Jordinson). It was his first role, and he showed up totally prepared. He didn’t have an audition, or a rehearsal. I just told him he was going to be my delivery boy and he agreed. I think we allocated like four hours to his scene and we ended it in under two because we were so happy with all of his takes.

The story takes some fairly unforeseen twists that are too great to spoil, and I have a feeling that many people who see the film are going to create theories around what could have happened and why these women are the way they are. Without giving anything away, did you have a firm sense of their identities, powers, and motivations or were you hoping that the audience could add to the experience by coming up with their own ideas after the film has ended?

Roney: I do have a very firm sense of their identities, powers, and motivations. I wrote a short story about the sisters before writing the script. In the story, I detail their relationship with the glitter and the land and how they ended up in their position. However, I have a few different theories as to why the story ends the way it does. I think that’s why I’m so jacked up to write the feature.

I wanted the audience to have more questions than answers. Some say that’s a cop out for a director, but I don’t care. What’s important is to register the feeling you get when you watch the film, the details come later. When a film doesn’t explain everything, I think it’s giving credit to the audience. If the audience can walk out of a film with a firm understanding of how they felt but still have a lot of questions about what they just saw, I think the film has done its job.

True to the title, your film does feature some sequences involving glitter. Next to dogs and children, glitter is probably one of the hardest things to work with. Any regrets?

Roney: Absolutely not. One of the owners of the property, Mary Lou, sat in her rocking chair for like an hour just throwing glitter into her fireplace and laughing as it blazed up in this incredible, blue, magic fire. If I was on the glitter, I would’ve assumed she was a witch.