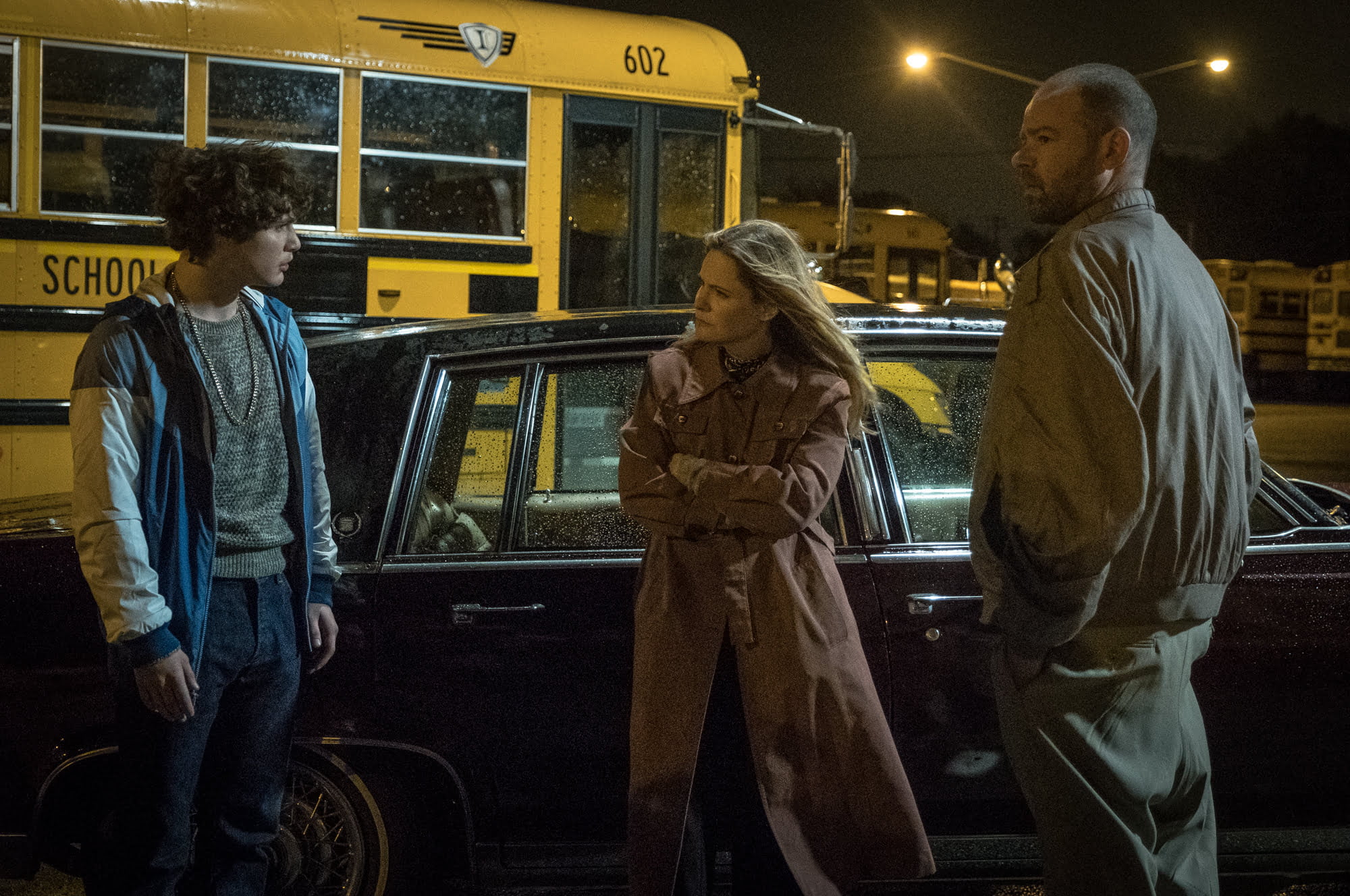 The 1980s set gangster flick White Boy Rick gets off to a fast paced, but rocky start before eventually settling into a predictable, but more assured groove. The second feature from filmmaker Yann Demange (whose ’71 remains one of the most underrated debuts of recent memory) has plenty of style and swagger to go around. What it lacks is substance and character, but thanks to an admittedly intriguing true story basis and well crafted leading performances, White Boy Rick nearly amounts to something more than the sum of its tired parts.

White Boy Rick kicks off in Detroit circa 1984. Fourteen year old Rick Wershe Jr. (newcomer Richie Merritt) and his family eke out a marginalized and overcrowded existence. His daddy, Richard Sr. (Matthew McConaughey), is a slick talking two-bit hustler who makes a living buying up cheap guns and modifying them for the city’s thriving street gangs. His adoring sister, Dawn (Bel Powley), is a cracked out trainwreck that floats in and out of their lives. They live with their perpetually consternated grandparents (Bruce Dern and Piper Laurie, both of whom are welcome sights, but neither of whom do anything), and prospects for Ricky’s future are slim at best. Wanting to make some extra cash so they could live more comfortable lives, Ricky makes inroads with some local drug dealers to sell some product. It almost immediately goes off the rails, and Ricky is approached by a pair of FBI agents (Jennifer Jason Leigh, Rory Cochrane) and a local undercover detective (Bran Tyree Henry) to start buying more weight, making bigger deals, and eventually turning into a government snitch, which we all know from previous drug trade dramas is a plan that rarely ends well for the informant.

Demange gets White Boy Rick off to such a blisteringly rushed start that one wonders how the running time could stretch towards the two hour mark. Demange introduces the key players with flourish and bravado, plunging the viewer headlong into Ricky’s chaotic and dysfunctional home life. Not much is learned about them other than their temperaments and vices, and any real attempts at crafting depth won’t appear until nearly the halfway mark. The first half of White Boy Rick comes across like a story that could suddenly end from out of nowhere at any moment. I’m sure the idea of such an approach is meant to feel immersive and kinetic, but here Demange can’t contain the dramatic intensity of his characters. White Boy Rick opens with something akin to an hour long shouting match between well cast actors putting in good work, but not showing the audience much of anything in return for their efforts.

In these early moments, White Boy Rick finds strength in its leading man and Demange’s exceptional sense of style. Demange brings the same amount of grit and artfulness to the decaying streets of Detroit that he did to Belfast in his debut. Filled with ominous shadows, pitch black nights, and gunmetal gray skies, Demange’s latest boasts a remarkable sense of space and time, even if some of the period elements are curiously anachronistic. Demange is a heck of a director, and he’s doing everything he can to make sure that White Boy Rick moves with considerable momentum and darkly humorous menace. It’s so well directed that I’m not sure just quite where the blame lies for White Boy Rick’s underwhelming feeling. Blame could easily fall to Demange wanting to cover a lot of narrative ground in a minimal amount of time, the script from Andy Weiss and twin brothers Logan and Noah Miller might have been underdeveloped, or the film’s curiously truncated subplots (especially those involving Rick’s black partners in crime) could be hinting at a project that was cut down considerably from a longer running time in the editing room. There’s a lot of fault to be found in White Boy Rick, but little to be assigned towards Demange’s continually impressive technical acumen. 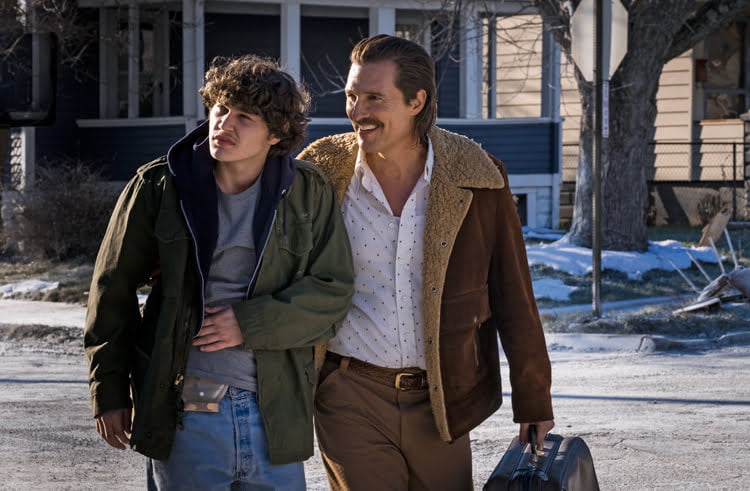 One that that’s entirely faultless is Merritt’s leading performance. Capable of holding his own and besting everyone else in a cast stacked with more seasoned performers, Merritt finds a nice equilibrium between Wershe’s bravado and the character’s inability to see that he’s being used. Ricky is a hard character to feel complete and total sympathy for, but Merritt finds subtle ways of enhancing his character’s arc from frustrated teenager to government stooge to a full-fledged dope boy. He’s always boyish, but not always charming, and Merritt has great instincts when it comes to showing the cracks in his character’s multi-layered psychological armour. Merritt keeps White Boy Rick consistently watchable, and his scenes opposite McConaughey’s restrained turn as Ricky’s loser father and Powley’s perpetually high and concerned sister offer the film plenty of welcome dramatic weight.

Just as one might be ready to write White Boy Rick off as a briskly paced misfire, Demange and company find a way to right the ship. The second half of White Boy Rick, which focuses on the titular character’s rise through the ranks of the Detroit drug trade, offers new and more interesting characters, and a desire to play with genre conventions rather than embracing them at face value. Intriguingly, White Boy Rick turns out to be a story of a street kingpin told in reverse. Ricky falls immediately and becomes a snitch before using his connections to rise to prominence. Here, the fall mostly comes before the rise, and while it’s obvious from the outset (or for anyone familiar with the real life Wershe’s case) that another plummet will be arriving, such a trajectory injects a lot of new blood and life into a movie that would have been otherwise well crafted, but barren criminal melodrama.

White Boy Rick gets stronger as it goes along, but it never slows down enough to internally process what (if anything) the material is trying to say. Merritt has a well defined character, but no one else does. Demange makes everything look great, but it’s all in service of a hollow script that should have been more captivating when one considers its true crime roots. With the exception of a few moments here and there (backseat convos between Ricky and his copper handlers, dad’s dream of opening a video store, the relationship between the main character and his girlfriend), White Boy Rick’s charms and thrills are all surface level, and almost all of it is glossed over so quickly that the film is onto the next underdeveloped scene. It’s not great, but there’s greatness in it that’s trying and ultimately failing to get out.

Check out the trailer for White Boy Rick:

This film was screened at the 2018 Toronto International Film Festival.