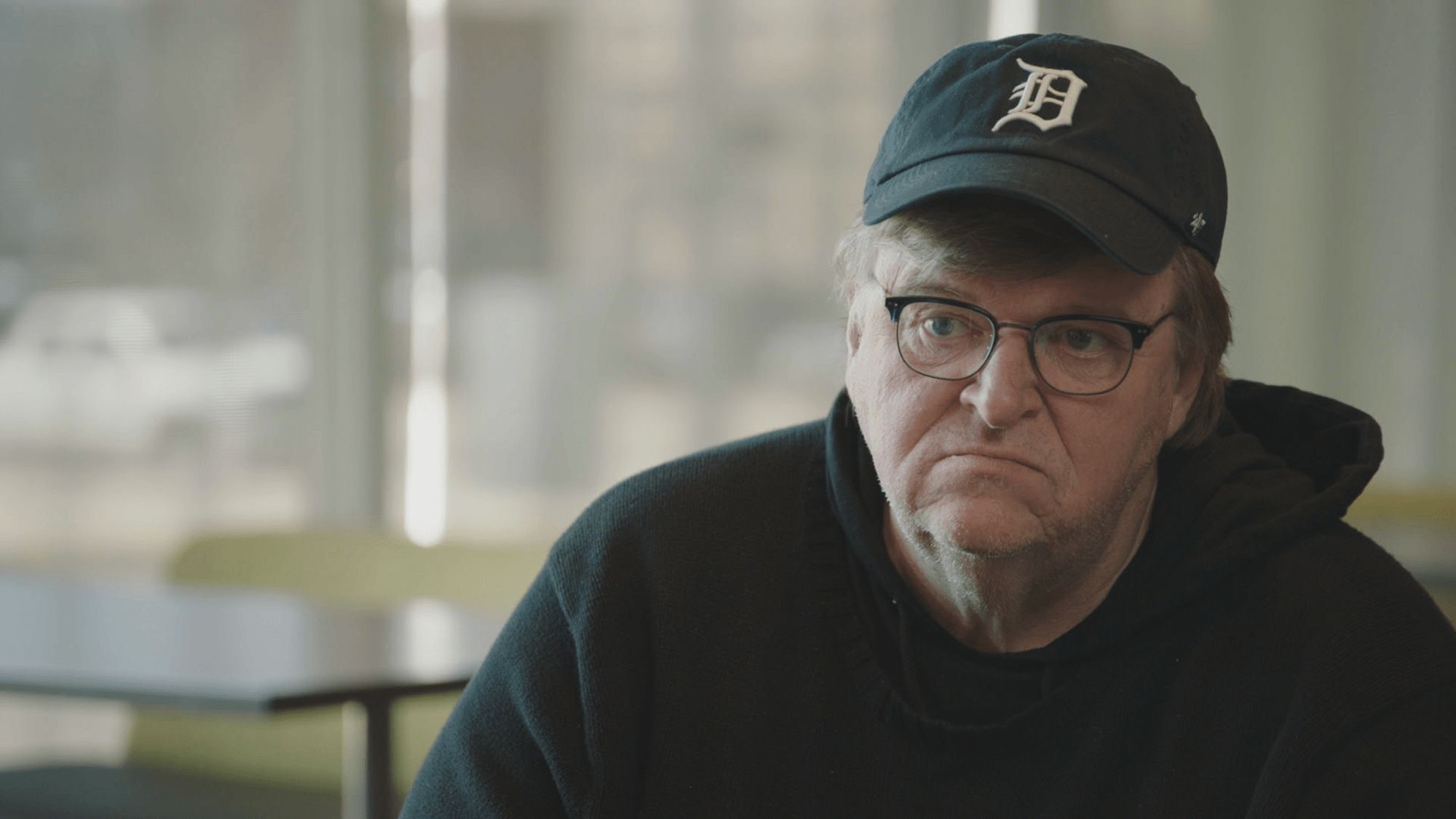 Fahrenheit 11/9, the latest long-form polemic from documentarian and pundit Michael Moore, definitely earns its sequel insinuating title, but not in ways that most viewers will be expecting. It was perhaps inevitable that Moore would mine the current state of the American political divide for his particular brand of impassioned filmmaking, but after a thunderously dreadful and unnecessary opening, Fahrenheit 11/9 becomes something worthwhile, purposeful, and poignant. It’s a mixed bag, combining newfound layers of Moore’s sometimes purposefully abrasive, smart-assed personality with some of the Michigander’s worst impulses, but it’s all in service of a personal work that’s delivered with the conviction of someone who might be making their last film.

The title of Fahrenheit 11/9 – an inverse of his previous George W. Bush baiting doc-buster Fahrenheit 9/11 – refers to the dawning President Donald Trump’s reign in America’s highest elected office. The hope and promise that Hillary Clinton would somehow best the financially suspect real estate baron and reality television host never came to fruition. The Obama years were dead and gone, and the country moved as far as humanly possible to the right; not because Trump won the popular vote, but because of the mechanics of the antiquated Electoral College, a relic from the 1800s that was put in place to appease slave states. Moore was one of the few people who could sense that Hillary’s sure-fire victory wasn’t a done deal, frequently positing that the people who lived in his own state could likely be swayed by Trump’s “America First” promises. Moore’s greatest premonitions became the new reality.

The first thirty minutes of Fahrenheit 11/9 documents Trump’s march to the White House and the mentality that has created such a toxic political environment, and the results are some of Moore’s driest and leaden work to date. Offering nothing that Moore’s already converted fan base wouldn’t already know, the opening sequences of Fahrenheit 11/9 have all the power and passion of a Powerpoint presentation delivered by someone in the throes of a deep depression. There are no new revelations, no interviews, and none of Moore’s prankish sense of humour. It’s a monotonous lecture that won’t surprise or enlighten anyone on either side of the political aisle who watched even five to ten minutes of any news broadcast over the past couple of years.

But gradually, Fahrenheit 11/9 takes a turn for the personal, and Moore’s film transforms into something akin to a career retrospective. While the title suggests that his latest effort is a direct sequel to his biggest critical and commercial success, Fahrenheit 11/9 becomes a sequel to several of Moore’s efforts at the same time, with the filmmaker drawing parallels between current affairs and issues that he’s tried to raise in several previous films. The results are messy, unfocused, and not always directly about President Trump, but Moore deserves to be commended for his attempts to show himself as both part of the solution and as part of the problem. It’s admirable, but there are also a lot of things that Moore is purposefully tap dancing around.

Moore laments that his health care exposé Sicko had a premiere and after-party that was thrown by wealthy Trump aide Jared Kushner, and the home video release of the film was handled by a company owned by Steve Bannon. Moore neglects to mention that the film was also distributed by Harvey Weinstein’s company (which inarguably had more sway over the film than Kushner or Bannon), but that’s probably off topic for the kinds of ills the filmmaker wants to address. He also looks back on a talk show appearance where he was booked to share air time with Trump. Moore was asked to play nice or the embattled, arrogant billionaire would walk off the show, which the filmmaker reluctantly agreed to for the sake of the show’s host. That host was Roseanne Barr, whose current role as an ardent Trump supporter never gets brought up. Moore is admitting his own links to some of Trump’s cronies, and while he genuinely feels bad about such dealings, he’s also displaying a purposefully selective memory for someone who likes to “stand up for the little guy.”

After his initial set-up, Moore bounces around his shakily assembled film feeling like a man without a country. He could never align himself with the MAGA crowd, but he has a deep understanding as to how such sentiments could infect America’s open economic and social wounds. By that same token, he takes the Democrats to task for selling out hopes for further change in favour of political centrism that’s based almost entirely in economics and self interest. No one escapes Moore’s righteous wrath here, and all are rightfully to blame, but thankfully Moore never makes the insistence that compromise is the best way to turn America around again. In a time when people are constantly told to not talk about politics, Moore mounts a pair of examples that show the fallacy of such centrist viewpoints.

Moore spends a considerable amount of time in his hometown of Flint, Michigan, which hasn’t had potable drinking water for several years now, thanks to Republican governor Rick Snyder’s desire to switch the city over from clean and safe Great Lakes water to a privatized line from an obviously polluted river. Flint residents – who already live in one of the most impoverished cities in the U.S. – have the highest water bills in the country and no actual water to show for it. Disease and malnourishment are rampant, and Snyder’s government has done little to help (although, neither did President Obama, who in the film’s most shocking moment slaps basically every resident of the city in the face). It feels like a tactic designed to turn Flint into a ghost town; one where the people pulling the strings don’t care if people move out or die as long as everyone eventually leaves. 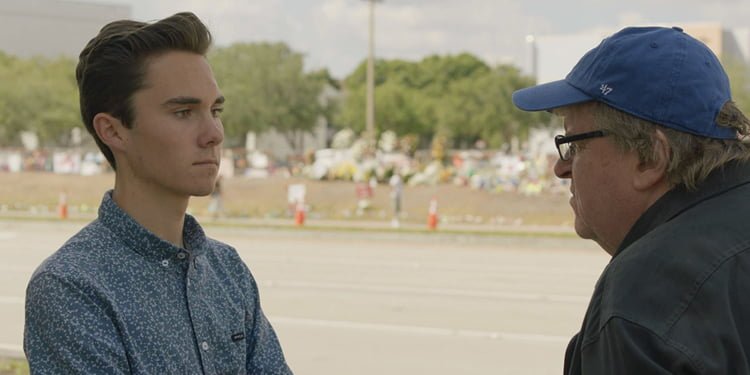 The moments spent with frustrated Flint residents hearkens back to Moore’s work on Roger & Me, the director’s first major work. That film was also set in Flint, albeit against the backdrop of the declining American automotive sector. It’s astounding to see how much and how little has changed since 1989, and the parallels between Roger & Me and Fahrenheit 11/9 are as heart-wrenching as they are unavoidable. The film’s other major fruit bearing thread also offers connections to another major milestone for Moore: 2002’s gun control screed Bowling for Columbine.

Moore spends a great deal of time with the survivors of the Parkland, Florida high school shooting, and the tireless efforts of a handful of students who want to prevent such tragedies from ever happening again. An entire movie could be made about these brave young people, and it’s almost a shame that Moore didn’t fully invest in such a project because the time spent with the Parkland survivors are the best moments in Fahrenheit 11/9. Watching these teenagers continue their advocacy efforts – undeterred by loudmouth conspiracy theorists or people who believe the Second Amendment gives them the right to own any guns they want to – is nothing short of inspiring and hopeful. Their story is one birthed from tragedy, but also one of the only a handful of hopeful beats contained within Fahrenheit 11/9.

Heading into his conclusion, Moore makes the bold choice of comparing Trump to Hitler, which I’m sure will set off plenty of bells and whistles from those who get triggered by such sweeping statements, but his arguments here for such baiting are more reasoned and nuanced than the majority of the film built around it. Fahrenheit 11/9 is all over the place, but that general sense of fear Moore displays for the future gives an otherwise boilerplate effort a true sense of emotion. Moore genuinely believes that America has elected a despot, and that Trump will likely be the final American president. Fahrenheit 11/9 could be the last film Moore ever produces.

The filmmaker’s normally jocular tone has been largely abandoned in favour of something more solemn and cautionary. The only time Moore mounts one of his trademark political stunts is to deliver a tanker truck of Flint’s water to Snyder’s house. That’s as cutesy as Fahrenheit 11/9 generally gets. The rest of Moore’s latest is driven by pure, undiluted fear for the future. While there’s a suggestion made that the next generation could hopefully save America from its own worst impulses and that constant protesting and resistance can make a difference, Moore remains as gloomy as he did when he penned an essay before the last presidential election as to why Trump would win. Never before has a documentary filmmaker made a film like this. Normally, such a called shot would be an “I told you so moment.” Not for Moore. He’s ashamed that he was right, and while he’s clearly having trouble working out some of those conflicted feelings towards himself and to the country around him, Fahrenheit 11/9 has the pronounced feeling of a final film; a tombstone epitaph for both the director’s career and the country he once knew.

Check out the trailer for Fahrenheit 11/9:

This film was screened at the 2018 Toronto International Film Festival.