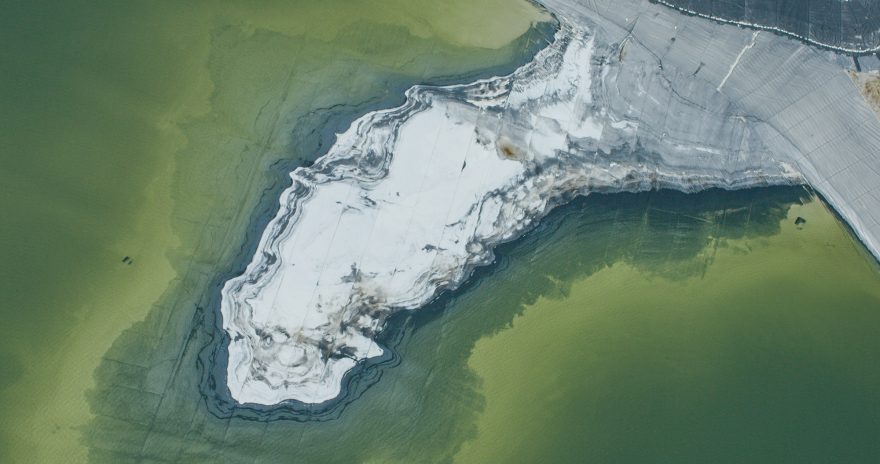 Canadian documentarians Jennifer Baichwal, Nicholas de Pencier, and Edward Burtynsky continue their examinations into the various ways mankind has irreparably damaged the environment with Anthropocne: The Human Epoch, a nod to a new and current scientific era where man has had more impact on their environment than the world’s natural state has had on human beings. Their films together only grow more timely the further the world inches towards environmental, economic, and social collapse, and their stunning visuals should be all the proof those turning a blind eye towards earth’s decay should need to realize something’s incredibly wrong. The main question I have about Anthropocene: The Human Epoch is whether or not their efforts as filmmakers, editors, and photographers are enough anymore.

Much like 2006’s Manufactured Landscapes and 2013’s Watermark before it, Anthropocene: The Human Epoch (narrated by Alicia Vikander) finds the trio travelling the globe to look at environmentally suspect and unsustainable practices, and the impact such behaviours have on the natural and living world. It’s assuredly a continuation of the team’s previously established work featuring gorgeously filmed rot, decay, and a small handful of examples where select humans are trying to undo a lot of the longstanding and “commercially acceptable” wrongs being documented. As always, the images they capture are stunning and damning in equal measure.

They go to a remote, industrial Russian village that celebrates “Metallurgy Day” and is one of the most polluted places on Earth. Shots of pools of lithium being farmed for battery production and Floridian phosphate mines are appropriately icky and bleak to behold. The filmmakers are on the ground in Immerath, Germany, site of the country’s largest open pit mine, one that continues to grow and forces area residents out of their homes to keep consuming the earth beneath them. There’s a Canadian component during a trip to British Columbia, where only ten percent of all old growth trees still exist. 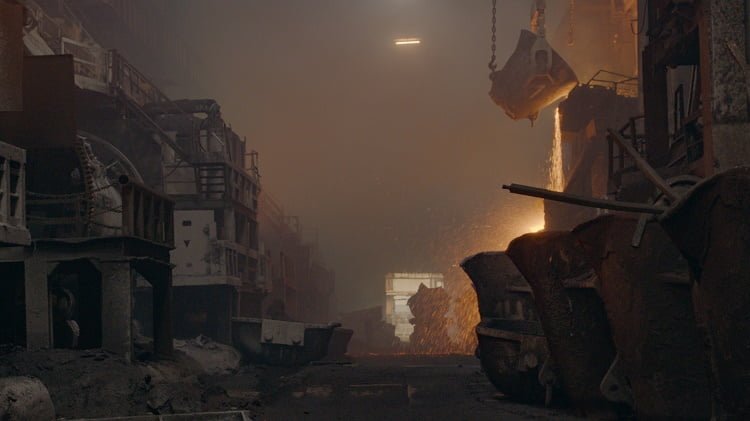 Any one of the many examples and images trotted out throughout Anthropocene: The Human Epoch could speak a thousand words on how humanity might have unwittingly already entered the next major extinction level event without knowing it, but one decidedly stands out the most and serves as the lynchpin for Baichwal, de Pencier, and Burtynsky’s thesis. While some scientists bullheadedly challenge the notion that human history has left the Holocene and entered the Anthropocene (its designation referring to the first time in recorded history that man has had more influence over the environment than the environment has had over man), rocks – the one material on Earth that has historically told us everything we need to know about geological eras – are now forming with man-made plastics as part of their construction. Plastics, which weren’t around before the 20th century, have literally become a part of our Earth’s constructive bedrock, and that’s a chilling and harrowing thought when taken in scientific context.

While some of their examples here have been chronicled better and in more depth in other recent feature documentaries (the ivory trade, the sinking of Venice), Anthropocene: The Human Epoch displays renewed vigor and passion for conveying messages about our imminent ecological collapse. It’s on par with previous works from Baichwal, de Pencier, and Burtynsky in terms of technical acumen and pointed commentary, but their films only grow more cautionary and frightening the longer the world turns a blind eye towards all the ways that humans place convenience and consumerism above maintaining healthy natural balances.

Anthropocene: The Human Epoch ultimately isn’t anything new for this filmmaking team, but they’re certainly passionate about the cause at hand. The film comes out alongside a gallery component that will tour museums (currently at the Art Gallery of Ontario and National Gallery of Canada before heading overseas), virtual and augmented reality components, and an extensive educational program. That’s not entirely unlike their previous documentaries on the subject, and the approach is admirable. The only problem is that the approach has retained the same politely artful statements for the past decade. Anthropocene: The Human Epoch is exceptional work, but I fear, perhaps cynically, that all its restrained and artful efforts won’t be enough to shake people from their complacency and dependence on unsustainable and destructive living. I hope they prove me wrong, but after three nearly identically minded films, I have my doubts.

Anthropocene: The Human Epoch opens at Cineplex Varsity and VIP Cinemas and TIFF Bell Lightbox in Toronto on Friday, September 28, 2018. Filmmakers Jennifer Baichwal, Nicholas de Pencier, and Edward Burtynsky will be on hand for Q&As following the 7:00 pm performance of the film on Friday the 28th and the 3:00 pm performance on Sunday the 30th at TIFF Bell Lightbox. The film opens in Vancouver and Ottawa on October 5, in Montreal on October 19, and it expands to additional Canadian cities throughout the fall.

Check out the trailer for Anthropocene: The Human Epoch: