Visually bracing and psychologically fascinating in equal measure, Free Solo, Jimmy Chin and Chai Vasarhelyi’s documentary look at risk-taking rock climber Alex Honnold, balances visceral thrills with an in-depth character study of a patently unclassifiable and exceptional human being. Taking a look at the dedication and mental fortitude (or some might say instability) that it takes to perform some of the most dangerous climbs in the sporting world, Free Solo will enthrall and educate even those who previously never gave thought to ascending to some of the natural world’s most terrifying cliff faces. It goes without saying that people who hate heights should consider this a massive warning, but they’d also be missing out on one of the most gorgeous and multi-layered documentaries of the year.

Alex Honnold has made a name for himself as an accomplished rock climber in a more traditional sense, but he’s best known within that particular community for performing incredible feats of athleticism, strength, and focus by attempting ascents that less than 1% of the pastimes’ enthusiasts would ever dare to consider. Free soloing is the art of scaling cliffs and rock formations without the help of a fellow climber for safety, no harness, no helmet, and fingertips and tenuous, naturally occuring toe holds as the only means of ascending. Honnold has successfully completed over 1,000 free solo climbs around the world, which is no small feat when one considers that many similarly fearless climbers have fallen to their deaths over the years.

Free Solo joins up with Honnold at a crossroads in his life. He’s not slowing down, but for the first time in a quite a while, he has a steady partner who cares deeply for his well being. He’s also starting to suffer injuries, something that previously never plagued his climbing career. Amid all of these physical and social changes, Honnold is gearing up for his most ambitious free solo climb to date: a 3,200 foot trek up the granite face of El Capitan in Yosemite National Park. Although Honnold has climbed El Capitan dozens of times in the past with the help of harnesses, no one has ever been determined enough to attempt a free solo up such a precipitous (practically vertical) rock face.

Vasarhelyi (who’s married to a climber) and Chin (a climber and photographer who’s close friends with Honnold) previously collaborated on the stunning mountain climbing documentary Meru. While their previous collaboration had its fair share of danger and physically demanding feats set in the Himalayas, that film almost pales in comparison to the sheer jaw dropping nature of Free Solo. With Honnold’s concentration so important to the successful completion of such dangerous climbs, Chin and Vasarhelyi have to remain carefully unobtrusive while still getting their shots. While Honnold frequently works with camerapeople who will climb somewhere in his general viscinity (with the aid of harnesses, for reasons that should seem obvious), this attempt requires all distractions to be taken away. As the film builds towards Honnold’s big climb, Vasarhelyi and Chin find ways of capturing the enormity of the task at hand and the solitary nature of Alex’s endeavours. He looks like an insect hanging off the side of a mountain with enormous forests and rocks waiting below, eager to rip the climber into shreds on the way down should he waver or hesitate. 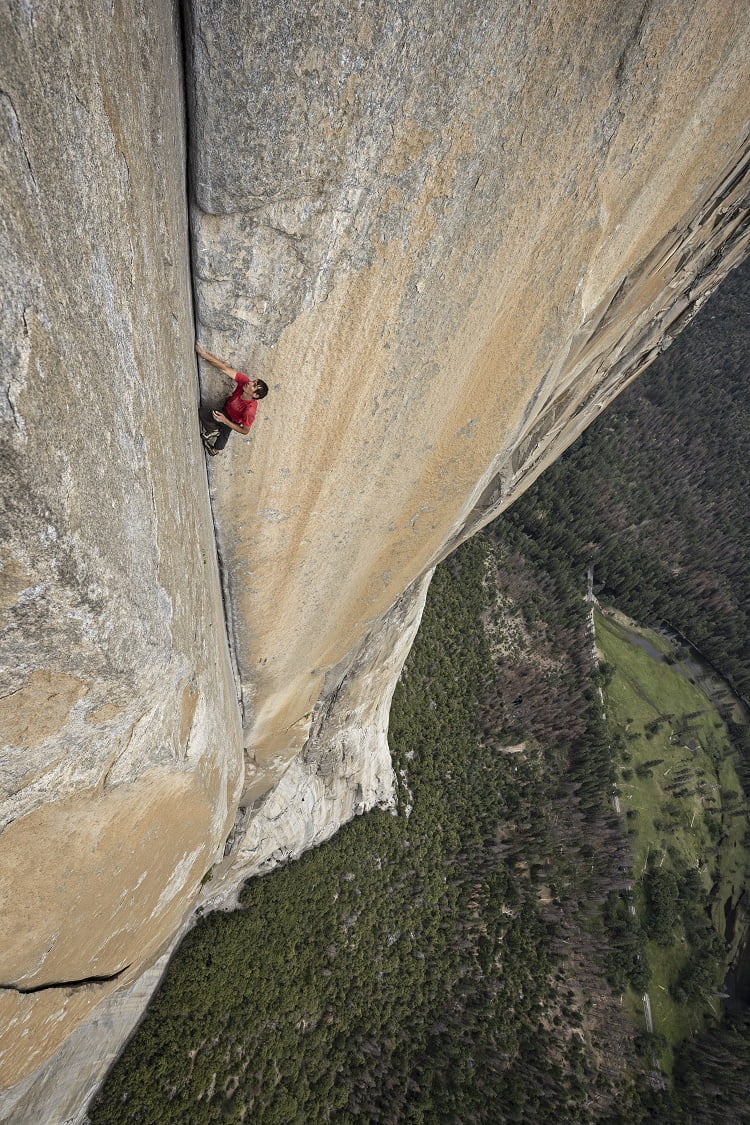 It’s breathtaking and heartstopping work that demands to be viewed on the largest screen imaginable. Watching Free Solo at home could never do Honnold’s work or the film’s cinematography justice. Come to think of it, watching it on a regular movie screen can only convey so much. If you’re lucky enough to be in an area where Free Solo can be viewed in a large format auditorium, go see it there immediately. It contains some moments of such spectacular fear that it makes similarly high up, but staged scenes in Mission: Impossible – Ghost Protocol and The Walk seem downright pedestrian in comparison. If ever there was a documentary worthy of premium ticket pricing, it’s Free Solo.

Even if viewers already know going in that Honnold survives the film’s events to live another day, Free Solo holds plenty of exciting moments that viewers will cringe at or watch through their fingers. The high-risk, high-reward nature of Honnold’s chosen profession lends itself well to creating cinematic suspense, but the main appeal of Free Solo shouldn’t only be credited to its remarkable technical proficiency. Vasarhelyi and Chin spend time getting to know and understand what makes Honnold – who isn’t a particularly reflective or self-aware person – tick. Free Solo might not be able to answer exactly why Honnold does what he does, but the film shows in loving detail why these climbs are so important to him.

Honnold has his own theories as to why he boasts something most people would see as a death wish, and Chin even follows the climber as he gets his brain tested; the results of which suggest that Honnold might not process external stimuli the same way as an average human being. Honnold shrugs off his own ideas, psychological theories, and science with a smile and a chuckle, preferring not to look too deeply into his own motivations. His loving partner, Sanni McCandless, his family, and his closest friends (even those who free solo climb themselves) more seriously question in interviews why Honnold pushes himself to such extremities.

What emerges from Free Solo’s character study of a person who could care less if they seem like a complex figurehead to outsiders is a bundle of curious, but subtly telling contradictions. Honnold has made quite the name for himself as a successful climber and author of books on the subject, making, in his own words delivered to a class of young children, as much money as “a moderately successful dentist.” Despite having a steady gig that most thrill seekers would love to have, Honnold lives out of his van and donates most of his earnings to charitable causes. For his previous climbs, Honnold has had no problem sharing his plans and allowing people to film him. On the El Capitan climb – one that hasn’t previously been attempted – Honnold keeps his cards close to his chest (even from Chin, at least part of the time) because he doesn’t want to feel pressured. He shows no signs of slowing down, even as the risk of permanent injury or forced retirement starts to loom larger. Although, for the first time in his life, the thought of death is weighing heavily, especially now that he’s finally learning to love someone as much or potentially more than he loves himself.

Amid all its visual splendour, Free Solo asks a remarkably relatable question from audiences that would largely never attempt to follow Honnold’s passions. If we could all die at any moment, then what’s the harm in living every day with focus and immediacy if such things are devoted to what we love? It’s a question as big and fraught as the enormous cliffs Honnold races up like a human sized spider on a daily basis. Many will come to Free Solo for the sheer audacity of Honnold’s work and the awe-filled gasps that it inspires. What they won’t be expecting is how long Chin and Vasarhelyi’s nuanced look at human nature will stick with them after the film ends.

Free Solo opens in Toronto (at Scotiabank Theatre and Varsity Cinemas & VIP) and Montreal on Friday, October 12, 2018. It expands to Vancouver on October 19 and throughout the fall to cities across Canada.

Check out the trailer for Free Solo: