Review: The Hate U Give 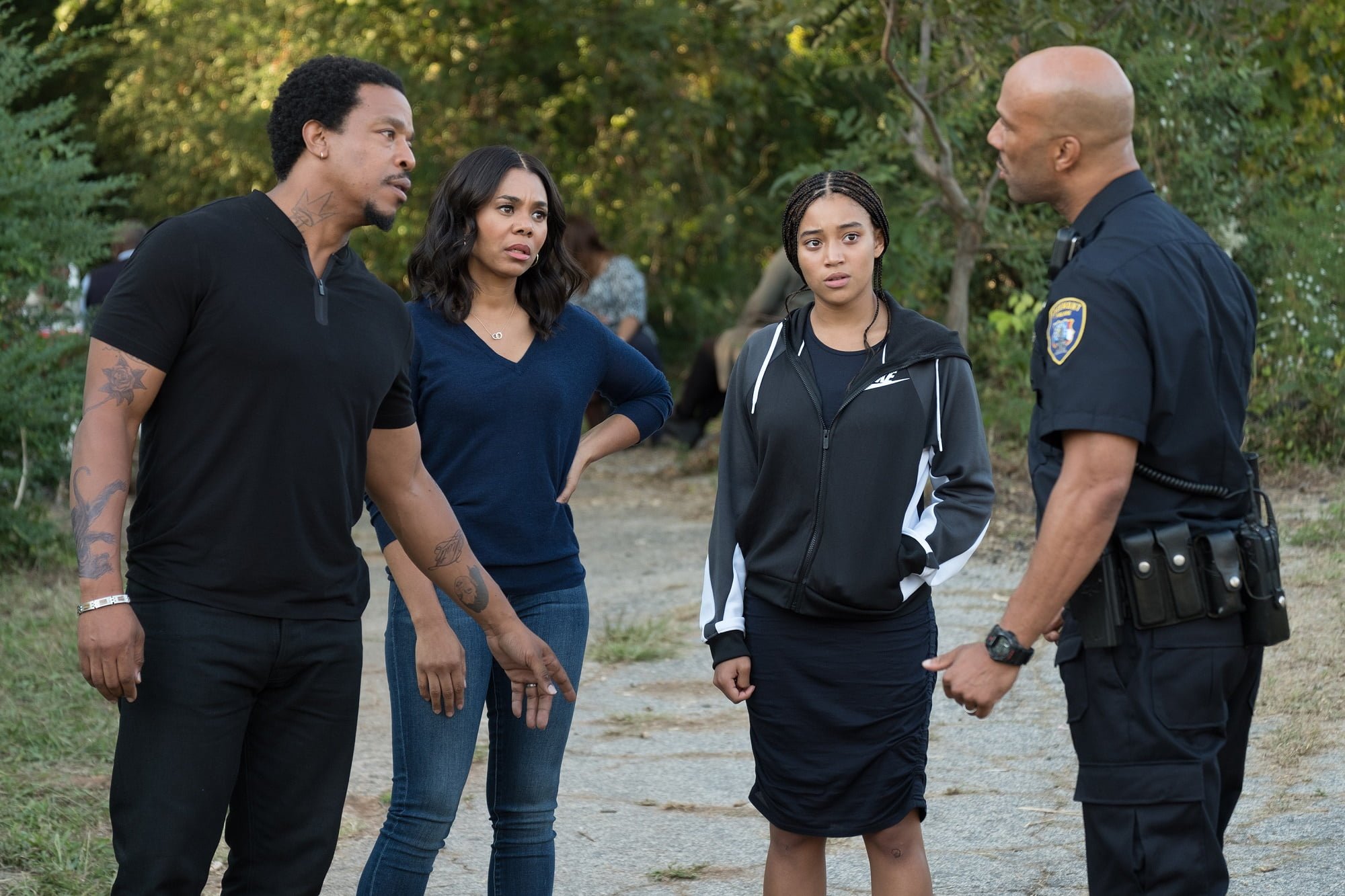 An impassioned, emotional, and vital look at a young person of colour growing up in America, George Tillman Jr.s’ The Hate U Give isn’t a perfect piece of cinematic activism or even a narratively balanced bit of storytelling, but it’s still perfect in all the ways that matter most. This adaptation of Angie Thomas’ best selling young adult novel of the same name – ported to the screen by Audrey Wells, who tragically passed away on October 4th at the age of 58 following a five year battle with cancer – should be mandatory viewing for anyone who has blinders on regarding the piss poor state of race relations around the world. It’s a piece of entertainment first and foremost, but it’s the rare sort of studio film aimed at younger audiences with the power to open eyes, minds, and hearts.

The Hate U Give doesn’t define what American city the story takes place in, but the specificity of the city isn’t important. What is important is that high school teenager Starr Carter (Amandla Stenberg) lives with her grocery store owning, reformed drug dealer father, Maverick (Russell Hornsby), hard working mother, Lisa (Regina Hall), little brother Sekani (TJ Wright), and half brother Seven (Lamar Johnson) in a predominantly black and governmentally underserved neighbourhood known as Garden Heights. They aren’t living a lavish lifestyle by any stretch, but they live comfortably for the parents to send their kids to a private school, rather than forcing them to attend the nightmarish local public one. The differences between Starr’s home life and her school life forces her to feel like she has to live in two different worlds. In Garden Heights, she’s free to be herself and engage in typical teenage inner city activities. While at school, where she also has a white boyfriend (K.J. Apa), she feels like she has to walk on eggshells around sometimes unknowingly condescending friends who emphasize her blackness without actually being black.

The gap between who Starr is at home and “Starr Version 2” gets blown open one night when she’s brought home from an out of control house party by Khalil (Algee Smith), a one time crush that she’s known since childhood. They’re pulled over by the police, Khalil is told to step out of the car, and when he briefly reaches into his car for a hairbrush, the officer shoots Khalil multiple times, killing the young black man almost instantly. As the only witness to the killing, but not wanting to be outed publically, Starr’s becomes psychologically wrecked by the aftermath of the crime. Things grown more complicated when a local gang leader and former friend of her father’s (Anthony Mackie) basically demands that the young woman refuse to testify. If she’s asked questions about Khalil’s current occupation as a drug dealer, it will come back and topple the gang for good. Caught between activists (personified by Issa Rae’s empathetic crusader), villains on both sides of the law (including her conflicted police officer uncle, played by Common), her friends, and her own personal set of morals, Starr starts to form better ideas of how to navigate her impossible situation.

The title of The Hate U Give (and its purposeful spelling) references the tattoo across the abdomen of rap legend Tupac Shakur, and there’s no better cultural figure to be looming as large over Tillman’s work. A poet and tireless advocate who thoughtfully and prolifically told stories about growing up black in impossible situations, he was also a problematic, imperfect cultural icon. Here, the Tupac surrogate is Starr’s proud and imperfect father, played brilliantly by Hornsby in one of the year’s warmest and strongest male supporting performances. In the film’s powerful opening scene, he sits down with his young children and wife and gives them a talk about what it means to be black. He sees being black as a privilege, and something to be proud of. He wants his children to always know their worth. He also knows, having lived on both sides of the law, that they need to protect themselves. If they’re stopped by a cop, they should immediately place their hands on the dashboard, and don’t move unless they’re instructed to. “Don’t give them a reason.” In a modern world where race has become weaponized, it’s a talk that sets the stage for the tragic and emotionally gutting events to follow perfectly. 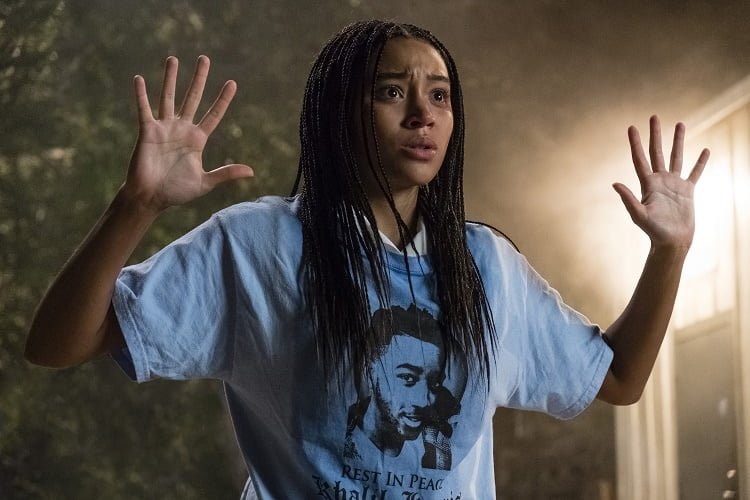 This opening talk and many others that occur throughout The Hate U Give are ones that young people in particular should pay close attention to, and Tillman’s greatest decision is to let people hear and witness these lessons through the actions and words delivered by Stenberg. Although she’s still early into what’s hopefully a long and successful career, Stenberg has become a must-watch performer, and The Hate U Give is the sort of commanding, assured, and detailed performance that creates a superstar. In an unlikely parallel to Damien Chazelle’s First Man, which is also out in theatres locally this week, Stenberg’s work is a lot like Ryan Gosling’s performance as Neil Armstrong. As Starr, Stenberg’s character already starts in a complex and richly detailed place, but she logically gains strength, knowledge, and confidence as the film progresses. The film grows along with its main character, and Stenberg has carefully calculated her performance to match Starr’s growing anger, confidence, and paranoia. It’s flat out brilliant work that establishes the young performer as a force to be reckoned with from here on out.

For his part, Tillman (Soul Food, Faster, Notorious) has made The Hate U Give into a visually compelling bit of work, something that’s not normally remarked upon when talking about young adult or social advocacy pictures. The Garden Heights neighbourhood is never looked at in a nightmarish way. It’s usually bright, sunny, and vibrant, with even the darkest storytelling tidbits happening in broad daylight or on cloudless evenings. The film’s intense final act – set against a peaceful Black Lives Matter styled rally that grows out of hand via police interFEARance – is appropriately chaotic and terrifying. But the greatest directorial gambit of all – and one of the best visual touches in any film this year – comes from Tillman’s representation of Starr’s overwhelmingly white public school. The school colour is blue, so the colour is naturally present in a lot of the sequences that unfold there, and Tillman and cinematographer Mihai Malaimare Jr. (The Master, A Walk Among the Tombstones) cover everything in a subtle blue haze. The idea that the white world is cloaked in this blue haze of protection, while the black world is a place where everything can be seen with crystal clarity, is one of the finest feats of subtle visual storytelling that I’ve ever seen. And I hopefully don’t have to tell you what that colour and its significance represents.

But for all the positives, The Hate U Give still manages more than a few problematic stumbles along the way to its powerful conclusion. The bloated 142 minute running time features a few too many detours and subplots to stay perfectly on point. The film could just as easily excise anything involving Mackie’s well performed, but threadbare heavy or Apa’s constantly perplexed, but eventually educated boyfriend character. The dialogue sometimes clunks along under the way under the weight of far too many specific pop culture references that threaten to date a work that should feel timeless. The title refers to something relatively profane, but it can only be uttered once in its entirety thanks to the Motion Picture Association of America’s puritanical approach to strong language. It’s as realistic as a PG-13 rating will allow them to get, but there’s a lot more that could have been done to make the characters and their world feel like ours. Worst of all, for a film that’s attempting to be somewhat revolutionary, there’s an alarming amount of product placement for the likes of Lyft, Coca-Cola, Nike, and Cheetos. There’s a hint that this film’s budget wouldn’t have been possible to reach without giving into a good number of corporate entities, which is entirely too depressing to think about.

But these complaints are ultimately minor ones once the bigger picture comes into focus. Overall, The Hate U Give will leave anyone who sees it shaken to their very core. It’s the type of work that sticks with the viewer and forces them to view humanity and their fellow mind in a new, hopefully more empathetic, inclusive, and respectful light. When I left the public screening of The Hate U Give that I attended at the Toronto International Film Festival earlier in the fall, I walked past an elderly black woman as I filed out of the theatre. She was shaking and crying tears of joy. The only words I heard come from her mouth were, “I have been waiting my entire life for this movie.” Much like the film itself, that’s something I am never going to forget.

Check out the trailer for The Hate U Give: