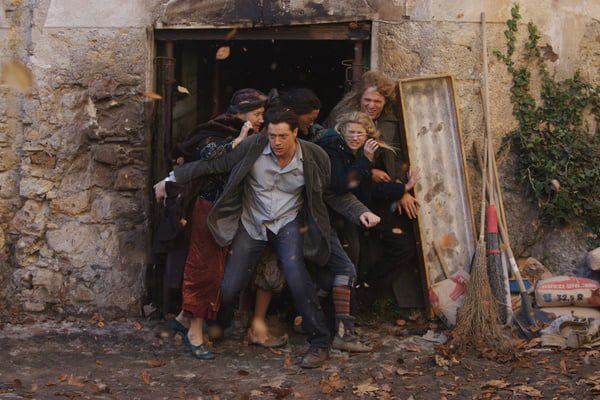 In theatres this week, a man and his daughter have to battle evil, fictional forces in Inkheart. Also opening, Underworld: Rise of the Lycans ventures back in the Underworld story, introducing a young werewolf “Romeo” and his vampire “Juliet,” and The Dark Knight returns to IMAX.

Brendan Fraser and Eliza Bennett star as Mo and Meggie, two book fanatics with a strange ability: they can bring fictional characters to life. The problem is that when a character is brought out of a book, a real person must take their place in the story, and years ago Mo lost his wife inside a book called Inkheart.

When Mo rediscovers the book again, he attempts to rescue his wife from the book, but inadvertently unleashes the villain Capricorn, played by Andy Serkis. Taking Meggie hostage, Capricorn tries to force her to release his partner the Shadow, as Mo gathers a group to fight back before it’s too late.

Directed by Iain Softley, who brought K-Pax to the screen in 2001, Inkheart is an entertaining film with a decent reputation among British critics following its debut across the pond in December.

“Filled with the prerequisites of talking animals, an appealing young heroine and some heinous villains, all the ingredients are there, although an overly complex plot makes for an altogether middling experience,” wrote David Edwards for the Daily Mirror.

Christopher Tookey of the Daily Mail was a bit less kind, however.

“Inkheart the novel is intended to be the first of a trilogy,” Tookey wrote, “but – like The Golden Compass, but even more so – it falls well short of convincing me that the next two films would be a worthwhile investment, financially or emotionally.”

Set before the first Underworld, Rise of the Lycans liberally rips off Romeo and Juliet, but with werewolves and vampires taking on the parts of the Montagues and Capulets. With just a bit more bloodshed and fangs throw in, of course.

First time director Patrick Tatopoulos, who previously did a lot of work with creature design and makeup, takes to the big chair to guide Rhona Mitra as Sonja. She has fallen in love with Lucian, played by Michael Sheen, a werewolf who has no problem fighting the arrogant vampires. His chief rival being Viktor, played once more by Bill Nighy, who will stop at nothing to break Sonja of her love of the beast.

On the bright side, the new film can finally let Underworld fans like myself put the dreadful Underworld 2 behind us. That’s if the new film is even marginally good, of course.

While I’m not holding my breath, it bodes very well for fans that Rise of the Lycans ditches the overused “abomination” plot that was used as the big story arc between the previous films. All of the actors involved should also prove entertaining, especially if you enjoyed Mitra in her last big performance in the action film Doomsday.

The Dark Knight [IMAX]
Returning to IMAX this week, fans of last year’s epic Batman film can get yet another fix, with Christian Bale as the fearless, gravel-voiced, caped crusader, facing off against Heath Ledger’s maniacal Joker.

In The Dark Knight, Bruce Wayne, and his alter ego, face the challenge of Gotham’s latest terror, the anarchist known as the Joker. The local mob bosses are essentially hiding out from the Batman, which gives the Joker the perfect chance to slip in and wreck havoc.

As almost everyone is already aware, The Dark Knight was Heath Ledger’s last performance, and we will find out this week if the Academy Awards will be honouring him with a nomination. Since it’s practically a sure thing, this is a very good opportunity to see what all the fuss is about, if you haven’t already.

Admittedly, The Dark Knight falters at points in the story, especially near the climax, but this is mostly forgivable since the story is highly entertaining, and dramatically dark.

The IMAX scenes, which are essentially all of the outdoor action sequences, also make great use of the gigantic screen, which is the best reason I can think of to see the film in an IMAX theatre.