Packed to bursting with subtext, laughs, shocks, and genuinely terrifying scares, Jordan Peele’s second feature film, Us, will satisfy casual genre fans and devotees of auteur driven cinema equally, but those in the latter category will probably spend more time piecing together what it all could mean. There’s plenty of humour, gore, and tension to appease anyone who goes into Us wanting nothing more than a fun house ride that’s guaranteed to linger in the form of nightmares, but – much like Peele’s previous effort, Get Out – there’s so much to take in that a single viewing wouldn’t do the film justice. It’s the type of film that I like very much at the moment I find myself writing this, but subsequent viewings could uncover an unassailable, stone cold classic of modern cinema.

Us follows a seemingly normal family of four – mother Adelaide (Lupita Nyong’o), father Gabe (Winston Duke), eldest daughter Zora (Shahadi Wright Joseph), and shy young son Jason (Evan Alex) – as the take a summertime holiday along the California coast. While the rest of her family is thrilled to be getting back to their grandmother’s old cottage, Adelaide is extremely apprehensive about returning to a nearby public beach where she suffered a traumatic experience as a young child. On one of their first nights there, a mysterious family appears in their driveway. These interlopers refuse to leave and begin to terrorize Adelaide and her clan. To make matters even more terrifying and unsettling, these violent beings are near exact doppelgangers for Adelaide and her family.

While there are plenty of hilariously delivered dark comedic touches and plenty of heightened atmospherics and images to keep audiences invested while Peele unfurls his story, Us is the type of film that requires a lot of patience and careful thought on the part of the viewer. While Us would be entertaining enough on its own to watch passively as popcorn entertainment, a true appreciation of the various motifs, themes, and twists will require audience members to give back a lot in service of the film. Without such engagement and a desire to read between and outside of the margins of Peele’s story, Us’ increasingly surreal and dreamlike approach might cause some to balk and write the whole thing off as being somewhat nonsensical or illogical. There will inevitably be some amount of backlash from people insisting that Us leads somewhere that doesn’t make any sense, but to that I counter that nightmares don’t need to make perfect sense. They’re frightening, stress induced reactions to long suppressed terrors.

While Get Out was a bit easier to decipher, Us is a lot slipperier and smarter in its use of visual, biblical, social, and comedic metaphors, and a lot of them have to do with the suppressing of unpleasant topics, both personal and historical. Perhaps above all other interpretations, Us strikes most successfully as a depiction of post traumatic stress, the constant state of paranoia and heightened awareness that accompanies it, and how those feelings can impact loved ones. It’s also a story about forgotten history, the loss of American civility, the primal nature of our own worst impulses, and a savage takedown of “keeping up with the Joneses” culture filtered through a carefully mounted look at race relations. It’s a lot to take in, but those personal traumas suffered by Adelaide and her family are the glue that holds Peele’s ambitious and sprawling vision together. Us is a work of honest and sometimes confrontational art, but one that never forgets its strong sense of humanity. 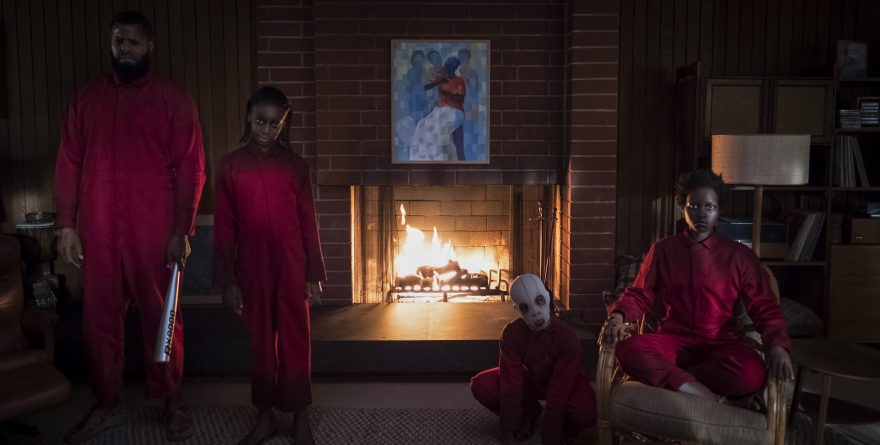 It’s also the film where Peele, although only two films into his career as a director, establishes himself as an auteur. Visually, cinematographer Mike Gioulakis (It Follows, Glass) gives Peele plenty of gorgeous material to work with, but each scene is peppered with a plethora of clever “blink and you’ll miss it” bits of production design that are constantly pointing to clues like a sinister “choose your own adventure” novel. Every shot contained within Us points towards a clearer picture that never comes into focus until around the halfway point and only sharpens as it inches closer to Peele’s gutsy conclusion. Such depth of detail and intricate execution will likely earn Us favourable comparisons to classic thrillers like The Shining or Funny Games, but Peele’s influences and genre loves are much deeper than that, with the filmmaker offering nods to everything high and low, from A Nightmare on Elm Street to C.H.U.D. to The Birds to Paradise Lost to Suspiria to 90s hip-hop videos to the 1980s phenomenon of Hands Across America. Like many great artists, Peele has an exceptional ability to find threads between everything he finds interesting, visually captivating, intellectually stimulating, or generally amusing and weave them into a cohesive and original experience. While some critics might deduct points for Us’ unabashed signposting, Peele is one of the few filmmakers I’ve seen that can make such nods and winks meaningful instead of indulgent.

The family dynamic displayed by the stars of Us also helps Peele’s vision immensely. As both everyday people fighting for their lives and their more impressively physical, primal, and almost completely sub-verbal alter egos, each cast member is given something unique to do. While Joseph and Duke are given the bulk of the film’s many frequently uproarious punchlines, Nyong’o and Alex are given most of the dramatic heavy lifting, and all of them meet together at a common middle ground that establishes a lived in and fully realized family dynamic. Similarly, Elisabeth Moss and Tim Heidecker excel in smaller supporting roles as a more affluent and vastly unhappier married couple vacationing at another nearby cottage. While Us has a lot on its mind, Peele never forsakes the intricacies of human interaction in favour of his grander vision. He’s smart enough to know that good actors can make even the most outlandish of situations seem real, and he gives his players – both young and old – plenty of room to dig deep.

But if there’s any true standout here, it’s Nyong’o, whose dual turn here is her career best to date and one that people will be talking about for years to come. As Adelaide, Nyong’o elicits a great deal of empathy as a loving family woman and protector who has both suffered and survived. As Adelaide’s murderous, golden scissor toting dark side, Red, she’s absolutely terrifying and magnetic. Whenever the two characters (if they can even be separated from one another) are facing off against one another, Nyong’o’s tandem performances are impressively seamless an uncanny. Her work also showcases a pair of performances that are subtly building towards the junction of Peele’s grand, third act reveal; one that will make viewers reexamine and question everything that came before it. It’s a delicate twist that needs an exceptional talent to pull it off (and also to coherently explain it), and it’s doubtful that anyone other than Nyong’o could’ve done it better.

Like the best horror movies, Us chillingly lingers with dread long after the credits have rolled, and like the smartest and most entertaining films, it’s something I wanted to watch again the second it ended. No matter how one chooses to read Us (as long as they manage to read it at all), Peele’s latest comes across as a near perfect and complete package. There are few works of art, cinema, and literature that offer this much food for thought and bang for one’s buck at the same time. Us is a towering achievement that eclipses even Peele’s impressive debut feature, and establishes him even further as one of the most impressive and versatile artists working today.

Check out the trailer for Us: