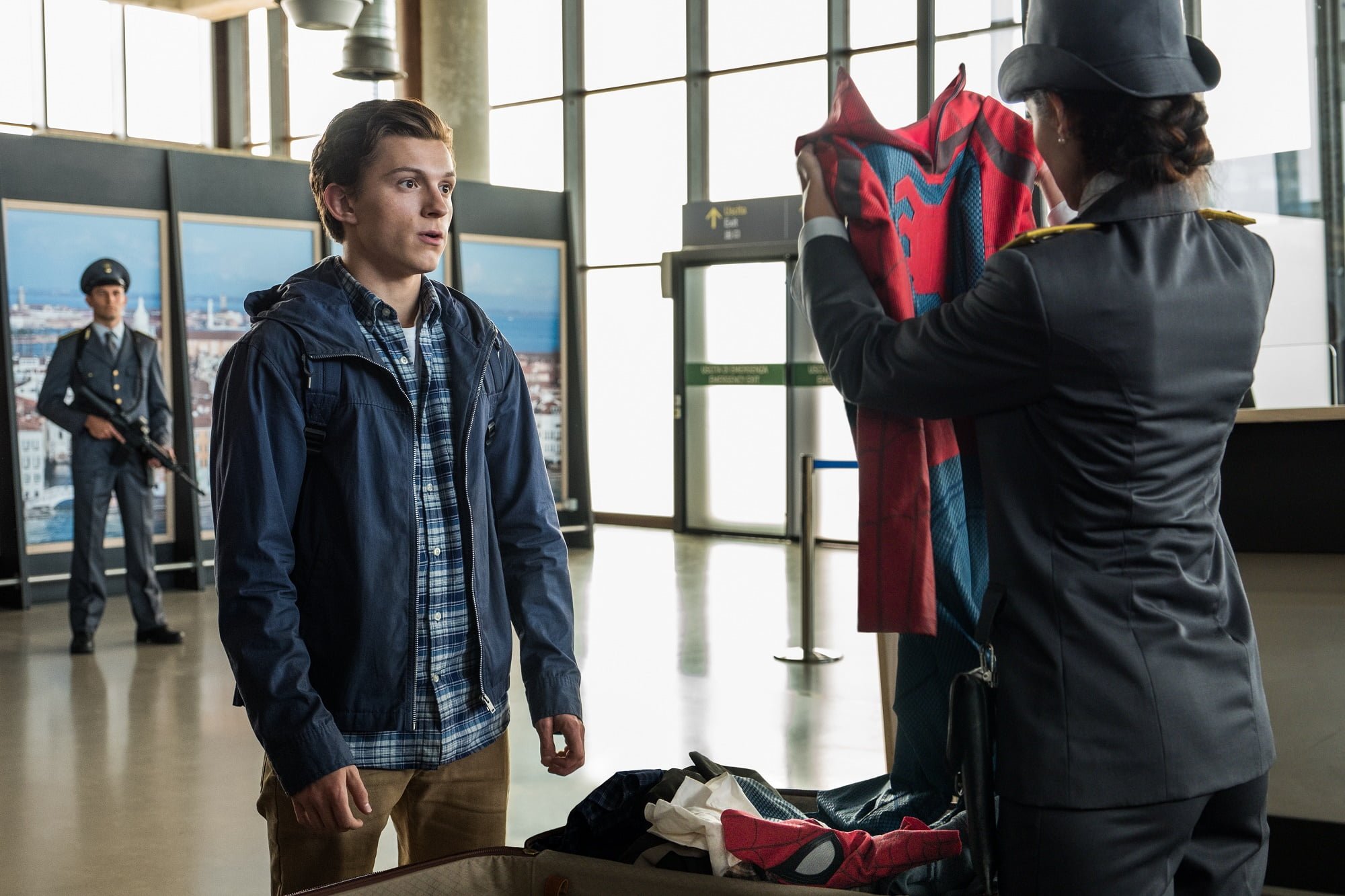 No matter if you choose to look at it either as the closing of a major chapter in the Marvel Avengers storyline or the beginning of a new era, Spider-Man: Far From Home is a superbly entertaining and well done superhero movie by any metric. On one hand, it’s a lot more lighthearted than both the saga capping Avengers: Endgame and even looser than Spider-Man: Homecoming, the Spidey reboot from a few years ago that reinvented the character for the third time in as many years. A lot closer in tone to the feel good vibes of Thor: Ragnarok and the genre bending playfulness of the recently released animated adventure, Spider-Man: Into the Spider-Verse, Far From Home is one of the better and more satisfying bits of mainstream summertime studio entertainment this year, but it also thankfully adds a lot to the growing character of Peter Parker along the way. It feels slight and entertaining on a passing glance, but what it’s actually achieving is low-key brilliant and inspired. It’s certainly more of a bridge to future installments, but it’s one heck of a bridge.

Following the death of his mentor, Tony Stark (which, if you didn’t know that happened in Avengers: Endgame, I’m sorry, but amazed that you avoided that spoiler for so long), and the return of millions of people to the universe that were snapped out of existence for several years (himself included), Peter Parker (Tom Holland), is torn between wanting to take up Iron Man’s mantle and living life as a normal teenager. While he doesn’t shirk his responsibilities as Spider-Man, Peter would much rather take some downtime and a hard earned vacation. A break from superhero stuff presents itself in the form of a science club field trip to Europe, where he hopes to tell his crush, M.J. (Zendaya), how he feels about her. He ducks repeated calls from former Avengers overseer Nick Fury (Samuel L. Jackson), who wants to bring Peter back into the fold, but once his class arrives at their first destination in Venice, the young man sees exactly why Tony’s old boss was trying to contact him. Four mythical beasts known as elementals – representing fire, earth, wind, and water – have been laying waste to cities on Earth across multiple dimensions. Nick Fury has enlisted the help of interdimensional superhero Quentin Beck (Jake Gyllenhaal, who balances humour and seriousness in his performance perfectly), a.k.a. Mysterio, to fight back, but they still could use some help from Peter since all of the other surviving superheroes are either unreachable or indisposed. Peter initially rebuffs the request for assistance, but eventually he’ll have no choice but to travel all over Europe in a bid to save the world, not just his hometown of New York City.

The tone of Spider-Man: Far From Home is decidedly more focused on comedy and elaborate, almost Chaplin-esque action sequences, most notably a fight that Peter has with a church bell in Venice or a battle against a water monster that takes place without the benefit of his super-suit. There isn’t a single scene from returning director Jon Watts and screenwriters Chris McKenna and Erik Sommers that doesn’t pass by without a visual punchline or witty one-liner, making it an easy film to enjoy as a passing bit of entertainment. Alongside Holland and Gyllenhaal, who both know when to be silly and when to be serious, the supporting cast all have increased roles and storylines of their own, with everyone doing their part to keep Spider-Man: Far From Home as engaging as possible. There isn’t a weak link in the cast, and everyone does such a fine job that listing what they bring to the table would both spoil the film and we’d be here for far too long. 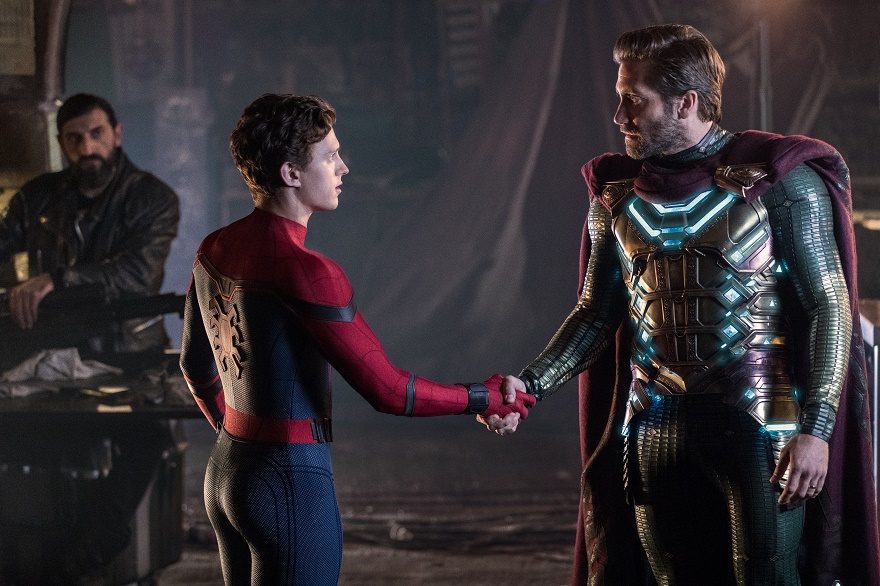 It’s a good choice to focus on the humour and large cast of characters when one considers that the plot of Spider-Man: Far From Home is never in doubt. I doubt any viewers would go into this truly believing that Peter Parker will just sit on his hands for two hours and watch the world burn down around him. Similarly, anyone with even a passing knowledge of Mysterio as a character from the comics won’t be particularly shocked by where the story will end up heading, even though the big reveal surrounding that is handled more cheekily and gleefully than most superhero movies would dare to attempt. That obviousness might’ve hampered a lesser movie, but the filmmakers all have a keen understanding of who Peter Parker is as a character and the direction they want to take him in. If the plot isn’t particularly tricky, it’s because it’s all a Trojan Horse designed to deliver a more delicate and reasoned character study in the guise of a superhero blockbuster.

As the situation at hand grows more fraught and dangerous, Watts and company allow room for Peter to express his consternation and growing impatience incrementally. Peter, like his mentor before him, is coming apart while trying to wrestle with his newfound responsibilities. Peter is still a hopelessly awkward young man, but there are flashes of the hero he could become peppered throughout Spider-Man: Far From Home, and those bursts of a more mature Parker become prominent the longer the story progresses. Spider-Man: Far From Home, much like Thor: Ragnarok, is less about the actual situation at hand and more about how the stressed out and unwilling person at the centre of it will choose to handle things. It’s  more fascinating and captivating than the actual slam-bang action beats (although those are very good, including a bonkers fight during the second half that’s a lot more like Spider-Man: Into the Spider-Verse than anything in the live action superhero realm), and it establishes a solid base for any future MCU installments going forward.

It also helps that Holland emerges from Spider-Man: Far From Home as unequivocally and definitively the best actor to play the character yet. It might not be the best Spider-Man movie, but it’s the best performance in the lead role. There’s nothing about Holland’s depiction of Spider-Man that’s “too cool for school.” He’s not too whiny and he’s not overconfident. He’s the smartest person in the room, yet completely oblivious when it comes to interacting with other human beings. Holland’s dedication to depicting Peter’s earnestness is unwavering, but as Far From Home progresses into more serious territory, so too does the layers of his performance. One gets the sense that Peter’s next appearance on screen will be a bit more serious, but he won’t be a full fledged hero by that point. Still, the build towards a full-on, serious Peter Parker is being established, and it’s an assured, long term thread for which Holland seems like a perfect fit. I can’t wait to see where the character goes next (be sure to stay through the credits because the set-ups provided here are easily the best and most tantalizing that Marvel has come up with to date), and a huge part of that anticipation is thanks to Holland.

Peter Parker has always been one of the strongest Marvel characters, and while Spider-Man: Far From Home might not be the webslinger’s best outing (with this slotting just behind Raimi’s Spider-Man 2, Into the Spider-Verse, and Watts’ Homecoming), it’s certainly the one that shows the most potential for the future. It’s the kind of film that leaves the viewer wanting more in the best possible way, maybe not for the overall future of the Marvel universe, but certainly for this one particular character. The wheels are in motion for something that could be outstanding, and Spider-Man: Far From Home will be a huge part of that if the filmmakers succeed.

Check out the trailer for Spider-Man: Far From Home: