Review: The Art of Racing in the Rain

When you’re starting out as a film critic, one of the first things taught is that it’s unfair, unwise, and pedantic to compare movies directly, but when it comes to reviewing something like the maudlin, tear-jerking, but not terrible melodrama The Art of Racing in the Rain, such connections are necessary if I want to describe how this is better than almost all of its like minded brethren.

Last week in my review of David Crosby: Remember My Name, I stated that I was burnt out on watching all of this year’s multitude of limp, indulgent, and fawning documentaries about beloved music superstars of the baby boom. This week, I’m back to beat that same drum to say that I can also go the rest of my life without another motion picture where deeply flawed humans fumble their way through life’s tragedies with the help of a loving dog. Advertised as being “from the studio that brought you Marley & Me,” The Art of Racing in the Rain is such a story told from the perspective of a wizened old pooch, but this one originates from a bestselling novel by Garth Stein, not one written by W. Bruce Cameron, the mastermind behind the recent slate of dreadfully insulting “inspirational doggo” pictures A Dog’s Purpose, A Dog’s Way Home, and A Dog’s Journey, all of which are reprehensible, and two of which came out this year alone. While The Art of Racing in the Rain lays the dramatic contrivances, manipulative narrative twists, and half-assed philosophizing on just as thick as the Cameron adaptations did, there’s no questioning that director Simon Curtis and screenwriter Mark Bomback have come up with a somewhat identical sounding story offered up in a vastly preferable, less patronizing manner.

First and foremost, the story of The Art of Racing in the Rain is a lot better realized than the Cameron adaptations, despite playing a lot of the same notes. Aging pooch Enzo (voiced by Kevin Costner) knows his days are numbered, and the film is told from his perspective as he looks back on his life and the ups and downs faced by his owner, upstart race car driver Denny Swift (Milo Ventimiglia). From the opening scene Curtis (My Week with Marilyn, Goodbye Christopher Robin) and Bomback (Unstoppable, The Wolverine, War for the Planet of the Apes) make it known that the dog will eventually die years down the road in this story, instead of always toying with the audience’s emotions and repeatedly killing and abusing animals just to wring a few extra tears from viewers’ eyes. As a reflection on human and animal mortality, the set-up and overall execution of The Art of Racing in the Rain is rather good, and despite the fact that Enzo talks a bit about reincarnation, Curtis and Bomback have the good sense to not go down similar paths blazed by the Cameron films. There are only a couple of bad things that happen to the dog in this film, and if you’ve seen the Cameron adaptations, you’ll think these hiccups are relatively quaint in comparison.

The Art of Racing in the Rain has Enzo reminiscing about the seminal events in his owner’s life and what he learned about human nature and being a good companion. Denny’s a bit past his prime as a driver – working as a racing instructor in the Seattle area (which is actually an unusual blend of good looking, but out of place Vancouver and Toronto locations, for the most part) – but he hasn’t given up hope on making an entry into the illustrious Formula One circuit. Enzo shares Denny’s love of fast cars and strategic driving, frequently talking in racing metaphors that range from lightly novel to laughably on-the-nose, but it’s vastly preferable to listening to a dumb, perpetually reincarnated dog who never learns anything prattling on about his sole mission in life (which is the entire fabric of the Cameron films). The Art of Racing in the Rain is about how people and animals live, learn, and grow, which is fine. The Cameron adapted films are about the patently terrible sides of human nature, and how owning a dog is the only way to ensure that we won’t die miserable and alone, even if that pet will likely die miserably and repeatedly. 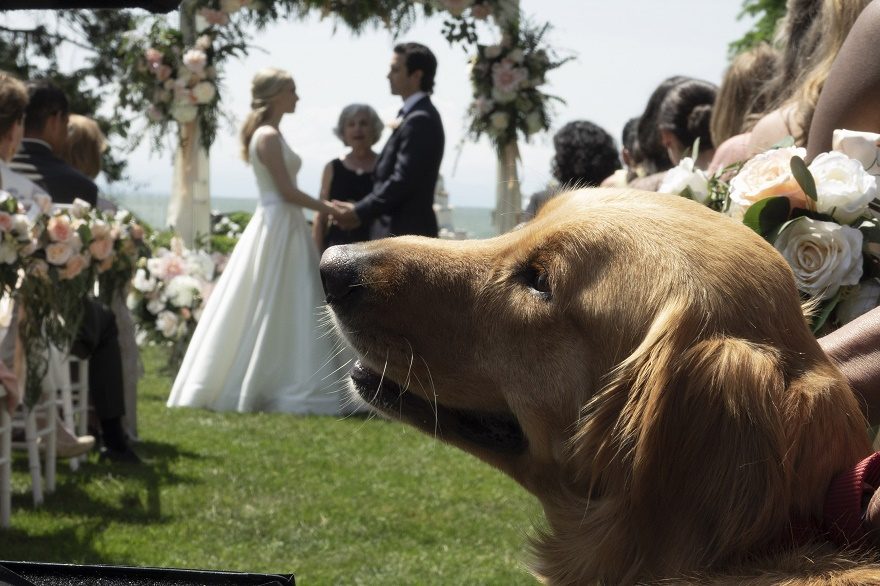 Ventimiglia might be the film’s human star, and Curtis makes good use of his leading man’s limited range, but Costner is left to do the majority of the dramatic heavy lifting here. It’s the right choice, with the actor delivering a rather lovely, playful, and sometimes appropriately gruff performance, and Curtis doing a fine job of highlighting Enzo as the true audience surrogate through a combination of nifty point-of-view shots throughout and generally decent writing that’s better than the lowly standards of this sort of genre.

Enzo is there when Denny starts to experience some success, when he meets his eventual wife (Amanda Seyfried), when he has his first and only kid, and when he experiences a major, life altering tragedy and has to contend with the unforeseen fallout. That tragedy, which arrives around the midway point, turns the second half of The Art of Racing in the Rain into a completely different, and admittedly less successful sort of melodrama, but Curtis, Costner, and Bomback have done a fine job of making the viewer want to follow along from the perspective of Enzo, who remains an invested, attentive, and casual observer of everything that’s happening in Denny’s life. If the events that happened in Denny’s career and personal life were told from the perspective of the human character, The Art of Racing in the Rain would be virtually indistinguishable from any number of other tear-jerkers that came before it, but the shift in viewpoint works better than one might expect from a dog telling the story. It’s all rather predictable, with each of the humans screwing up, the dog’s screwing up, and villains emerging (personified by Martin Donovan and Kathy Baker, as Seyfried’s disapproving high society parents), but Curtis leans heavily into the story’s gimmick without letting off the gas, delivering something that’s certainly not unique, but definitely a slight cut above the average in the well-worn process.

Curtis also knows when it’s appropriate to make jokes and when to lay off the precociousness. Unlike the Cameron adaptations, which bounce wildly back and forth between trying to keep things light and cheery before snapping viewers out of their mindless bliss with bursts of harshness or violence, Curtis and Bomback have found a way to keep the tone of their high concept pooch-pic remarkably balanced. Sure, there are cute animal hijinks, and even a few weird touches (including the unexpected use of Silverchair and Alice Cooper on the soundtrack and a bizarre, but strangely well incorporated hallucination sequence), but for the most part, the filmmakers are shying away from anything that might be deemed too ridiculous. It’s still manipulative, but at least it isn’t brazen, boldfaced, and borderline cynical. The Art of Racing in the Rain seems to genuinely care about the emotions experienced by those in the audience, and while the film is still designed to touch the tear ducts and heartstrings more than the mind, at least Curtis’ film doesn’t feel like something that holds the viewer hostage with its plot machinations. It’s as well done as these kinds of films tend to get, and more importantly, it feels honest in its intentions and aims.

The adaptations of Cameron’s novels left me filled with rage and contempt, and that hasn’t dissipated in the slightest the further I get away from them. They were shameless and soul crushing. So it pleases me to say that I never felt any of those things while watching The Art of Racing in the Rain. I rarely thought I was watching a masterpiece or even something that I can unequivocally recommend to everyone I know without reservation, but I can say that I felt some heartstrings being plucked, some sympathies forming for the characters, and sometimes I was even intellectually engaged. It’s unabashedly hokey, Hallmark-level melodrama, but if forced to pick one film from the doggie pile of such weepies, I wouldn’t hesitate in choosing this one.

The Art of Racing in the Rain opens in theatres everywhere on Friday, August 9, 2019.

Check out the trailer for The Art of Racing in the Rain: