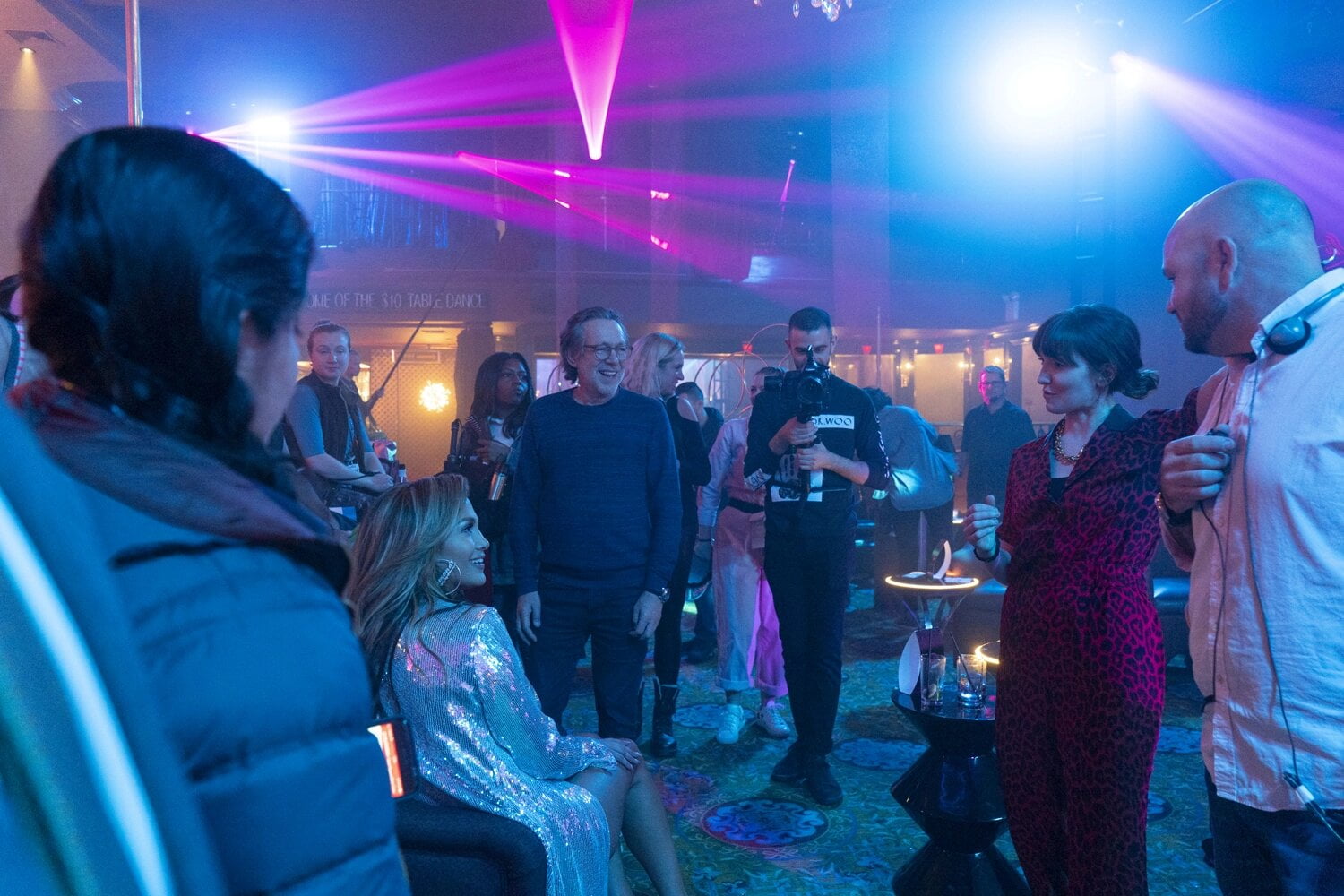 Hustlers has been one of 2019’s most talked about films, and it’s started a number of conversations that dig deeper than just the crime-driven story, but the glitz, glam, and attitude sure don’t hurt either.

Featuring an incredible cast, starring Jennifer Lopez and Constance Wu, the film has a lot of subtext that’s not just fascinating; it’s also long overdue on screen, and it comes back to director and co-writer Lorene Scafaria.

During the 2019 Toronto International Film Festival, I sat down with Scafaria to find out more about making the film, the process, the story, and what made her so passionate about directing this film in particular.

Hustlers is out now on Blu-ray and DVD.

What makes this film different from the decades of films we’ve seen before about strippers?

Lorene Scafaria: “I guess there’s so few movies that tell it from their point of view. Even when they have, I’m not sure that they’re told with the same, I don’t know, humanity, empathy. I just really was excited to walk in their shoes and really see what they experience on a daily basis; the pros, the cons, the good days, the bad days.”

Can you talk about assembling this incredible cast–one so diverse, and how difficult or easy that was?

Scafaria: “It was a lot easier once Jennifer Lopez was attached, obviously, to get a lot people interested.”

“The miracle was probably scheduling all of these people who, obviously, have incredibly busy lives. Cardi [B] was very busy. Lizzo was touring. We just found windows somehow. I think a series of miracles happened.”

“I was really excited to assemble this group of people. It started with Jennifer and then Constance and then building around them. Lizzo, Cardi, those are roles I wrote for them along with Trace Lysette and Jack the Stripper as she’s known, Jacqueline Francis. She plays Jackie. I had kind of pulled all of these people in that I had really wanted to see in a locker room together. I just kind of can’t believe it worked out.”

Can you talk about the tone of the movie? People are getting hurt, and I’m wondering how you balanced that to create sympathy for the characters?

Scafaria: “I wanted to tell a fuller story before it certainly turned to a crime drama. Obviously, there’s a point of no return for them. For me, I think we all know the difference between right and wrong. I wasn’t trying to convince anyone that wrong was right or right was wrong. I was just interested in seeing what they were up against in their industry, how much the financial crisis had an affect on their industry.”

“Obviously, it had an affect on all of us, but there’s a real before and after for them, especially in New York in Wall Street’s backyard.”

“I didn’t want to change anything, to be honest. I didn’t want to tell a black and white story. I didn’t want to convince the audience that they should root for them or root against them. I really just wanted to leave it up to audiences how they felt. There’s certainly fun and comedy involved. There’s other heavier sadder moments.”

“It was, at its core, a friendship story about these two women who form this bond and form this business together. That kind of friendship that can bail you out of trouble, but also get you into a lot of trouble. I just wanted to talk about the power dynamics.”

“There were just so many themes I was interested in. Obviously it’s a movie about capitalism and money as it relates to gender, and gender as it relates to money. I thought we’re used to seeing women spending and shopping, but not often seeing them earning and providing. I just wanted to talk about all of that.”

You were talking about writing for these actors. What do you do and what are you thinking, what are you preparing, especially when you’re writing for Jennifer and Constance? What went into crafting their characters before you even started?

Scafaria: “What’s fun about that was that I didn’t have to do much tailoring, especially for Ramona, for Jennifer. I don’t think about actors when I’m writing.”

“The minute I opened the script and tried to imagine who would play the part, it was just so obvious that Jennifer Lopez is Ramona. I just chased her down, of course, and hoped she’d be a part of it, and she was.”

“Constance, as soon as I met her, I thought, ‘Oh, my gosh. I can really see her in this role.” She has so much depth and intelligence and really understood the character; where she started from, the loneliness and isolation, the sisterhood and the camaraderie that then becomes that kind of found family. We just talked about all of those themes together. I met them separately so I only imagined them together until the camera test when I saw Jennifer put her arm around Constance for the first time. I just got chills. I was so excited to see the two of them together because their chemistry was really remarkable. They did have that big sister/little sister relationship on and off screen.”

And that moment where Jennifer wraps Constance in her fur, how did that scene come about? Because, that moment really feels like it sets up so much of the film.

Scafaria: “Yeah. That was the first scene I wrote and the last scene we shot. For me, that was always the scene. It was always about … we’ve seen Destiny now have physical contact with these men at work and strangers, obviously. That’s her job. But she doesn’t really have a relationship with these other women.”

“She, of course, has a relationship with her grandmother who doesn’t really know what she does for a living. She doesn’t really have that connection with a peer or anyone in her own space. To see that happen all at once, to have Ramona open up her fur coat and then wrap her up in it like a little baby kangaroo or something; that was always the idea was to have her go from nobody to like that, enveloped immediate intimacy with another woman.”

“I feel like, if Jennifer Lopez invited you into her fur coat, you’d probably do whatever she said after that.”

To what extent is this the antidote for Paul Verhoeven’s Showgirls? And is this film and the strip club a metaphor for the United States right now?

Scafaria: “Yeah. I mean, the rules of the club are kind of the rules of the world. There is certainly a broken value system in which women are valued for their beauty and their bodies, whether that’s for sex or motherhood; and men are valued for their success and money and power. I think, especially in America, that trickle down feels very dangerous and seems to seep into all kinds of things that are affecting our lives because of that toxic masculinity.”

“I have enjoyed Showgirls, obviously. I actually haven’t seen it in a minute so I didn’t watch it for this. I didn’t really watch a lot of stripper movies for this. It was a little bit more about sports movies and gangster films and friendship stories, and things like that. There are some dance movies that have inspired me. But in a way, it was a little bit more about the relationships and the humanity of it.”

“But, yeah, America is a strip club.”

“The truth is, even the men… when greed is rewarded in such a way, I certainly can fault them for what happened to the global economy as a result of the financial crisis. But, I also look at that and go, ‘look at all of us trying to just navigate this really broken system’. I wanted to just approach it with empathy and say, ‘what’s the difference?'”

“If we’re all valued in these different ways and the club is a microcosm of that, it felt very on theme for what’s going on right now. And, kind of a fun way to show this very recent period piece. Because, I was very interested in talking about very recent history. As if, somehow, I’m nostalgic for 2007. I never thought I would be nostalgic for 2007. If, ‘how did we get here?’, is a question we wanna ask, we can probably just look right back there.”

Why did you feel so strongly about making this film? What was the motivation?

“So, I felt like people were judging the characters for, not just where they ended up, but for where they started. As a person who feels like I grew up with these girls, I grew up with these guys, like I worked in a boiler room when I was 17. It was just a room full of phones where guys were selling bad stocks to old people. I have friends who stripped; became strippers after high school, college. Paying off student loans. I guess I just saw it as a story about people, but the themes were the things I wanted to talk about. I felt like there were themes … the broken value system; these are things that I have just been raging about on my own back porch for a number of years.”

“I wrote the script, even though I knew it wasn’t my directing job to start. I was trying to write the script to get myself into the director’s chair and then it took a long time to convince people. I made a sizzle reel. I cut together footage of other movies to try to show this proof of concept to everyone. That was the other part of it.”

“It wasn’t just getting the directing job. It was proving to people that this was a story worth telling. It felt like every headline in the news was only making it more relevant to me, and more urgent.”