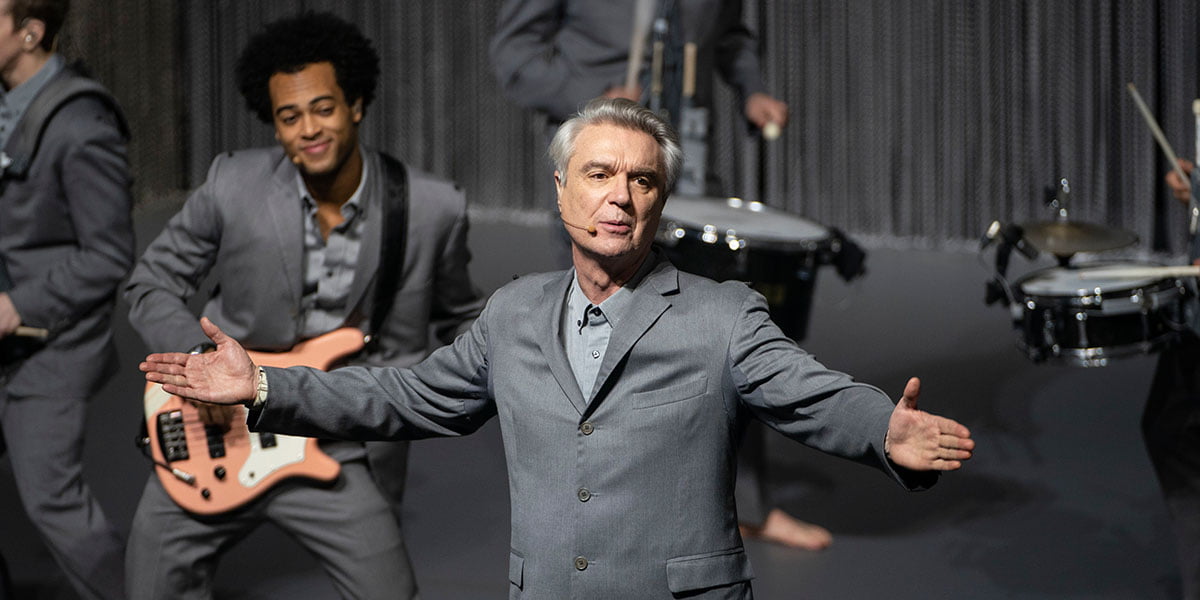 Continuing along with TIFF’s penchant for frequently kicking off the festival with a musical themed movie, David Byrne’s American Utopia is one of the most memorable and enjoyable opening night films in recent memory. It really makes one wish they could dance and sing along with others while watching it.

A filmed adaptation of musical virtuoso Byrne’s popular 2019 stage show at the Hudson Theatre in New York City (itself spun off from his 2018 album of the same name), American Utopia finds its star flanked by a tight, multicultural backing band on a minimal stage with his now trademarked matching suits and shoeless dancing.

It’s well in line with previous cinematic efforts from Byrne, falling somewhere between the stripped down tricks of light found in Jonathan Demme’s seminal Stop Making Sense and stopping just shy of the rigorous and raucous stadium packing theatricality of Contemporary Color. But what sets David Byrne’s American Utopia apart is his collaboration here with a filmmaker the caliber of Spike Lee behind the camera.

It seems like an odd combination on paper, but when one considers that both Lee and Byrne use their chosen artforms to make sense of a senseless world – railing against awful attitudes and injustices – it’s easy to see them as kindred spirits. Lee and his cameras go all over, above, and around the minimalist stage, making sure that it looks and sounds as great as possible without the viewer being in the audience. At some points, the production and direction are so perfectly in sync that it makes one forget there’s a live audience in the theatre.

Although Lee adds a bit here and there (most notably enhancing an unexpected and poignant cover of Janelle Monáe’s protest song “Hell You Talmbout”), this is still Byrne’s vision, show, and sound, with “I Should Watch TV” and “I Dance Like This” emerging as bigger standouts than some of the Talking Heads hits that get trotted out to the adoring fans in attendance. But Byrne and Lee are both on hand for a reason: to deliver some keen social commentary and advocacy along with the good times.

David Byrne’s American Utopia opens the 2020 Toronto International Film Festival with a trio of socially distanced outdoor screenings on Thursday, September 10 at the Visa Skyline Drive-In at CityView (starting at 8pm), West Island Open Air Cinema at Ontario Place (9pm), and RBC Lakeside Drive-In at Ontario Place (9:15pm). It will be available to stream as part of the online festival component via Bell Digital Cinema for a limited time starting at 6pm on Wednesday, September 16. All TIFF online screenings are geoblocked to Canada.

David Byrne’s American Utopia will be available to stream on Crave in Canada and HBO Max in the U.S. later in the fall.