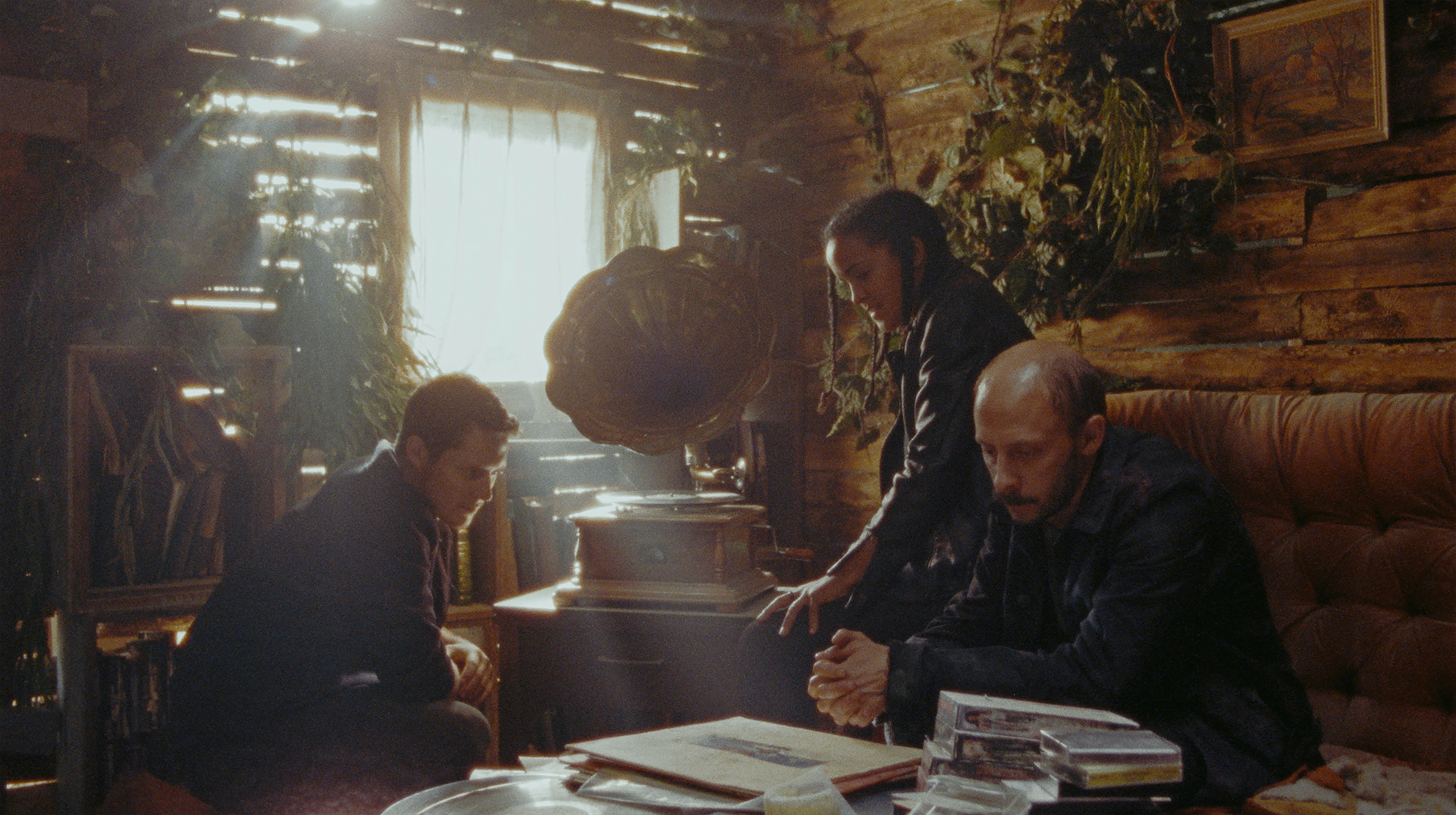 The third programme of shorts at the 2020 Toronto International Film Festival is an embarrassment of riches, with seven of this year’s very best offerings all under a single banner, and most of the films thriving on tension (and in some cases, a release). They also have a common, unlikely unifier: they all boast the best scores or musical selections out of any of the shorts programmes this year.

The Archivists (pictured above) is the latest from short and feature length Canadian filmmaker Igor Drljaca (seen previously at the festival with the likes of The Waiting Room and The Stone Speakers), and it’s wildly different than anything he’s attempted before. Balancing mournfulness with a great deal of playfulness, Drljaca takes three of Canada’s finest and most underrated actors and spins a dreamlike story of a post-apocalyptic world. Noah Reid (on strings and vocals), Bahia Watson (percussion), and Maxwell McCabe Lokos (keyboards) play a roaming band wandering a wasteland where old world artforms have been outlawed. Equal parts cautionary and hopeful – building to a truly toe-tapping climax – The Archivists is the most entertaining work of Drljaca’s career to date.

Another Canadian entry into Programme 03 is the low key but emotionally devastating Benjamin, Benny, Ben from director Paul Shkordoff. A young black man (an exceptional Anwar Haj) is nervously going over what he wants to say while walking to a job interview. An unfortunate accident happens along the way, threatening to derail everything the titular character is working towards and making him increasingly desperate. Shkordoff has created a nerve-fraying and deeply empathetic work that forces viewers to question how difficult and stressful it can be to be a person of colour searching for work. If the character in this narrative were white, there wouldn’t be a story. In Shkordoff’s film, one false step could set an entire life back.

Boasting a gorgeous and classical looking style of animation involving paper cut outs, Reza Riahi’s Navozande, the musician is a wordless tale bursting with life. Set in 13th Century Persia – around the time of the Mongol invasion – a blind musician playing for the court plays his tale of woe in hopes that someone will listen and understand his pain. Riahi’s film bristles with the visual splendour and emotional turmoil of an epic legend come to life. Don’t be too surprised if the Academy keeps this one firmly in mind later in the year when coming up with Best Animated Short nominees.

Senegalese filmmaker Moly Blank’s Sër Bi follows a young woman named Zusana (Madjiguene Seck) as she spends the day before her wedding frantically trying to fulfill an archaic religious and social custom that’s depressingly still practiced all over the world today. Zusana has previously slept with another man, and her knowing family demands that she get a procedure that will “give her virginity back,” or else she risks bringing dishonour to the family or potentially a fate even worse than that. Blank’s look at an often untalked about but stressful point where religion, gender stereotyping, and marriage unfortunately intersect. As Zusana bounces around between dodgy looking medical clinics and dubious faith healers all willing to make a quick buck off the anxiety of others, one wonders if the dangers of her mission are worse than the potential fallout, making one care deeply about that fact that she was even put into this position in the first place. Sër Bi is a vital and timely look at the unfair expectations that many women have placed upon them. It’s tremendous.

Jeremy Schaulin-Rioux’s memorably stylish, subtly creepy, and original short Rules for Werewolves is a tantalizing mixture of a heist flick, a coming of age indie drama, and horror mythology. A bunch of teens have broken into a house and begin to ransack the place, for reasons that remain a mystery. One of the kids (Finn Wolfhard) is holding court in a separate room, relating a story to the other members of his pack. Another (Kelcey Mawema) tours the house and shows increasing concern with what she sees. The details are in the wealth of atmosphere here, and both of Rioux’s leads put in great performances that add to the mystery at hand. Rules for Werewolves is the kind of film that one wants to watch a second time as soon as it ends. It gets under your skin and lodges itself in your brain until long after it has ended.

Speaking of heists, RKLSS is starts off built around a similar concept: young people pulling off a crime. But here, self-taught animator and prison reform advocate Tank Standing Buffalo reflects on his time spent on the streets and in prison as a young offender with a bit of playfulness and a lot of poignancy. RKLSS is a colourful, chaotic, pulse pounding, and thoughtful meditation on finding comfort and solace in art. It’s an action flick and gutting prison drama combined into one package with a dash of surrealism that feels perfectly in place.

French filmmaker Naïla Guiguet’s short Dustin is a party movie that feels less like a celebration and more like watching a hangover slowly enveloping people in real time. That’s not a criticism. It’s a compliment. Dustin follows its titular protagonist (played by transgender model and DJ Dustin Muchuvitz) as she attempts and fails to have much fun at a warehouse party and the following after-party. She’s repeatedly ditched by friends, is too broke to buy any more drinks, and is constantly being misgendered. It feels very real to anyone who ever had a rough night out on the town, and Guiguet amplifies those feelings to great effect through Muchuvitz’s detailed and compulsively believable performance. It’s a wonderful cap to an outstanding programme of short films.

Short Cuts Programme 03 screens as part of the 2020 Toronto International Film Festival starting at 6:00 pm on Sunday, September 13 via Bell Digital Cinema. All online screenings at TIFF 2020 are geolocked to Canada.