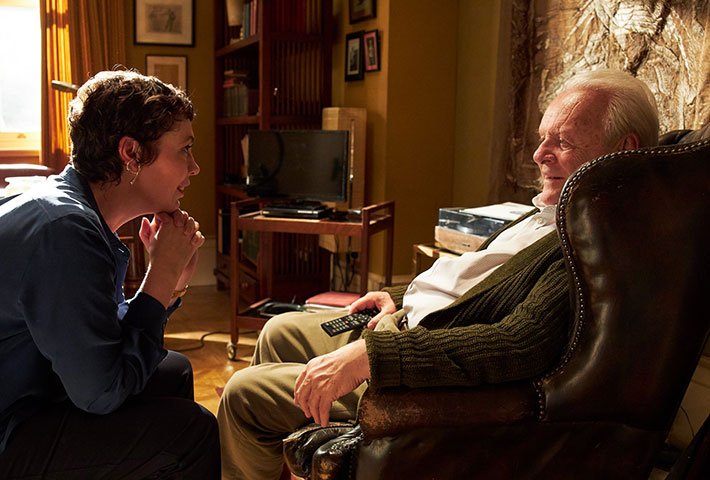 Sir Anthony Hopkins gives his best performance since the early 90s in director Florian Zeller’s complex and sorrowful drama The Father. A heart-rending, but worthwhile look at the fears of growing old and losing track of one’s memories, The Father speaks volumes about Hopkins’ titular character and a person’s desire to hang onto the last vestiges of humanity at all costs.

Hopkins stars as Anthony, a former engineer who staunchly refuses to leave the London flat where he’s spent most of his adult life. Although battling with rapidly advancing stages of dementia, Anthony refuses to give up his independence, much to the chagrin of his concerned and perpetually stressed out daughter, Anne (Olivia Colman), the men in her life, and any nurse that attempts to help the old man.

Zeller, adapting his own play for the big screen, tells the story from Anthony’s unreliable perspective, making The Father a film that finds great power, nuance, and sadness in the main character’s plight. In a unique, truthful, and dramatically original storytelling gambit, the course of Anthony’s life can change by turning a corner in his apartment or whenever someone leaves a room. It’s disorienting and surreal, but it speaks volumes to living with dementia in one’s family.

At turns unrepentant and deeply plagued by regret, Hopkins’ deeply personal and unshowy performance (where the character not only shares the actor’s name, but also a birthday) is the finest he’s given since The Remains of the Day, even towering over his iconic, Oscar winning turn in The Silence of the Lambs. It’s a full bodied and intelligent performance matched expertly by Colman, who offers the necessary counterpoint that caregiving is often hell on the caregiver. Hopkins is fully committed to his character, and Zeller’s work is just as committed to him.

The Father is a case of a leading performer and director working without fear in a drama that hinges on uncertainty. They openly court making the viewer as frustrated as Anthony feels, resulting in one of the best films ever made on the topic of aging.

The Father screens at the 2020 Toronto International Film Festival on Monday, September 14 at 9:00 pm at RBC Lakeside Drive-In at Ontario Place. It’s also available to stream for a limited time via Bell Digital Cinema starting at 6:00 pm on Tuesday, September 15. All online TIFF 2020 screenings are geolocked to Canada.