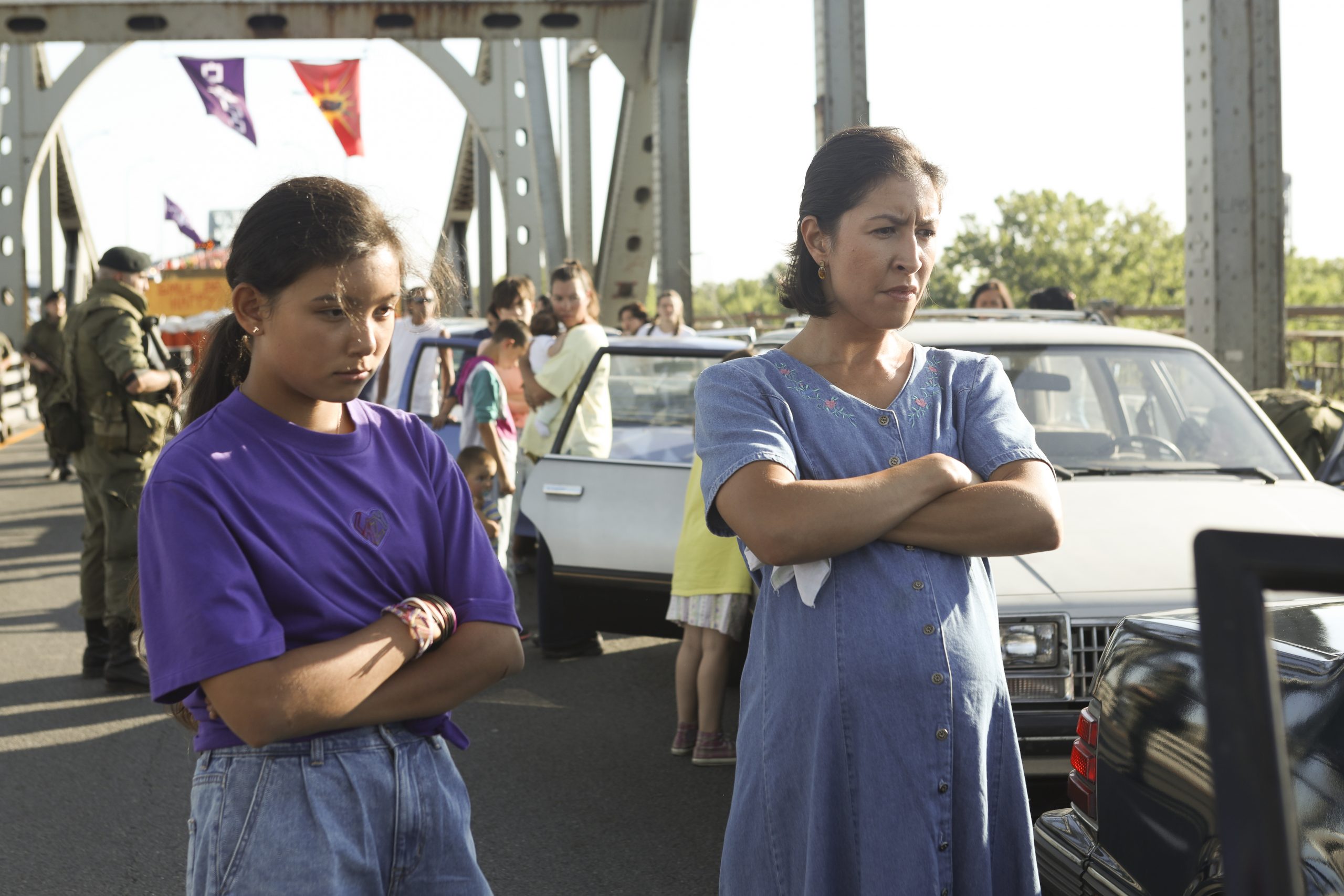 Canadian produced coming of age stories aren’t anything new, but few are as layered, complex, and profound as Tracey Deer’s flooring Beans. Cutting straight to the heart of childhood innocence lost, Beans unfolds across an historical flashpoint in indigenous and Canadian history – the stand-off between the Mohawk people and the Quebec government in 1990 – and uses that moment to poignantly and often stressfully depict the pitfalls of growing older and hardening to life’s injustices.

At the outset, 12-year old Tekehentahkhwa, a.k.a. “Beans,” (Kiawentiio) is a happy-go-lucky kid living on Mohawk territory in Quebec with a loving mom (Rainbow Dickerson) and dad (Joel Montgrand) and an adoring little sister (Viola Beauvais). She doesn’t know what she wants to be when she grows up or study when she makes the jump to private school in the fall, but she admires her cousin and father for standing up for indigenous rights when golf course developers want to remove a sacred burial ground. As the clash between non-violent protesters and local and military authorities intensifies, Beans repeatedly bears witness to and suffers from racist attacks from the white community at large. In a bid to toughen herself up, she starts hanging out with “the bad kids” in town. At first, she’s shunned for her relative level of privilege, but once she starts proving herself to her new friends, she starts down a darker, more cynical path; one that might cause her to lose sight of the advocacy efforts she cherished in the first place.

Deer, who’s probably best known for her documentary work and the series Mohawk Girls, masterfully weaves the historical impact of the siege at Kanehsatake (incorporating lots of terrifying news and documentary footage alongside her own images and reconstructions) with a full bodied arc of a very likable girl in freefall. While many kids entering their teenage years will experience events similar to those faced by Beans, many won’t go through these changes and rites of passage during such a violent time. While the story is indigenous and set in a stunningly realized vision of 1990 Quebec, it’s hard not to think about black teenagers going through something similar at this very moment. Beans speaks volumes to the marginalized experience, and why the struggle to have a “normal” and “comfortable” life is often impossible for indigenous families.

Beans is elevated to perfection by Kiawentiio who delivers one of the year’s best performances from an actor of any age. She grasps the complexities of this character and her world expertly, providing a wealth of empathy and dramatic accomplishment to an already phenomenal film.

Beans screens in theatres at TIFF Bell Lightbox during the 2020 Toronto International Film Festival on Sunday, September 13 at 12:00 pm and 12:30 pm. It will be available to stream online for a limited time via Bell Digital Cinema starting on Tuesday, September 15 at 6:00 pm. All digital screenings at TIFF 2020 are geolocked to Canada. If seeing a film in theatres, remember to take all necessary precautions. Practice social distancing, wear a mask, and don’t attend a screening if you’re feeling under the weather.