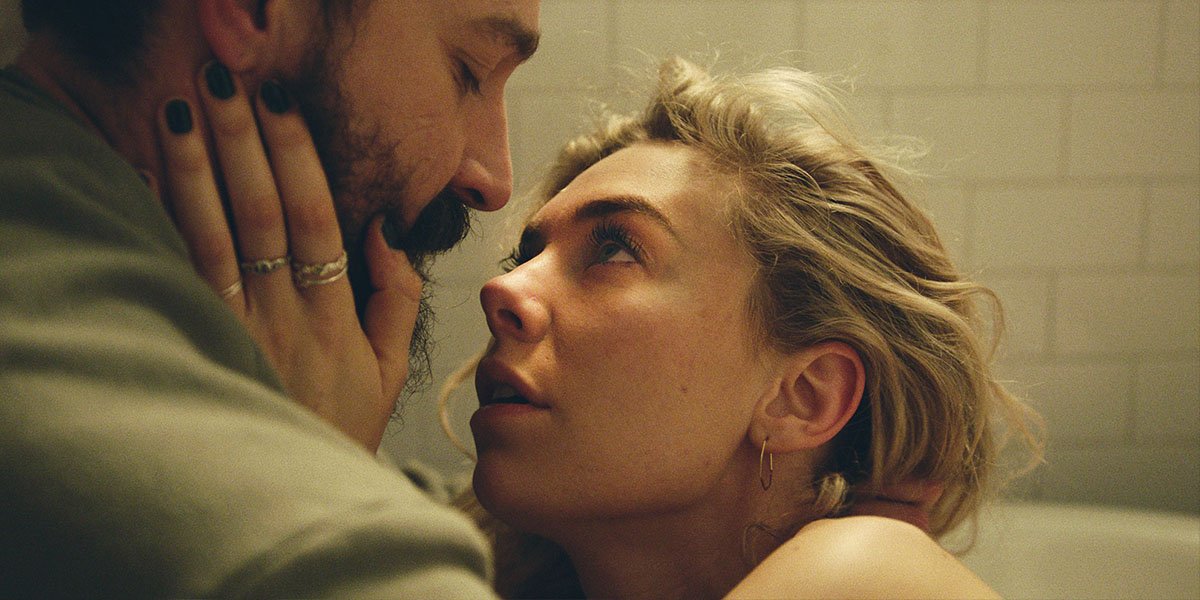 Hungarian filmmaker Kornél Mundruczó’s gutting, powerful, and socially commendable domestic drama Pieces of a Woman opens with what’s bound to be the most talked about and uncomfortably memorable sequence in any film this year. The true power of Pieces of a Woman, however, lies in the increasing emotional toll of every moment that follows in its wake.

Martha (Vanessa Kirby) and Shawn (Shia LaBeouf) are a happily married Boston area couple expecting their first child. Their lives are shattered when something goes awry during their home-birth (the aforementioned sequence noted above, clocking in at nearly thirty minutes and designed to look like a single take). Martha and Shawn’s relationship is destroyed by what happens, and everyone in their lives – including Martha’s well-to-do and overly image conscious mother (Ellen Burstyn) – is looking for someone to blame. The only person who wants to move on is Martha, a woman determined to deal with her feelings on her own terms.

Pieces of a Woman is a tough and emotionally brutalizing film to watch, but that shouldn’t be much of a surprise to those familiar with Mundruczó (White God, Jupiter’s Moon) and screenwriter Kata Wéber’s previous collaborations (with the director allowing his writer to share a top line credit here). It’s a look at the stigmatization of grief that’s rarely discussed with any detail. Everyone in the film is struggling in their own unique way, and they’re all judged harshly by other parties for not acting in the same manner. It’s not like watching someone shouting at a brick wall, but rather like several walls shouting at each other, and it’s devastating and painfully realistic to behold.

Kirby (who just picked up the Best Actress prize in Venice for this performance) slowly finds the layers within Martha, giving a star turn that only builds in intensity and purpose. She has exceptional dramatic chemistry with LaBeouf – who’s equally noteworthy and giving the best performance of his career as the affection starved husband – and Burstyn. If there’s anything amiss here, it’s that Mundruczó’s decision to start the film off with such a showy, stylistic bang that everything else to follow feels static in comparison. Still, Pieces of a Woman earns its place as being one of the most talked about films of the year. It’s message about allowing people to process trauma at their own pace is one of the most poignant ever put to film.

Pieces of a Woman screens again online at TIFF 2020 via Bell Digital Cinema starting at 6:00 pm on Wednesday, September 17. All TIFF 2020 online screenings are geolocked to Canada. It also screens outdoors at the Visa Skyline Drive-In at Cityview on Wednesday, September 16 at 9:00 pm and indoors at TIFF Bell Lightbox on Friday, September 18 at 9:00 pm. If attending a screening in cinemas, please take all necessary precautions. Practice social distancing, wear a mask, and please stay home if you feel under the weather.