A well constructed and dutiful adaptation of one of the greatest novels ever written, Rebecca is a film that’s damned to being eternally compared to an Oscar winning version of the same story from one of history’s most vaunted filmmakers. For many critics, it will be impossible to divorce British filmmaker Ben Wheatley’s adaptation of Daphne du Maurier’s novel from the memory of Alfred Hitchcock’s 1940 Best Picture winner. Hitchcock’s Rebecca might not be the master of suspense’s most widely beloved or viscerally entertaining film, but among film scholars and critics, it’s one of his most highly praised and prized works (probably because it was the director’s only film to win the Academy’s top prize). Although Wheatley’s Rebecca sticks closer to its source material and du Maurier’s themes than Hitch’s film did, the film – which is better than many will give it credit for being – is a lose, lose situation for any director attempting to adapt it. If one approaches Wheatley’s Rebecca like a literary adaptation or an old school melodrama and not as a straight cinematic remake, they’ll be in for a lavishly designed, intriguing, well performed, and wholly pleasant surprise.

A perpetually put upon and emotionally abused “lady’s companion” (Lily James) to a boorish, aging, insistent socialite (Ann Dowd) catches the fancy of the attractive, witty, wealthy, and recently widowed Maxim de Winter (Armie Hammer) while on holiday with her boss in Monte Carlo. Desperate to escape her unhappy life and caught up in a whirlwind romance, the woman agrees to Mr. de Winter’s impulsive marriage proposal and invitation back to his posh British estate, Manderley. The young woman – who only has passing knowledge about high society – immediately feels out of place in Mr. de Winter’s cavernous home; a place where the memory of his deceased wife, Rebecca, still looms large. Once back in England, Mr. de Winter’s disposition grows gradually darker and more withdrawn. The overall pall of melancholia isn’t helped by Manderley’s stringent housekeeper, Mrs. Danvers (Kristin Scott Thomas), who insists on keeping Rebecca’s memory alive, even if it means alienating and gaslighting the new Mrs. de Winter into leaving her husband.

Wheatley (Kill List, Free Fire, High Rise) has always been a detail oriented filmmaker, making him a near perfect choice to bring du Maurier’s novel to life in a new context. Never one to shy away from the dark side of both middle and upper class society, Wheatley strives to create an immersive world and moody tone that speaks louder and more clearly than the admittedly basic screenplay from Joe Shrapnel and Anna Waterhouse (who worked together on Seberg and Race) and frequent Matthew Vaughn collaborator Jane Goldman. The script is solid bedrock for a decent film, and a tonally faithful reworking of du Maurier, but Wheatley, his team behind the camera, and his trio of leads are what ultimately make his adaptation of Rebecca a success.

Rebecca takes place in the 1930s and looks every bit the part thanks to Wheatley’s masterful way of setting a scene. The production design, costuming, cinematography, lighting, and composition are all certainly worth fawning over. Visually, Rebecca is overwhelming, which is a perfect way to place the viewer into the head of the increasingly confused and despairing Mrs. de Winter. Whether doting over white sand beaches, rain streaked windows, classic cars, or textured walls that bring to mind Nicholson paintings, Wheatley packs his frames to bursting with opulence and subtle character detail (particularly during the show-stopping Manderley Ball sequence), while never abandoning his slow burning approach in favour of flashier suspense thriller trappings. And yet, Rebecca can never be written off with that tiresome old cliche stating “the house is a main character in the story.” The characters and the morally sticky plight they’ve all backsled into remains the director’s foremost interest, but few filmmakers understand the value of a fully realized setting than Wheatley. 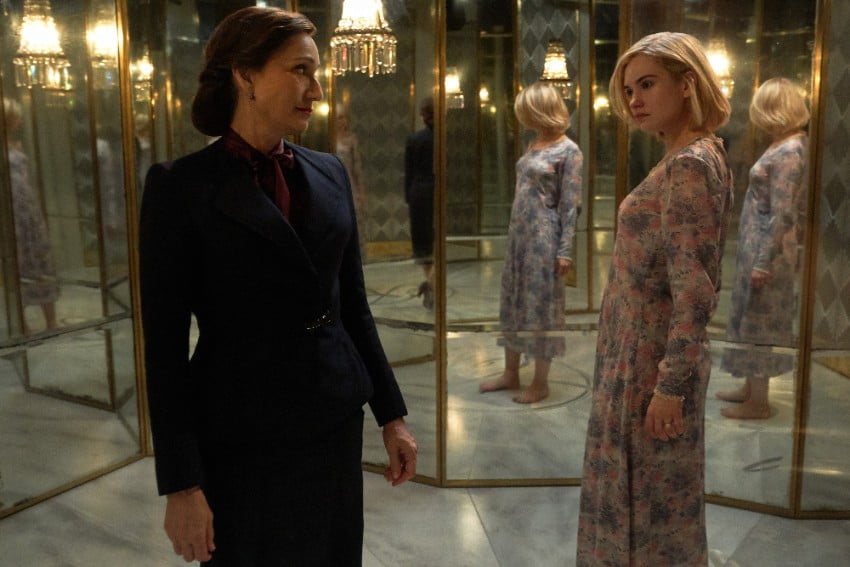 For as old fashioned as Rebecca might feel, Wheatley’s film and du Maurier’s source material still offer some timely observations about wealth and class divides. Rebecca is a story built on the notion that privileged people have the power to resist the thoughts and advice of everyone around them. (In a nice touch, the dogs at Manderley seem more forthcoming than the humans.) Even a housekeeper at a major estate like Manderley still has more privilege and status than someone with little knowledge of high society. For more than merely personal reasons, the devious and underhanded Mrs. Danvers will never see the new Mrs. de Winter as her superior, or even her equal. The power play for the control of Mr. de Winter and Manderley is further compounded by the overall impulsiveness of rich and privileged people, a constant stumbling point for all of the competing interests in play. While there are pronounced haunting and stalker movie elements throughout Rebecca, the underlying implications of the story are uniquely political. The self-contained bubble that wealth affords the well connected will only be burst when the truth is confronted head on, which is precisely what happens when Rebecca morally pivots around it’s big reveal into a different sort of thriller entirely.

The power plays at the heart of Rebecca are helped along by astute casting. James wonderfully balances her character’s intelligence and naivete, making the new Mrs. de Winter both sympathetic and intriguingly frustrating. Thomas leans into her dubious housekeeper’s darker nature by saving any and all emotional outbursts for moments that will leave the greatest narrative impact, often carrying out the character’s dirty deeds stoically, without so much as grimace or knowing smirk. Dowd brings a fair bit of character and gleeful nastiness in her short amount of time on screen, while Sam Riley adds an uncomfortable and ambiguous amount of subtle menace as an estranged friend of Maxim’s that shows up around the halfway point. But Wheatley’s greatest bit of casting is Hammer, in the sort of classic movie star role the actor was practically born to play. Utilizing his conventional good looks and almost effortless charm to its greatest effect yet, Hammer seems to know that no matter what he says or does, his action can either appear altruistic, healing, or self-serving. Rebecca hinges upon wondering whether Mr. de Winter is as much of a victim of gaslighting as his wife or if he’s secretly a cad. Hammer effortlessly walks that razor’s edge throughout his performance.

Overall, however, the best thing about Rebecca is that it’s trying to be a du Maurier adaptation and not a Hitchcock remake. While Wheatley obviously can’t avoid such comparison, he keeps his few direct homages to Hitch at a bare minimum. Wheatley’s Rebecca is good enough to feel like a product of Hitchcock’s time, only interpreted by a completely different filmmaker. There’s never a sense that Wheatley wants to out-do Hitchcock, but always a profound feeling that the filmmaker is creating something in his own vision from someone else’s material. Calling Rebecca a remake is akin to suggesting that every Shakespearian or Jane Austen adaptation is a rebooting of a movie, not of the source material. While many critics already haven’t given Wheatley’s latest a fair shake, his take on Rebecca is a work that remains doggedly determined to be judged on its own terms.

Rebecca is available to stream on Netflix starting on Wednesday, October 21, 2020.