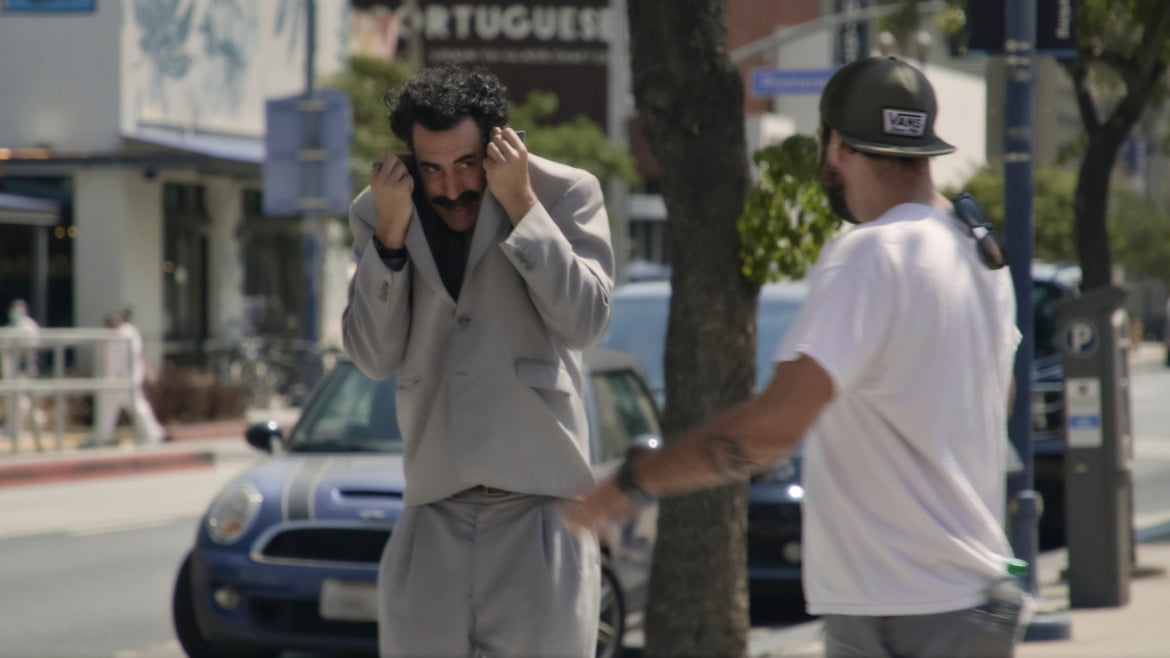 Borat: Subsequent Moviefilm: Delivery of Prodigious Bribe to American Regime for Make Benefit Once Glorious Nation of Kazakhstan is either the most or least necessary sequel, depending on your feelings about subversive, guerilla, cringe comedy. No one is more cognizant of this than the film’s star and mastermind Sacha Baron Cohen, who has intelligently and hilariously found a way to comment on how the world simultaneously needs Borat but doesn’t need another bigoted, oblivious blowhard steering social and political conversations. While it doesn’t hold the same kind of jaw dropping and gasping shock factor that a lot of Cohen’s earlier comedies did, Borat: Subsequent Moviefilm (which began filming pre-pandemic in secret and finished up production recently) is strangely more substantive and purposeful. While some might see that as a betrayal of what the character stood for in the first place, Borat: Subsequent Moviefilm has been made to ensure that people who genuinely get the joke will love and understand it, while slobbering “fans” who only enjoy saying “mah wife” or “very nice” unironically are told to get on board with the new tone or be further alienated by Cohen’s evolution as a performer and unlikely social activist.

While Kazakhstan’s bumbling, uncouth, and horrifically ignorant fourth or fifth best journalist, Borat Sagdiyev (Cohen), made a splash in the United States with his first reports on American life and culture, he has been imprisoned back in his home country for making them all look like idiots. Borat finds his life sentence of hard labour cut short after fourteen years when he’s told to head back to America and deliver a unique gift to a high ranking member of Donald Trump’s inner circle, in a bid to elevate Kazakhstan’s status. Unexpectedly tagging along for his latest (mis)adventure is his daughter, Tutar (Maria Bakalova), a young woman who has spent her entire life chained up in a barn and one day dreams of becoming the next Melania Trump.

Borat: Subsequent Moviefilm gets off to a blistering pace, packing the dialogue and frame with jokes practically every second, which is a solid approach for a character whose element of surprise was killed off over a decade ago. For the longest time, Cohen suggested that the character of Borat (which began its life as part of the writer-actor’s menagerie of misfits back in the UK) was retired because he was too instantly recognizable and no one would give him the insane level of access to celebrities and world leaders that he was once afforded before people knew better. Borat: Subsequent Moviefilm shows early on that Cohen can’t walk a few feet down any street in America while donning the character’s trademarked cheap suit and soup-strainer moustache without causing a scene. Essentially, for this project to work, Borat – in a great bit of metacommentary – has to do exactly the sort of schtick Cohen has perfected across his career.

The primary gag here is that Borat has to disguise himself to look like “average Americans” or various other kinds of foreigners to accomplish his mission like he’s the world’s worst spy, which isn’t a stretch for Cohen who has an unshakable fascination – both comedic and dramatic – with undercover operatives. Borat might be hiding under a lot of padding, outlandish clothes, prosthetics, and facial hair, but in a wise decision, Cohen rarely disguises the character’s instantly recognizable voice. Perhaps the a better and riskier take would be if Cohen tried to infiltrate some of America’s most problematic corners as himself, rather than as a character. At any rate, the results of Borat: Subsequent Moviefilm are a lot more assured, thought out, and resonant than his similarly themed series Who Is America? from a few years back. Here, the gimmick and Cohen’s unbridled desire to expose bigotry in all forms are working perfectly in tandem rather than competing for screen time.

The addition of new collaborators into the Borat universe brings a lot to the table. While comedy legend and legendary cynic Larry Charles isn’t directing Borat: Subsequent Moviefilm, Jason Woliner proves to be a great replacement. Woliner has spent most of his career working in sketch comedy or on series that already adopt a documentary aesthetic as part of their identity (most notably on the unforgettable finale to Borat’s more subtly realized heir apparent, Nathan for You), and the filmmaker inherently understands Cohen’s motivations. Equally great is Bakalova, who emerges every bit as Cohen’s equal here. In a smart move to keep his own film’s construction a secret, Cohen lets Bakalova do as much as Borat, and she’s more than game to take things to similarly ridiculous limits. 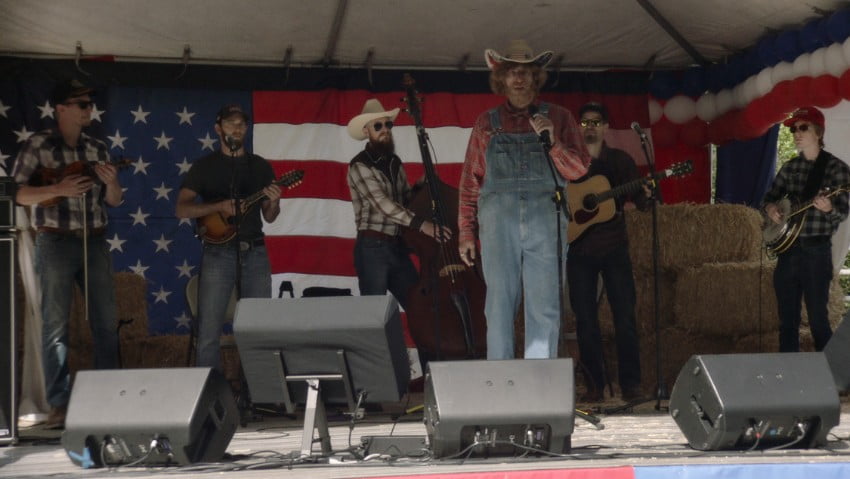 Borat: Subsequent Moviefilm and its predecessor work well because any viewer who isn’t immediately disgusted or vexed by what they’re seeing wants to stick around long enough for the other shoe to drop. Cohen and Bakalova put themselves into outlandish, often dangerous situations, trying to bait unwitting, but obviously biased “interview” subjects or targets into saying or doing sexist, racist, or anti-semitic things. He’s not above spending hours or days at a time to make this happen, as evidenced by Borat spending considerable time in quarantine lockdown with some surprisingly complex conspiracy theorists. From debutante balls in Macon, Georgia and various meetings of pro-Trump groups to large scale demonstrations of anti-maskers proudly toting automatic rifles and Christian “pregnancy crisis clinics” that refuse to suggest abortions for any reason whatsoever, Cohen wants to unmask the fallacies of short-sighted, self-serving thinking.

It’s uncomfortable to sit through, but that’s the point, especially during the already heavily discussed climactic “prank,” where a prominent American politician and pundit is caught behaving so inappropriately that there’s no way they could spin it into anything positive. Any laughs to be found are supposed to be cathartic for any viewer strong enough to stick around; a necessary release of tension. It’s a deliberately risky tactic for something that can be written off by Cohen’s detractors as being too silly to take seriously, but it’s also a provocation to thought, not mere disgust. Cohen’s work, like most masterful satirists, is to make people think about why they’re laughing in the first place.

But Borat: Subsequent Moviefilm also has something many of Cohen’s supporters might balk at: a heart. Certain portions of Borat’s latest journey are obviously scripted, and only barely blurred into the film’s numerous “gotcha” moments. It’s meant to give Borat: Subsequent Moviefilm something akin to a substantive plot revolving around a deeply problematic father-daughter relationship, and fans of Cohen’s brand of anti-comedy could see that as a sell-out move. Others might see it as a softening of the character’s rough edges for difficult times. It does harm the manic momentum of the movie somewhat, but Cohen and Bakalova are skilled enough performers to make it all work.

Also, unlike many past projects where Cohen would gleefully skewer anyone in sight without prejudice or afterthought, Borat: Subsequent Moviefilm allows some genuinely decent people to get one over on the Kazakh steamroller. A trip to a synagogue starts in horrible taste (possibly worse than anything else the character attempts here, but that’s a sliding scale), but turns surprisingly sweet and hopeful. Similarly, Cohen and Bakalova’s interactions with the daughter’s confused and concerned black “babysitter” provide just as much emotion and thoughtfulness as the main storyline. Although Borat: Subsequent Moviefilm is designed to show Americans exactly how fucked they are at the moment, it’s nice to see Cohen cutting some of his subjects a good deal of slack. There are times during the character’s journey where the world doesn’t feel like a complete shit-show, and it’s nice to be unexpectedly reminded of such things through a character that’s primarily designed to poke, prod, and provoke.

Cohen’s detractors often suggest that his stunts, gags, and sketches only help to fuel the ignorance of viewers who won’t understand that this verite approach is meant to be satirical. While I’m not a huge fan of the character’s first big screen outing (which feels overly long and sometimes unfunny in all the wrong ways), I would say that Borat: Subsequent Moviefilm is just another example of how comedy is one of the riskiest and most experimental artforms. My problem isn’t in the stunts or deception, but in how the world has changed in the past fourteen years. Now that everyone is hip to Cohen’s long cons, how hard can it be for his now tarnished subjects to simply say, “I knew it was him and I was just playing along for laughs?” It’s something worth thinking about, especially in an age where anyone and everyone on the internet can say and do horrible things by simply saying “I was only kidding.” On that level, I question the overall effectiveness of Cohen’s latest, but as a project timed perfectly to the upcoming American election, Borat: Subsequent Moviefilm is a critical hit. 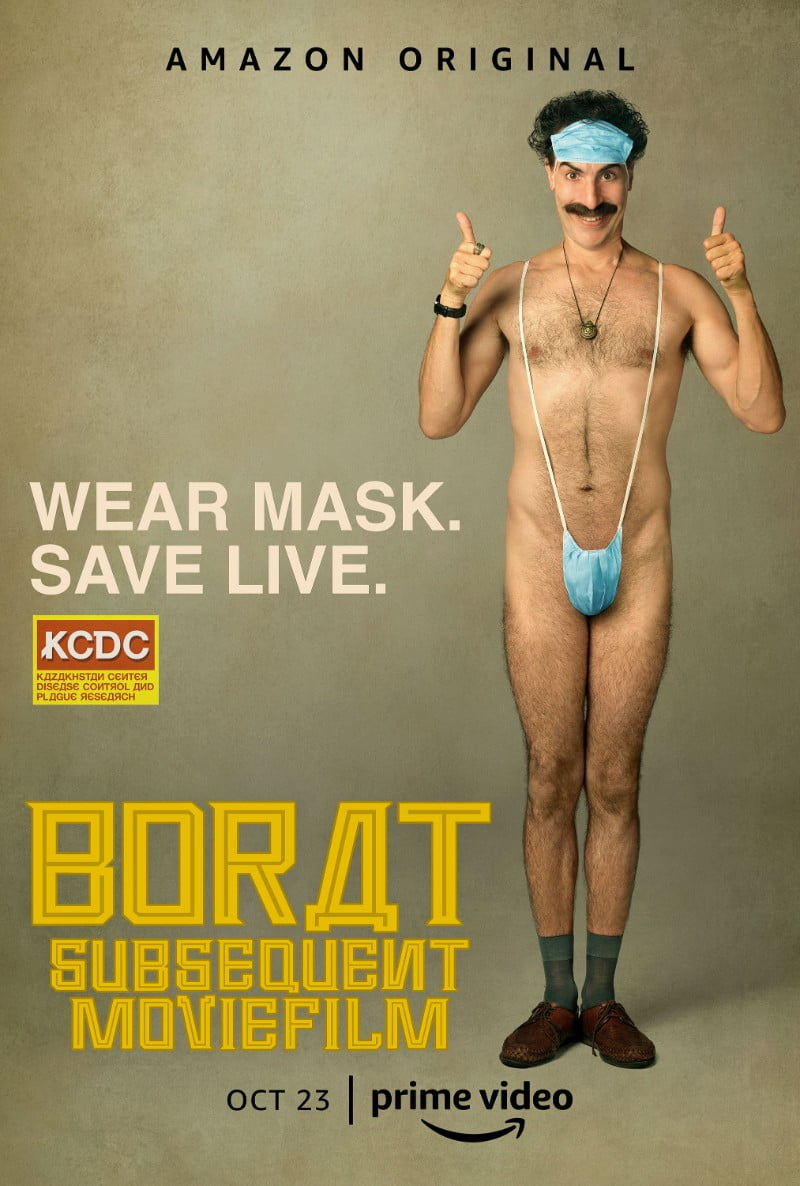