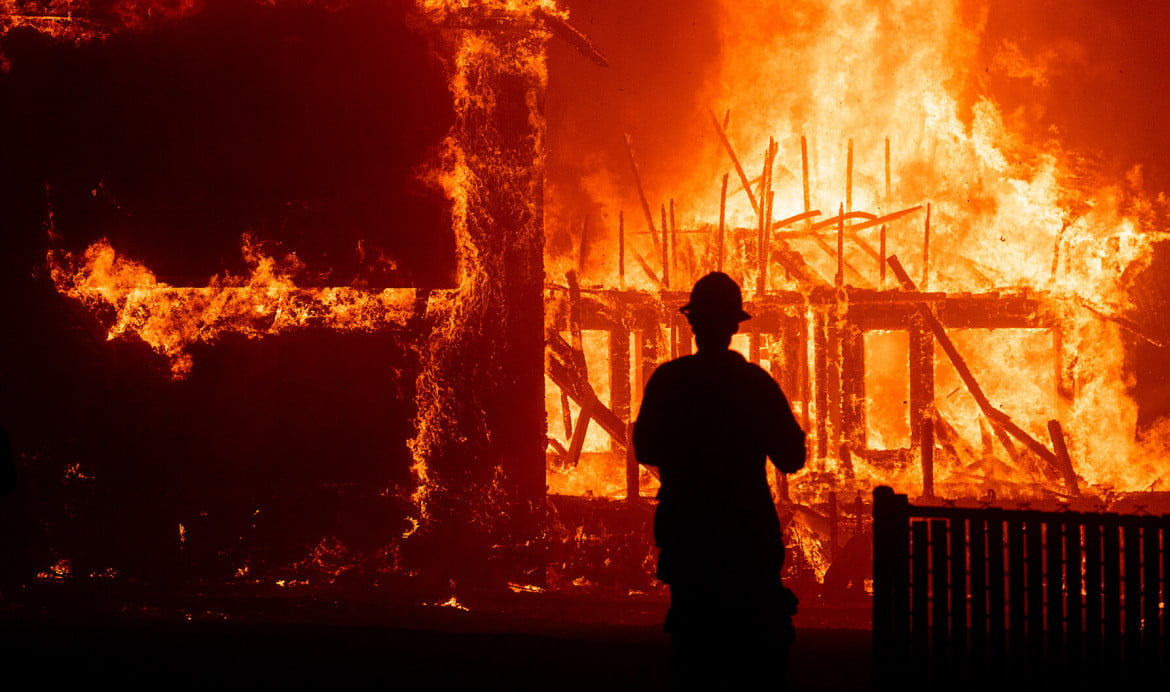 Rebuilding Paradise, a documentary by veteran filmmaker Ron Howard, is a harrowing, hopeful, and ultimately vital look at human resilience, climate change, and corporate malfeasance, but mostly, it’s about people. While Howard is no stranger to documentary filmmaking or creating fictionalized movies about the devastating effects of fire, Rebuilding Paradise is one of the director’s most empathetic and rigorously researched works to date. While a populist filmmaker like Howard is still quick to note the various ways everyday people can rise above awful situations, Rebuilding Paradise is one of his few efforts to poignantly show that things often tend to get worse following a massive disaster before they gradually start to get better.

Howard and his crew travel to Paradise, California, a small town in the Sierra Nevada foothills just north of Sacramento that was decimated by the November 2018 Camp Fire. Close to the epicentre of the wildfire – which was sparked thanks to faulty, hundred year old power company infrastructure – the town of Paradise was reduced to rubble and ash in a matter of hours. The conditions were sadly perfect for the spreading of one of America’s deadliest and fastest moving wildfires, leaving the 27,000-plus residents of Paradise scrambling to escape. Weeks after the fire had been put out, thousands of displaced residents made their way back to Paradise to take stock of the situation and decide whether they wanted to rebuild or move on to new lives. Many residents are greeted upon their return with seemingly insurmountable challenges, like FEMA restrictions, governmental bureaucracy, poverty, unanswered questions, and a severe lack of basic human resources.

Rebuilding Paradise opens with one of the best sequences in any Ron Howard film, but it’s one that the director can scarcely take much credit for outside of decisions made in tandem with his editorial team. Rebuilding Paradise launches viewers headfirst into the traumatic experience of trying to escape an encroaching inferno. Howard assembles an appropriately chaotic and deeply frightening look at survival by stitching together lots of first person perspectives. Cell phone footage, dashboard cameras, 911 calls, and first responder radio chatter all compete for attention. By 11:38am in the town of Paradise, flames were mere feet away from anyone still unlucky enough to be making their way out of town, and the sky was so thick with smoke and chemical detritus that it looked blacker than the darkest of nights. Rebuilding Paradise opens viscerally enough to shake any viewer to their very core, but Howard employs this footage for a genuine purpose and without the exploitation of tragedy. Howard wants viewers to experience the same terror felt by the residents of Paradise so they can better understand the longstanding trauma left behind and the intricacies of the recovery process.

In the months following the fire – which killed 85 people and left countless thousands with various physical or mental injuries – things would only get worse for anyone who tried to return to Paradise. Without a school for local kids to attend, the town pretty much doesn’t exist. The town’s water supply (not just for drinking, but for general usage) won’t be completely safe for anywhere between three and twenty-five years. FEMA and federal response has been slow and ineffective, with many families unable to return even if they wanted to due to financial constraints. Many residents that didn’t have family or friends to move in with are lived in communities of tents and trailers in nearby Chico that are only temporary solutions. And even though there’s a corporate entity that can be blamed for the fire starting in the first place – Pacific Gas & Electric – it’s debatable whether or not residents will ever see any money from a settlement. 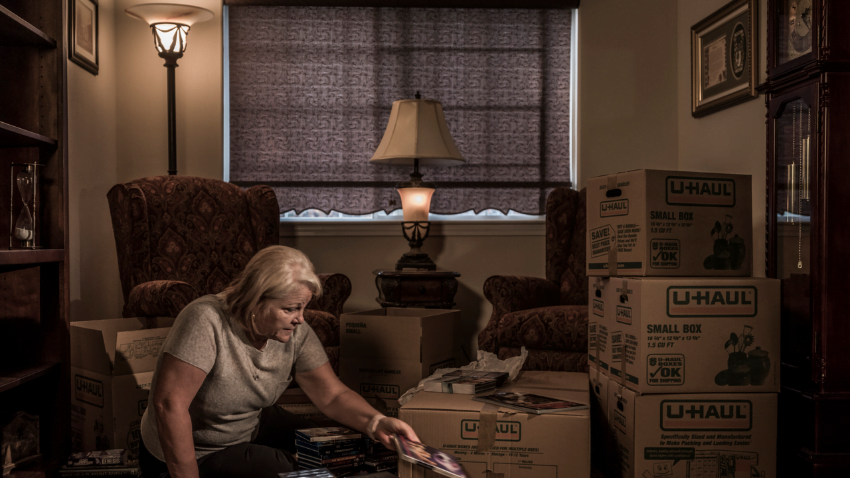 While many disapproving critics have a tendency to dismiss Howard as a shamelessly manipulative filmmaker keen on making the most audience pleasing films possible, it’s impossible to deny that the director likes to make movies about people and their experiences, even at the expense of grander themes. Rebuilding Paradise has a lot to say within its margins about holding corporations accountable for their actions, the effects of climate change, and the hoops government bodies force victims of large scale tragedies to jump through on a road to some semblance of recovery, but Howard remains focused on human beings, their families, and the sense of community they have fostered for themselves. Howard has always been a master when it comes to trying to understand and empathize with everyday people put into extraordinary situations, whether those stories are real or fictionalized. Rebuilding Paradise is Howard at his most stripped down, basic, and natural, but that’s by design. Howard stays completely out of the picture, allowing the residents, politicians, and first responders to speak directly to the viewer about the situation. It’s a film with a big heart and devoid of ego, and a nice balance between showcasing communal and individual healing processes.

Naturally, some of the chosen interview subjects and focal points stand out above others, and while it would likely be outstanding to see someone like Frederick Wiseman take an unfettered, all encompassing, verite look at the Camp Fire fallout, Howard has found a perfect cross section of humanity to speak out about their experiences. Paradise police officer Matt Gates struggles to balance his duties to the community at large with those of his young family. An older gentleman with deep ties to the community finds that the PTSD he suffered during the Vietnam War has only been exacerbated by the fire. Younger residents with limited resources, growing families, and no substantial nest eggs or insurance benefits to speak of are forced to start from scratch. Former Paradise mayor and recovering alcoholic Woody Culleton has already rebuilt his life from the ground up once before, and he’s more than eager to do it again. While the perspective of Rebuilding Paradise is an overwhelmingly white and suburban one, the stories within speak to the complicated nature of traumas both shared and unique. It’s a devastating situation for the town as a whole, but Rebuilding Paradise does an exceptional job at showing how people process large scale tragedies in different ways.

Rebuilding Paradise (which kicked off Hot Docs’ yearly Doc Soup subscription series late last month) is the sort of work that wants to move viewers to a point of reflection. While there’s some lip service being paid to holding parties responsible for the Camp Fire accountable (exemplified best by the involvement of legendary lawyer Erin Brockovich-Ellis, who famously battled PG&E in the past), Rebuilding Paradise shows that justice and financial compensation will never erase the physical, emotional, and structural scars left behind.

In an even sadder turn of events, Rebuilding Paradise (which premiered at Sundance earlier this year) feels dated in the wake of a global pandemic. While I’m sure Howard wanted to show the resilience of people facing an uphill battle towards normalcy, it’s hard not to feel even more devastated for Paradise residents who’ve had their recovery process stunted yet again by something beyond their control. Howard couldn’t have predicted any of this while he was assembling Rebuilding Paradise, but on its own terms as a cautionary tale and vehicle for human empathy, it’s an exceptional documentary.

Rebuilding Paradise airs on National Geographic Channel commercial free in Canada and the United States on Sunday, November 8, 2020 at 9:00pm EST. It will be available to stream on Disney+ later this year. 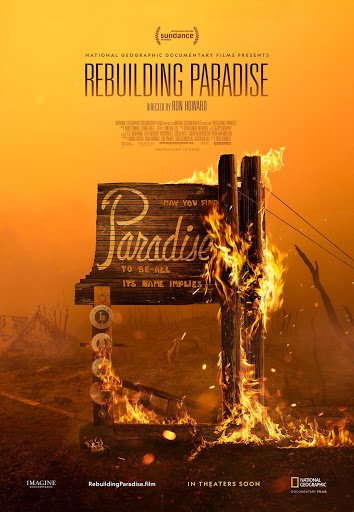