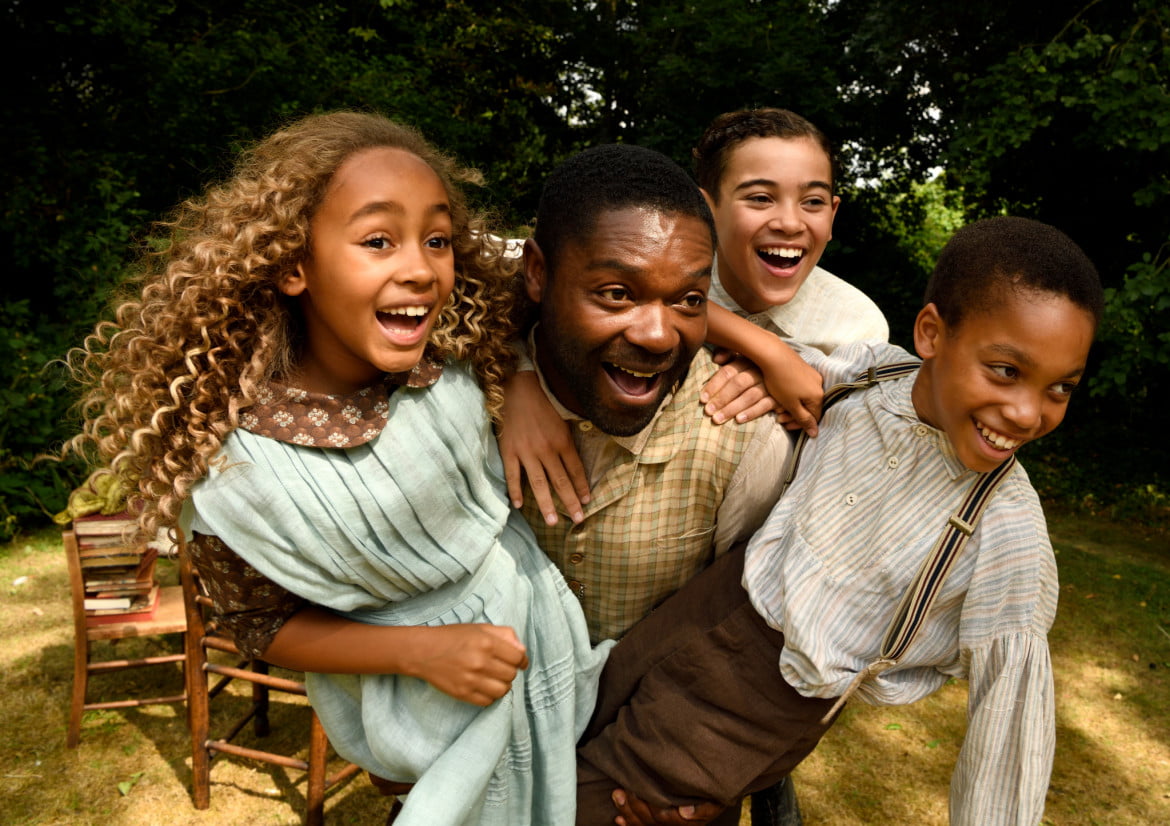 I’m not entirely certain what the audience is for the revisionist storybook fantasy Come Away, but I’m certainly happy it exists and that I saw it. A daring and gutsy contemplation of family bonds and loss that dares to rewrite two of history’s most beloved children’s stories of all time, director Brenda Chapman’s Come Away might be too bleak and heady for many kids and too fantastical for cynical adults. But for anyone who can find a sweet spot between those settings and has no qualms about Chapman’s literary influences being vastly rewritten is in for a genuine treat and one of the most original (if admittedly imperfect) films of the year.

Peter and Alice Littleton (Jordan A. Nash and Keira Chansa) are imaginative, playful children who live a happy life with their older brother, David (Reece Yates), and loving parents, Rose and Jack (Angelina Jolie and David Oyelowo). Peter and David like to pretend that they’re battling pirates on the open seas, inspired in part by their miniature ship builder father. Alice occasionally joins in the boys’ fun, but also likes to throw fancy tea parties for all of her plush and imaginary friends in the front yard. David is about to be sent away to a posh boarding school at the insistence of his snobby aunt, Eleanor (Anna Chancellor), but before that can happen a life altering tragedy changes the complexion of their family forever. The children are faced with an important decision: whether to grow up or retreat further into the fantasy worlds they’ve created.

Come Away is a fresh new take on traditional origin stories combined with an intriguing “what if” scenario. Pulling inspiration from, but never beholden to Peter Pan and Alice in Wonderland, Come Away (which shouldn’t be confused with Come From Away or the horror movie Come Play from a couple of weeks ago) is both creative and unusually downtrodden for a children’s fantasy. Some could say that it’s not much more than another unnecessarily gritty reboot of beloved characters that don’t need tortured origin stories, but that’s also what makes it such a captivating and moving story. Purists will likely chomp at the bit to tear it apart – and some already have, tearing the film down before its proper release over the casting of black children in traditionally whitewashed roles – but it’s very clear that Chapman and screenwriter Marissa Kate Goodhill hold the works of J.M. Barrie and Lewis Carroll close to their hearts and in high regard. They love these stories and characters enough to take them on new, interlocking adventures and personal journeys while remaining true to their spirit.

The actual depiction of the tragedy that sends Come Away’s plot into motion is somewhat awkwardly handled from a staging standpoint, but what matters more is where Chapman (who has an animation background and co-directed Pixar’s Brave) and Goodhill go from that point. The children are plagued by guilt, but their parents are even bigger emotional wrecks. Rose’s already contentious relationship with her disapproving sister becomes even more strained, and Jack falls back on a dangerous gambling addiction that was once firmly behind him (a subplot that allows for a nice extended cameo from Michael Caine as a veteran card shark). The children work hard to find ways of resolving the family’s pain, but eventually they have to learn that their keys to happiness might differ from those of their parents. 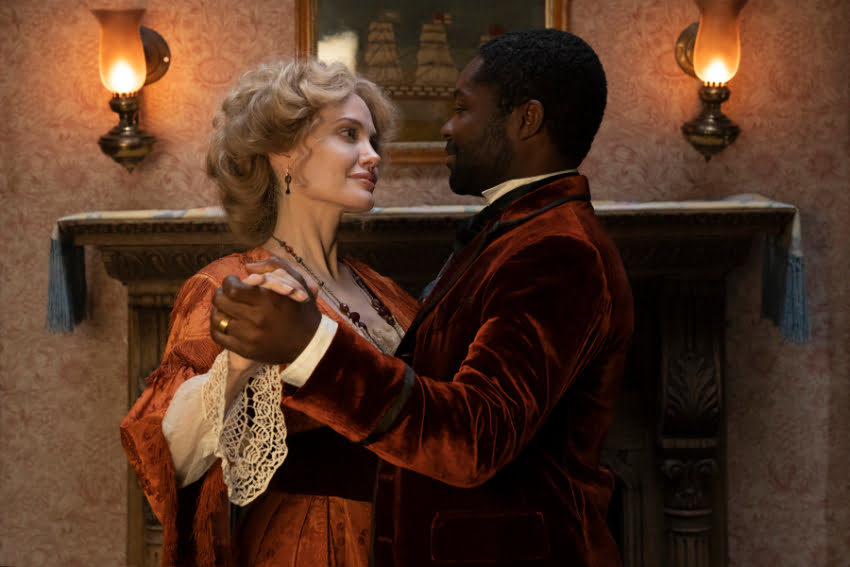 Outside of some occasional pretend swashbuckling and a brief dalliance through Wonderland, Come Away takes a realistic and grounded approach. It’s a period piece where the beautiful countryside hides repressed darkness, and the cities are so grimy that danger is out in the open. It might be a letdown to anyone who sees Come Away hoping for dazzling set pieces, but the script is fun enough in a connect-the-dots sort of way that keeps things interesting. Along their quests, the kids run into surrogates for the Red Queen, Mad Hatter, the Lost Boys, Tinkerbell, Captain Hook, and the White Rabbit, and in a novel subverting of expectations, the “fictional” characters from the classical stories are sometimes amalgamations of more than one person in the film.

While most of Come Away deals with children trying to make sense of very adult feelings at a young age (with the overarching story being told to children at bedtime by an older Alice, played by Gugu Mbatha-Raw), a lot of space is given to the complicated grief of the parents. Jolie is particularly wonderful as a woman left in a state of shock; one that isn’t helped by a sister who constantly derides Jack as being a low class husband that isn’t worthy of their family. Oyelowo has a more standardly written role of a gentle soul with an addiction that threatens the family’s well being and safety, but he’s still very good in the part. The film gets most of its emotional weight from very good performances by young stars Chansa, Yates, and Nash, but the veteran members of the cast provide ample and assured support.

On the whole, the updated mythologies in Come Away are more interesting and clever than fully successful. Come Away feels like an ambitious effort where a first-time live action feature director and a first-time feature length screenwriter have bitten off a bit more than they can chew. While Chapman creates an assured sense of tone and pace (which is slow, but I happen to think it works), the direction and visuals outside of the film’s greater flights of fancy are often flat. Goodhill’s script also struggles to keep the story’s growing cast of characters, asides, and subplots confined to a single 90 minute film, leaving some more interesting plot points feeling underdeveloped. The editing is slightly overthought and fussy, most notably during a sequence that unnecessarily cuts back and forth between a conversation amongst the Lost Boys and a separate character with no investment to the same scene suffering through a panic attack induced breakdown. And while Come Away has something muddled to say about class distinctions, it curiously doesn’t want to talk about how the race, family background, and privilege level of the children factors into their fantasies and real world interactions.

In spite of these storytelling jitters, I still find Come Away commendable and endearing. Many kids will likely find this sad and slow, and most adults will wonder what happened to their beloved childhood classics. If a viewer can put those things out of their mind and approach Come Away on its own unique, downbeat terms – which closes thoughtfully on a quote from a different sort of classic by William Butler Yeats – an impression will be left. For all of its sadness and faults, Come Away stands as proof as to why everyone young or old needs a Neverland or Wonderland of their own.

Come Away is available to buy on digital starting Friday, November 13, 2020 (English language only). It is available on DVD, Blu-Ray, and VOD (in both French and English) starting Tuesday, December 8.

[…] A daring and gutsy contemplation of family bonds and loss that dares to rewrite two of history’s most beloved children’s stories of all time, director Brenda Chapman’s Come Away might be too bleak and heady for many kids and too fantastical for cynical adults. But for anyone who can find a sweet spot between those settings and has no qualms about Chapman’s literary influences being vastly rewritten is in for a genuine treat and one of the most original (if admittedly imperfect) films of the year. Andrew Parker, The Gate […]

[…] A daring and gutsy contemplation of family bonds and loss that dares to rewrite two of history’s most beloved children’s stories of all time, director Brenda Chapman’s Come Away might be too bleak and heady for many kids and too fantastical for cynical adults. But for anyone who can find a sweet spot between those settings and has no qualms about Chapman’s literary influences being vastly rewritten is in for a genuine treat and one of the most original (if admittedly imperfect) films of the year. Andrew Parker, The Gate […]