One of the most layered, best performed, technically complex, and thoroughly convincing dramas of the year, director and co-writer Darius Marder’s Sound of Metal is an absolute powerhouse of a film. An intense, fully realized, and thoroughly believable reflection on disability, Sound of Metal is the rare type of film that’s abrasive and empathetic at the same time. Boasting one of the best leading performances of the year from Riz Ahmed and one of the finest on screen depictions of fraught recovery processes – both physically and mentally – Sound of Metal is the definition of unforgettable and original.

Ruben Stone (Ahmed) plays drums in a two-piece doom metal band alongside his partner of four years, Lou (Olivia Cooke). They aren’t making tons of cash, but they love spending time and producing art together. Right before soundcheck during one of their tour stops, Ruben’s hearing rapidly starts to decline, necessitating an emergency trip to see a specialist. He’s told that his hearing loss won’t improve, and that it’s imperative for Ruben to preserve what little hearing he has left. The news leaves Ruben shattered and frantic. Lou thinks they should postpone the remainder of the tour, but Ruben insists they press on so he can afford to get costly cochlear implants. Ruben’s mania not only threatens his relationship with Lou, but also his four years of sobriety as a recovering heroin addict. Lou eventually convinces her reluctant love to spend some time alone in a rural sober community for deaf people, but like many addicts Ruben is so wound up and focused on making things right that the program might not stick.

The premise of Sound of Metal has outstanding dramatic potential on its own, but Marder’s approach doesn’t pull any punches. While there are moments where Ruben is kind, gentle, and loving, there are just as many where the character seems determined to push everyone away so he can go right back to getting high. He lies, makes terrible choices, and the solutions he desperately searches for are often temporary patches on larger problems. There’s no guarantee that cochlear implants will allow Ruben to return to work and put his racing mind at ease, but he’s so focused on his newfound disability that he’s forgetting to remember that his sobriety is a far more tenuous situation. Marder never puts Ruben directly into cliched situations where drugs will be readily available and in front of him at any point during Sound of Metal, but the tension comes from always believing that the main character is always one step or crisis away from running away and going on a bender that could kill him.

The script from brothers Darius and Abraham Marder (with a partial story credit for Derek Cianfrance, who collaborated with the Sound of Metal director on the screenplay for The Place Beyond the Pines) approaches deafness and addiction as competing, yet interlocked and exasperating disabilities that are equally frightening and life altering. They give their actors plenty of character and depth to pull from, with Cooke delivering a powerful depiction of an anguished person watching a loved one mentally slip away before their eyes, and Paul Raci making a huge impression as the stern, but understanding leader of the recovery centre. But it’s Ahmed’s tour-de-force leading performance that plugs into the Marders’ material and amplifies it tenfold.

Sporting bleach blonde hair and some dubious tattoo choices all over his body (most notably “Please Kill Me” scrawled across the chest as if it were a perpetual plea for help), Ahmed fully transforms into Ruben. In previous efforts like Ill Manors, Nightcrawler, and most recently as a different kind of musician dealing with sudden onset disability in the more personal Mogul Mowgli, Ahmed displays a preternatural ability to channel the energy of characters whose every raw nerve is on display for all to see. It’s a performance of unfathomable emotional pain, but one where the actor and his director take great care in illustrating in fine detail exactly where this torment is coming from and taking the character to places where he might eventually see a light at the end of the tunnel that isn’t an oncoming train. It’s a careful and effortlessly studied performance, built on equal parts nervous energy and empathy for a likable, but misguided and desperate person who’s sometimes driven to self-destructive extremes. Even when Ruben finds some solace and acceptance within this deaf community – particularly in moments where he gets to interact with children at a nearby school – Ahmed never loses sight of the character’s desire to fix problems as soon as possible and at any cost, another nice touch that will be immediately recognizable to anyone who has dealt with the effects of addiction themselves or within their families.

The cinematography from Daniel Bouquet is stunning, but it’s almost used as a supplement to the unique and thoughtful sound design. Sound of Metal is a film that can be admired in three different ways that change the complexion of the narrative and its characters the more times one watches it. It’s excellent enough when viewed on a screen under normal home or theatre circumstances, but Sound of Metal is also a cinematic experience that benefits from wearing headphones or turning the sound off entirely. Marder and his crew want to do everything they possibly can to place the viewer firmly into Ruben’s shoes, using silence and inaudible audio to their utmost advantage. With headphones on (especially those of the noise cancelling variety), these sonic landscapes and frightening situations are even more disorienting and realistic. In a progressive and inclusive move, Sound of Metal comes with the benefit of open captioning, meaning the narrative can also be understood in complete silence. In a lesser filmmaker’s hand, the sound design could’ve been dismissed as a gimmick, but here the captioning and distortion is part of the film’s intricately constructed framework. In a year when big budget blockbusters are in short supply, it would be a travesty if Sound of Metal doesn’t pick up Oscars in both of the awards show’s audio categories.

Sound of Metal is a film that runs confidently along the razor’s edge in its depiction of trauma and recovery. When an addict is presented with setbacks that threaten their well being or comfort level, they tend to run back into the arms of their demons worse than ever. Addicts often see these trying moments in life as situational, ignoring any other obvious stressors that could compound the situation. Even if a recovering addict doesn’t fully relapse, they need the high they can get from solving all their problems at once, fearing that they’ll fall apart otherwise. When the newfound stressor in question happens to be another form of disability (and make no mistake: addiction IS a disability), those anxieties increase exponentially. Those are the kind of complicated, layered anxieties that are rarely seen in films, making Sound of Metal all the more revelatory.

Sound of Metal opens in select cinemas across Canada on Friday, November 20, 2020. If seeing a film in theatres, please take all necessary precautions. Wear a mask, practice social distancing, and stay home if feeling ill. In Toronto, Sound of Metal can be streamed at home through digital TIFF Bell Lightbox the same day. It will also be available on vod starting Friday, December 4. 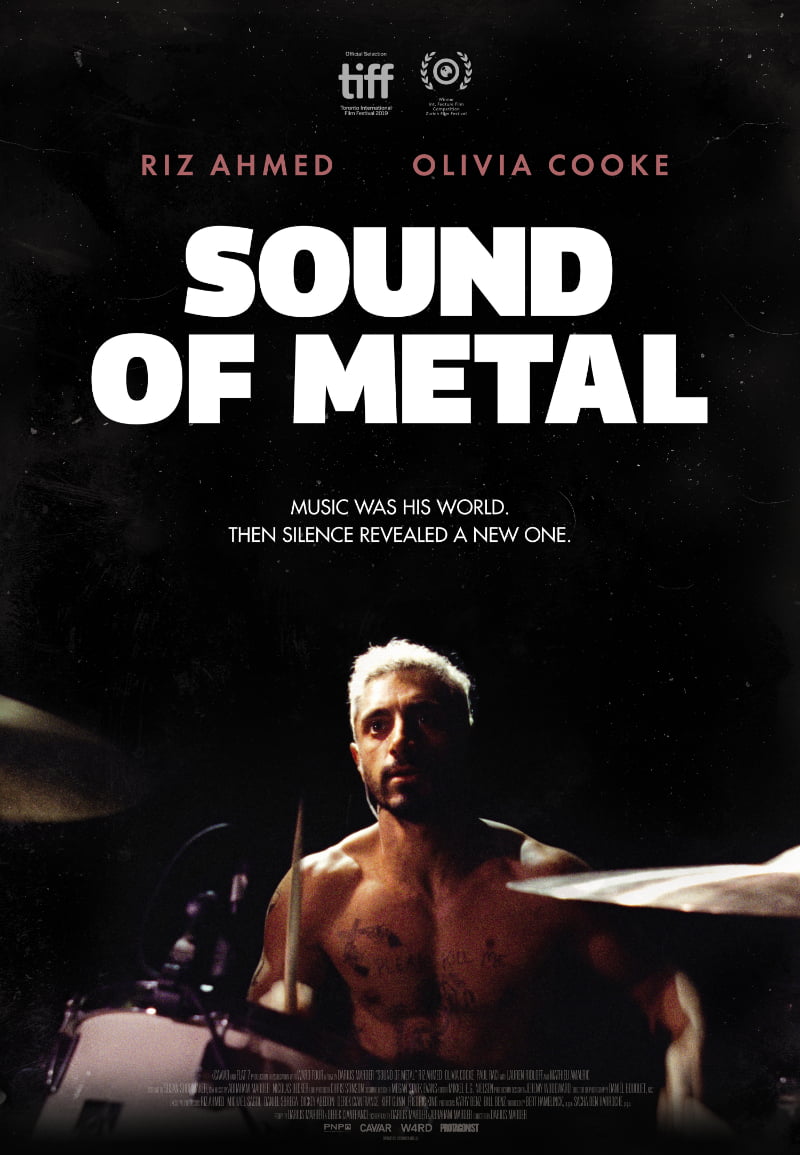