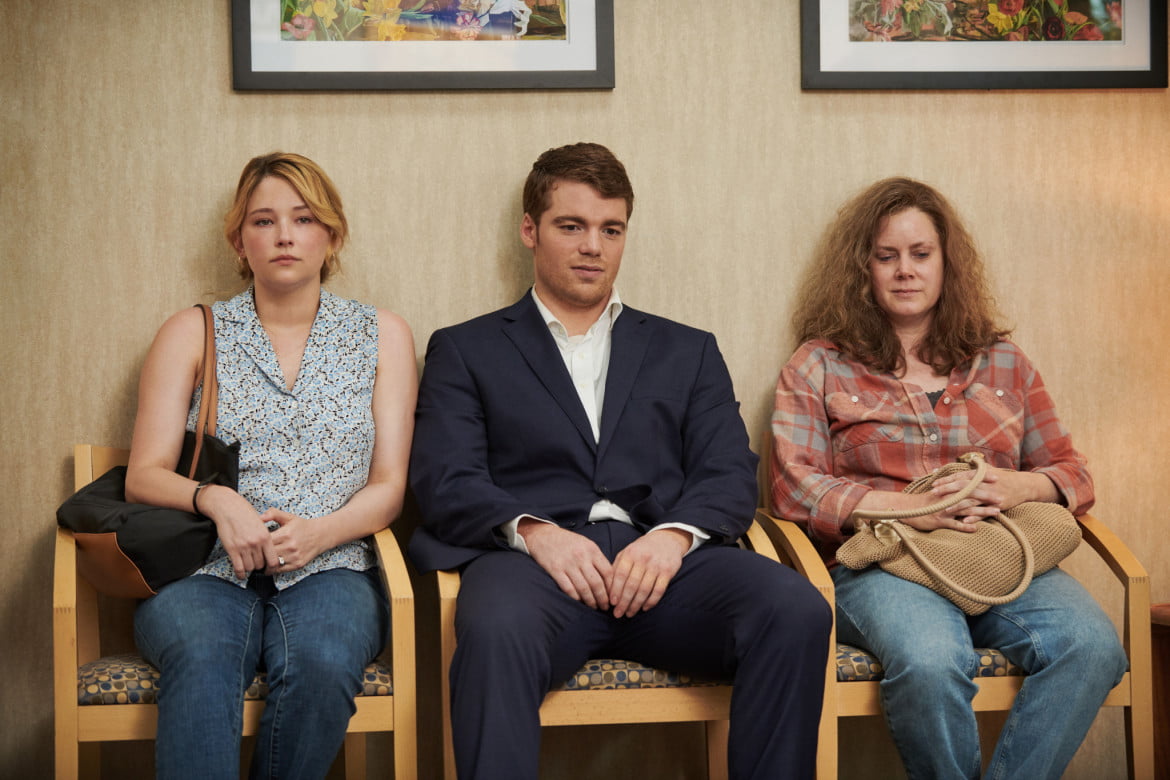 Hillbilly Elegy, director Ron Howard’s latest and most blatant stab at dramatic Oscar glory in a decade, is an objectionable, polished, sanitized take on important subject matter. An adaptation of J.D. Vance’s memoirs that throws subtlety and complexity to the wind in favour of empty platitudes about family needing to stick together, Hillbilly Elegy is ostensibly a true story told in the fakest, most insulting fashion possible. If it were made for the right reasons, Hillbilly Elegy would be a reflection of a specific, underrepresented segment of American society. Instead, all that’s apparent are Hollywood types eagerly awaiting their own reflections in awards trophies. It’s a “down home” film without a shred of humility and only scattered flashes of humanity.

J.D., played by Gabriel Basso as an adult in 2011 and Owen Asztalos as a teen in the late 90s, has been forced into reflecting upon the complicated relationship he shares with his opioid addicted mother, Beverly (Amy Adams). Raised in relative poverty among the hills along the Ohio and Kentucky border, J.D. has risen above his upbringing to become an ivy league educated law student. On the eve of a make or break interview for an internship, J.D. is called back home because Beverly has suffered another overdose. Beverly, who once worked as a nurse amongst other jobs, has no insurance, and money’s too tight for her son to send her into a proper rehab facility. His sister, Lindsay (a nicely understated Haley Bennett), would help if she didn’t have a large family of her own, and J.D. wishes that his tough-love Mawmaw (Glenn Close) were still around to alleviate an already tense situation.

Howard and screenwriter Vanessa Taylor (Hope Springs, Divergent, The Shape of Water) bounce back and forth between older J.D.’s harried struggles to sort out family matters so he can make his interview on time, and seminal events from his high school years that drove a wedge between the son and his mother. Both threads are believable, especially for anyone who has dealt with a parent, child, spouse, or loved one going through the physically and psychologically debilitating impacts of addiction and mental illness. But Hillbilly Elegy isn’t interested in realistic human drama. Howard is more invested in making sure that Hillbilly Elegy is a glossy, dumbed down melodrama that’s easier to take than the truth. It’s a movie that plays to all of Howard’s worst and most criticized impulses; the sort of film that could only move people in dangerous levels of denial or someone who hasn’t been touched by such tragedies.

While relatively fresh faced actors Basso and Asztalos do a fine job of getting to the heart of J.D.’s repressed rage, love, and conflict, Hillbilly Elegy always treats Vance like he’s a supporting character in his own life. Very rarely do the leading performers get a chance to figure things out for themselves because the side characters – most of whom are played by vastly bigger names – are constantly telling the protagonist what needs to be done in no uncertain terms. Even adult J.D.’s girlfriend (Freida Pinto, in one of the most thankless roles of the year as the audience surrogate) is only on hand to provide the most gentle and least impactful moral support via the phone. Hillbilly Elegy is based on Vance’s story, but it’s a memoir that’s almost impossible to film as a star vehicle. Taylor’s rudimentary take on lower-middle-class America and Howard’s slavish devotion to cliche rob Vance’s story of almost all its agency and power, leaving behind a work that’s as preachy and entertaining as an Afterschool Special.

It’s not entirely the fault of big names Adams and Close that Hillbilly Elegy becomes less a story of fractured family bonds and the opioid crisis and more of a misguided melodrama that misses the point of the material entirely. For her part as the wisened, sassy grandmother, Close is quite good, offering a reasoned bit of levity and gravitas, despite always being costumed in oversized novelty sweatshirts designed to draw attention. Adams, while miscast and too glamorous in her character’s appearance to convincingly play an addict reaching bottom, is probably going along with Howard’s whims for the story. It’s a case where the performance itself is fine, but the instincts informing it are off by a mile. Both Close and Adams steamroll over the actors tasked with playing their grandchild and son, respectively (with Asztalos doing a better job of holding his own), but it’s not the fault of the actors being hired. 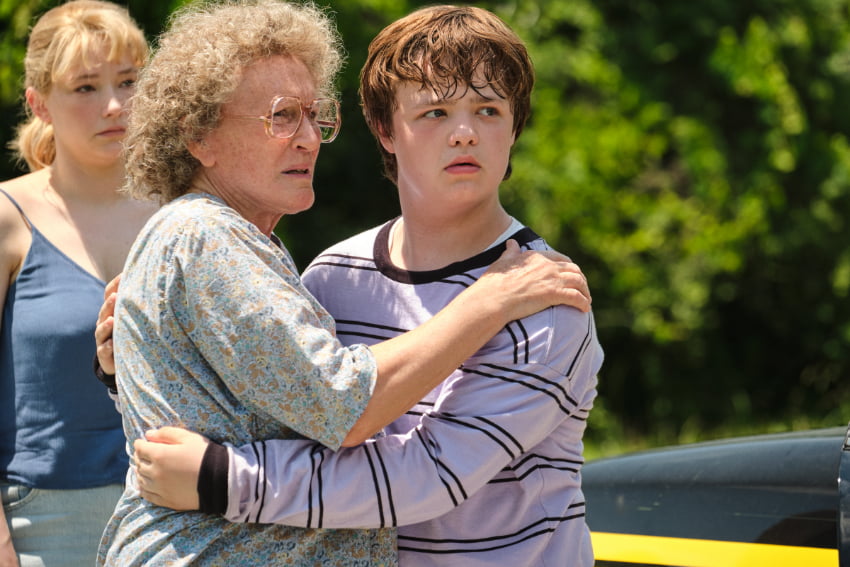 The fault lies in a dangerous misunderstanding of the material. Howard has stated that Hillbilly Elegy is meant to reflect upon the sort of Middle America he thinks he knows well, but if this is what the filmmaker remembers things being like, he must have amnesia. Hillbilly Elegy is the sort of movie made by someone who’s very comfortable in their life; a look into the darkness with a million watt searchlight rather than a more focused beam. Howard revels in placing his stars in dingy locations that are cleaner than these characters likely would’ve inhabited. He’s the type of filmmaker who distressingly finds nobility in human suffering, and makes crowd pleasing films out of life or death situations that should be taken seriously. Sometimes, Howard’s darker efforts work (Apollo 13, Backdraft, or Rebuilding Paradise, his documentary from earlier this year), while other similarly pitched films (the inexplicably lauded A Beautiful Mind, Far and Away, The Missing) land with a thud because he mistakes struggle for entertainment.

While many feel-good stories about overcoming adversity have to dwell on unpleasantness for the sake of uplift, Hillbilly Elegy comes with a dangerous and irresponsible message that’s impossible to overlook. From all the evidence given throughout Hillbilly Elegy, it’s clear that Beverly is an emotionally and physically abusive mother. J.D. tries to help Beverly, but her condition is beyond anything he can handle. Instead of making a film that seriously examines an adult child of abuse coming to terms with a parents’ demons and breaking away from a bad situation, Howard and Taylor have the gall to offer the empty message that “family is the only thing that means a goddamn.”

This is dangerous territory for a critic to get into, but as an adult who suffered through similar parental problems in their youth, I have to disagree wholeheartedly with that message. I don’t want to imprint my own experiences onto Hillbilly Elegy, nor do I want to pass judgment on these characters or their real life counterparts because there’s no perfect one-to-one equation to link the two. The problem with Hillbilly Elegy lies with the writer and director’s unconscious insistence that suffering has made J.D. into a better person and not a wreck of a human being who feels like all hope is gone.

When a main character in such a narrative is never given control over their situation for a single second, it suggests that abuse is a cycle that should never be unbroken because family is more important than psychological damage. Even when looking into the margins and beyond the character of J.D., this applies to nearly every backwoods stereotype that populates Hillbilly Elegy. Are they noble people with hopes and dreams that might go unfulfilled? Yes, with a few notable exceptions. Are these characters informed by their abuse, both physical and chemical? Yes. Are they defined by their abuse? They shouldn’t be, but Howard makes it that way because he doesn’t know how to portray these characters otherwise. All he offers up is a plea to help others who can’t help themselves, but without any suggestion of how to do it.

Howard doesn’t try to unpack the chemical and emotional abuses at the heart of Hillbilly Elegy. They exist entirely in a vacuum and only serve as a delivery system for histrionic hick cliches, and to give his actors something to pad out their Oscar and Golden Globe reels. What could’ve been a poignant examination of the ways screwed up families keep pulling people back into their orbit is instead just another misguided prestige project that’s good for keeping up appearances and little else of genuine use. 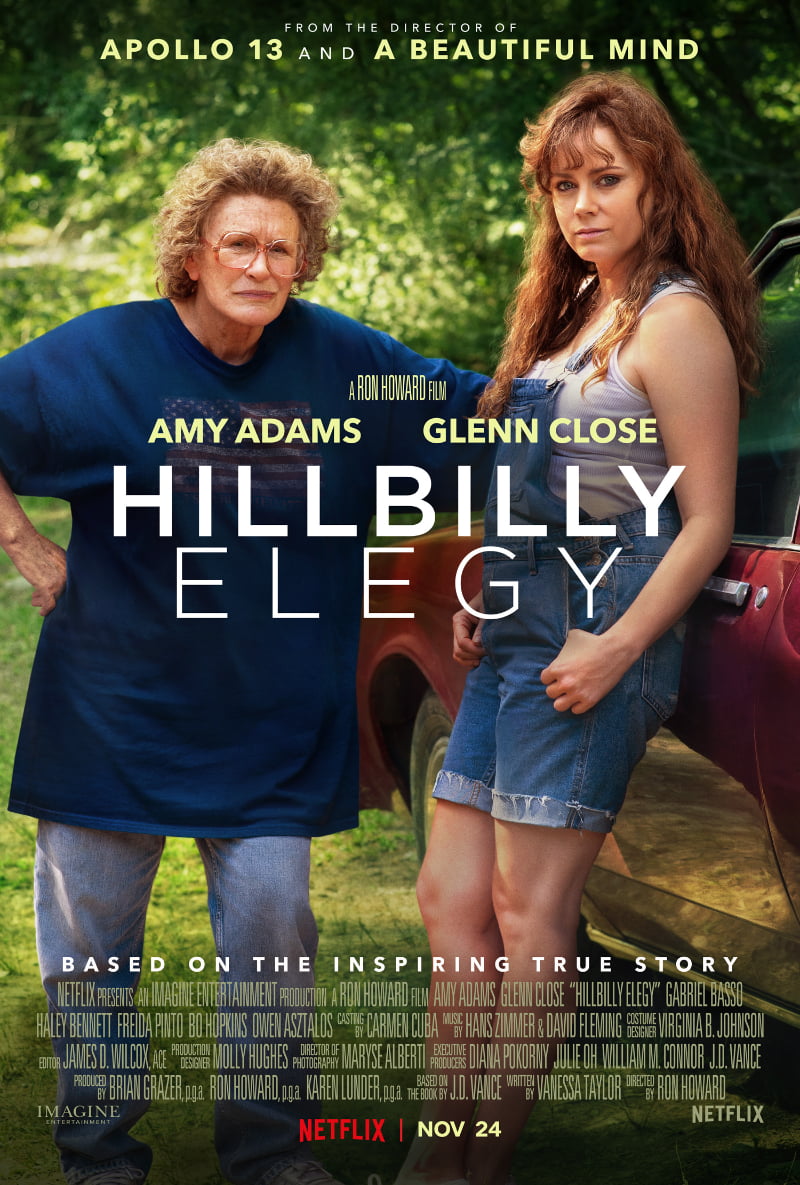