A noticeable comedown in quality from its already uneven predecessor, The Christmas Chronicles: Part 2 is a cheap and lazy sequel. Although Kurt Russell once again brings a lot of charm to the role of Santa Claus – with his partner, Goldie Hawn, doing the same as the jolly man’s missus – The Christmas Chronicles: Part 2 offers up a worse story, unconvincing visual effects, and some truly annoying supporting characters. A lot of the fun and infectious energy from the first film is missing here, making the obvious faults of this sequel all the harder to ignore and excuse,

Kate Pierce (Darby Camp), one of the young heroes who helped save Christmas in the first film alongside her older brother, Teddy (Judah Lewis), is suffering the holiday blues while on vacation with her mom (Kimberly Williams-Paisley) and potential new stepdad (Tyrese Gibson) in Acapulco. Still wounded from the death of her father, Kate would do anything to remove herself to a snowier, more seasonally appropriate location where there would be less interaction with her annoying stepbrother-in-waiting, Jack (Jahzir Bruno). Kate makes a Christmas wish to her old friend Santa, but the wish is overheard by Belsnickle (Julian Dennison), a disgraced elf who turned human and ran away from Santa’s village after breaking the secret elf code of conduct. Belsnickle needs Kate’s help to sneak back into Santa’s magical wonderland, since she comes from a long line of “true believers.” Belsnickle transports Kate and stowaway Jack to the North Pole, where Santa and Mrs. Claus are happy to welcome them for a visit until Belsnickle sets about getting his revenge and potentially destroying Christmas forever.

The first film employed a simplistic, well worn plot as a way to offer up some madecap seasonal fun. Teddy and Kate had to help Santa get Christmas back on course across one crazy, adventure packed night. The “one crazy night” plot is ditched here in favour of giving Kate and Jack equally dull missions (one involving the laziest writing motif of all, time travel) that will help them overcome their fears and sadness. Teddy is completely out of the adventures this time around, leaving Camp to play the sullen teen and Bruno to play the part of the precocious, asthmatic, allergic, and anxious youngster. The contentious dynamic between Kate and Teddy is sorely missed this time out because all of the heart and soul seems to have been drained from The Christmas Chronicles: Part 2.

Veteran blockbuster filmmaker Chris Columbus (Home Alone, Mrs. Doubtfire, the first couple of Harry Potter films) takes over directing and partial screenwriting duties with near disastrous results. Columbus (who served as a producer on the previous film) shows no desire to make The Christmas Chronicles: Part 2 into anything more than an effects driven sugar rush with such cloying, unforced sweetness that it could put diabetics into the hospital. Say what one will about the first film, but at least it had a certain degree of strangeness and go-for-broke energy that made for a cheesy, but entertaining experience. The Christmas Chronicles: Part 2 is far more cynical and listless in its goals, offering up a pointlessly overstuffed story that often gets in the way of the films’ numerous flashy, but uninspired set pieces. The Christmas Chronicles: Part 2 isn’t much of a film. It can be more easily classified as “content,” or more charitably as “a product.” Columbus sells whimsy by the sleigh-full without any reason to care for a stitch of it. 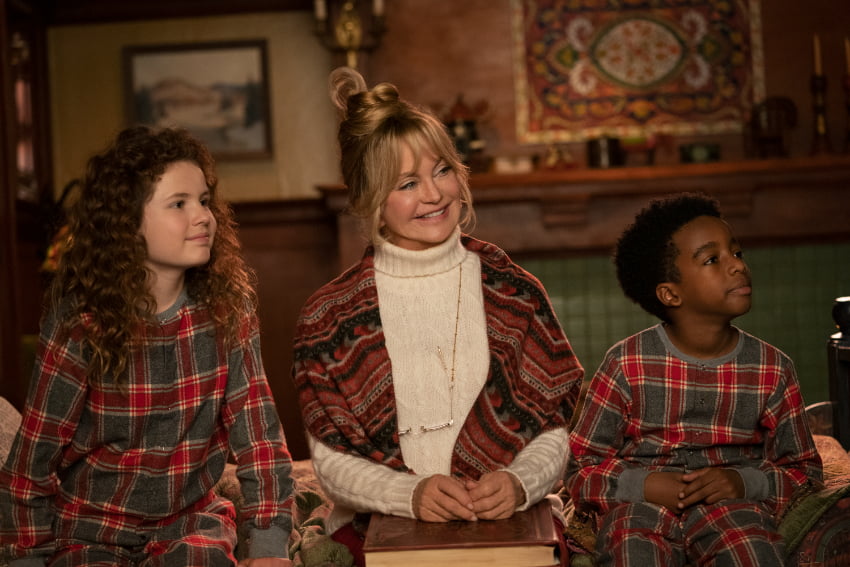 There’s not much to be said here for Kate’s character other than what’s already been established previously, and although the villainous Belsnickle is meant to be a reflection of the young woman’s backslide into unhappiness, it’s not an interesting dynamic. Kate is a blank slate, but Camp does her best. The usually reliable Dennison is tasked with creating something out of virtually nothing here, since the film doesn’t seem to care if Belsnickle learns the error of his ways or not. But the person I feel most sorry for is Bruno, who has to do exactly what the script tells him and plays an annoying, over-the-top amalgamation of nerdy, scaredy-cat cliches. In the first half of The Christmas Chronicles: Part 2, things come to a screeching, cringe-worthy halt whenever Jack takes over scenes like a wrecking ball. Bruno’s character is elevated slightly once he stops fearing everything and becomes somewhat heroic, but the damage has been done; not by the young actor – who I want to stress is not the problem here – but by Columbus’ awful writing and direction. Jack is written like he was created by someone who has never actually met a pre-teen and only knows what they should look and sound like from having overdosed on Chris Columbus movies. I really thought by now we would have computers capable of churning out this sort of hackwork.

Thank goodness for Russell and Hawn, who remain bright spots of cheer, warmth, and wit. They’ve both done better with (surprisingly) worse material than this before, and their chemistry and comedic timing remains impeccable in their first feature together since Overboard (not counting Hawn’s brief cameo at the end of the previous Christmas adventure). Hawn brings out the best in Bruno through their shared storyline, while Camp and Russell share the burden of largely carrying everything else. Mr. and Mrs. Claus have to be great with children, and Russell and Hawn are certainly in the giving spirit here. Without their considerable talents, The Christmas Chronicles: Part 2 would border on unwatchable. (Russell also bumps up the rating for this almost a full tick because it gives him the chance to partake in another outlandish and campy musical number, one of the highlights of the first film.)

But even with two solid and proven leads to work with, Columbus barely cares about his own incomprehensible plot, merely paying the dramatic and comedic beats cursory notice before plunging into a CGI hellhole of set pieces that look rushed and half finished. If one were to tell me that the effects houses that worked on The Christmas Chronicles: Part 2 struggled to complete their work due to the global pandemic, I would certainly believe it. In comparison to the first film – which had okay, but still not spectacular effects – The Christmas Chronicles: Part 2 looks distressingly cut rate, with far too many unconvincing flying sequences, poorly rendered animals, and dodgy looking green screen effects in seemingly rudimentary scenes. About the only visuals that work involve Santa’s elves going mad after being poisoned by Belsnickle, and that’s nearly undone by Columbus setting part of the chaos to “Who Let the Dogs Out,” in what might be the squarest and least timely gag in any movie this year.

Christmas is a square holiday that revolves around repetitive traditions to begin with, but Columbus isn’t even trying to match that low bar for yuletide merriment. Throughout The Christmas Chronicles: Part 2, minimum effort is given by everyone outside of the five leads. It’s a film that doesn’t care if it’s good or bad. It just cares that it exists and takes up space next to the tree, barely passable as background noise, but an overlong chore to sit through as a piece of entertainment. 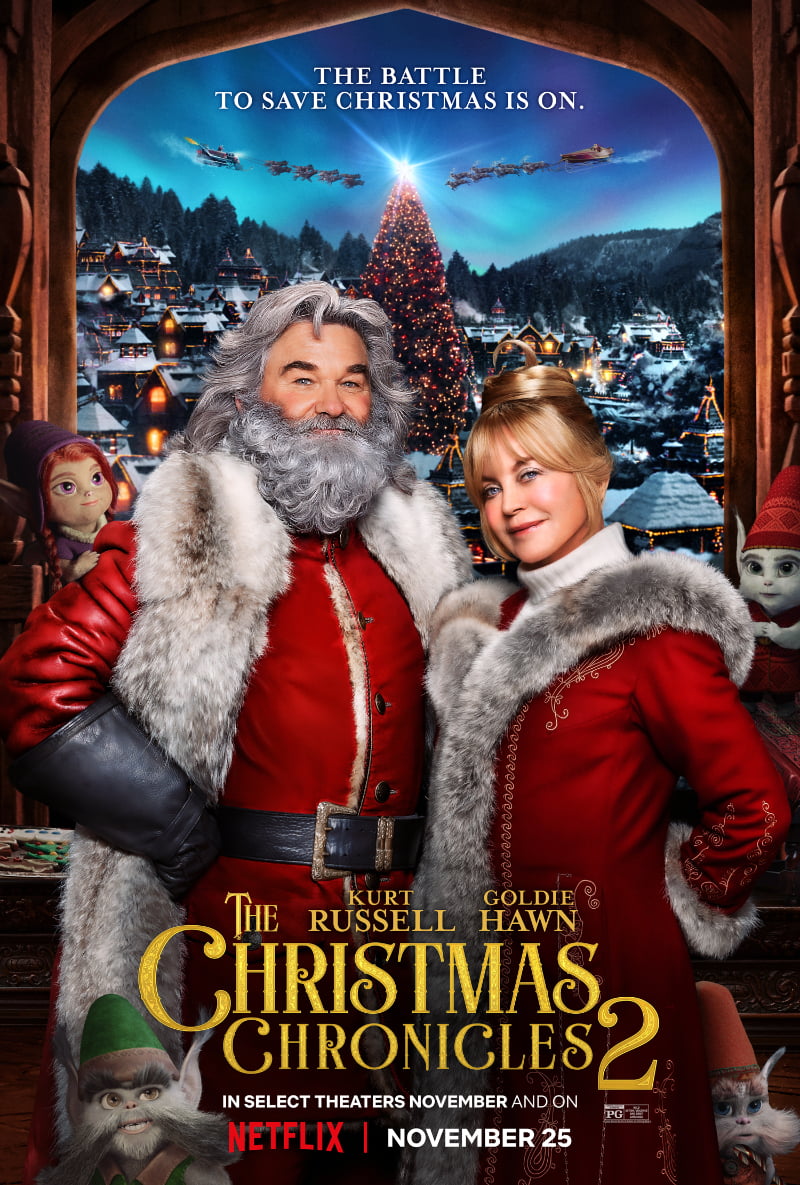