The Croods: A New Age | Review

An eye catching and frequently amusing bit of prehistoric fun for the whole family, The Croods: A New Age, might not be a necessary animated sequel, but at least it’s a decent one. After eight years of start-and-stop production (which included being outright cancelled at one point), story artist and first time feature director Joel Crawford’s follow-up tale about a prehistoric family searching for a new place to call home takes its characters in an emotionally familiar, but visually different direction. The Croods: A New Age won’t tax any viewers young or old, but it will offer them some gorgeous visuals, lighthearted chuckles, and gently relayed life lessons. It’s comfort food that mostly anyone could enjoy.

After learning in the first film that no family member is alone as long as they have each other, the titular clan continues their seemingly endless quest to find a place where they can settle down. Patriarch Grug (voiced by Nicolas Cage) is growing increasingly fearful that his daughter, Eep (Emma Stone), is secretly plotting to leave “the pack” and start a new life with her boyfriend, Guy (Ryan Reynolds). These fears aren’t put to rest when they meet The Bettermans – Phil (Peter Dinklage), Hope (Leslie Mann), and their daughter, Dawn (Kelly Marie Tran) – a more refined, less neanderthalic family that loves etiquette and creature comforts like elevators, mirrors, walls, showers, and panic rooms. The Bettermans actually raised Guy after his parents died in a tar pit (seen in the film’s unusually dark and out of place opening scene), and they’re thrilled to see him return. The Bettermans are less thrilled to see Grug, Ugga (Catherine Keener), and the rest of their family. Phil and Hope want Guy to stay forever and settle down with Dawn instead of Eep. And Grug is willing to agree if it means getting Guy out of Eep’s life for good and keeping his own family together.

The Croods: A New Age is strange because it stays true to the original characters – with all primary voice talents from the first film returning – but wildly changes their environment. The Croods was a playful and fantastical adventure that looked prehistoric: caves, lush forests, cliffs, that sort of thing. But something happened at Dreamworks during the family’s long-in-production second outing to the big screen: the Trolls films. Suddenly, The Croods: A New Age looks and moves more like the studio’s biggest recent successes. Gone are the greens, browns, and fire oranges. In its place are neons, fluorescents, and the most eye popping colours the animators can get their hands on. If the first film made an attempt to approximate the era in which the story takes place, The Croods: A New Age makes no such effort.

That approach is both for better and worse. The Croods: A New Age looks outstanding by any measurable metric, but it bears the fingerprints of studio execs trying to mould this sequel into something the original wasn’t. While the overall good natured silliness of the original is thankfully retained, The Croods: A New Age looks like a completely different film. The noticeable changes – which extends to a cavalcade of new, mythical beasts and a heavy reliance on classic pop songs by the likes of Spandau Ballet and The Partridge Family – take some getting used to, but the writing team (comprised of six credited people in total) manage to keep the newly redesigned clan on steady narrative ground. There might be a fresh coat of paint and a new sense of fantastical energy, but it still feels like a movie about The Croods.

The members of the voice cast sound like they’re all having a blast, and their characters have progressed as (cave)people, but never to an extent where they appear unrecognizable. Cage remains a perfect choice for playing a perpetually stressed out alpha male, and the actor is given a fixation with bananas to work with that nicely parallels the actor’s alpaca obsession in Color Out of Space. Stone and Reynolds are old hands when it comes to romantic comedies, so their loving and sometimes antagonistic chemistry remains a major highlight here. Keener gets to flit back and forth between being the family’s voice of reason and uniquely deadpan one liners. Clark Duke, as lunkhead brother Thunk (whose obsession with windows outstrips Grug’s with bananas as the film’s best running joke), and Cloris Leachman, as the family’s wig-wearing grandmother, get ample opportunity to shine. Stone also cultivates a charming friendship with Tran’s character, a young woman who’s finally getting in touch with her wild side. And Dinklage and Mann make for fine antagonists, striking the perfect blend of self-righteousness and condescension. As with the first film, the characters make The Croods: A New Age effortlessly delightful.

The Croods: A New Age doesn’t elevate the animated art form above its array of colours, the messages about class differences, sisterhood, meddling parents, and accepting others’ flaws aren’t different from any number of other animated movies, and sometimes everything feels fussy and stylized almost to the point of distraction. But those feel like minor complaints about a film that effectively gives viewers a good time. The characters are still worth following. The writing is sharp, with plenty of jokes and sight gags to keep both kids and adults reasonably entertained. Some impressionable kids might want to recreate a scene where Guy has to helplessly translate a mythical language composed of repeated slaps to the face, but that’s the worst that can really be said about The Croods: A New Age. It’s a slight, but still memorably fun time.

The Croods: A New Age opens in select theatres on Wednesday, November 25, 2020. If seeing a film in cinemas, please take all necessary precautions. Wear a mask, practice social distancing, and stay home if feeling ill. 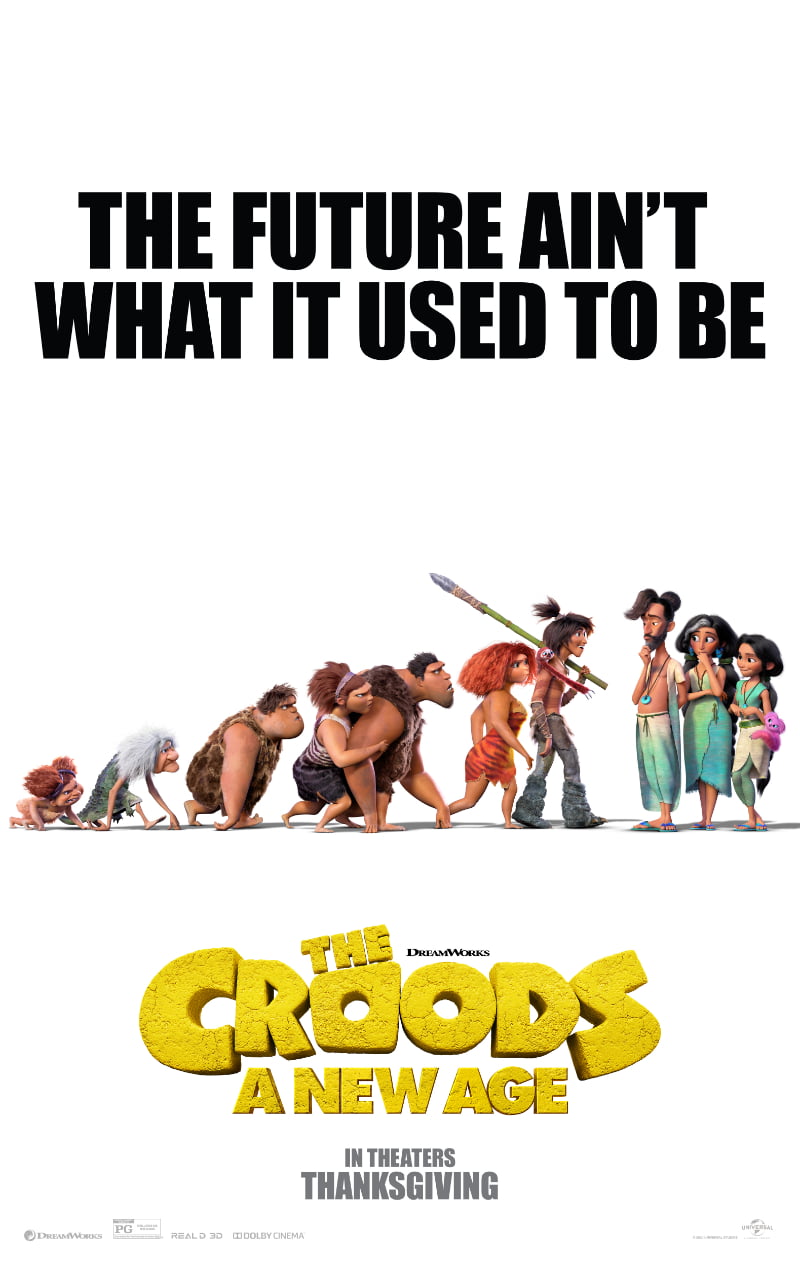 I enjoyed the first film a lot and rewatched it when I got the DVD.