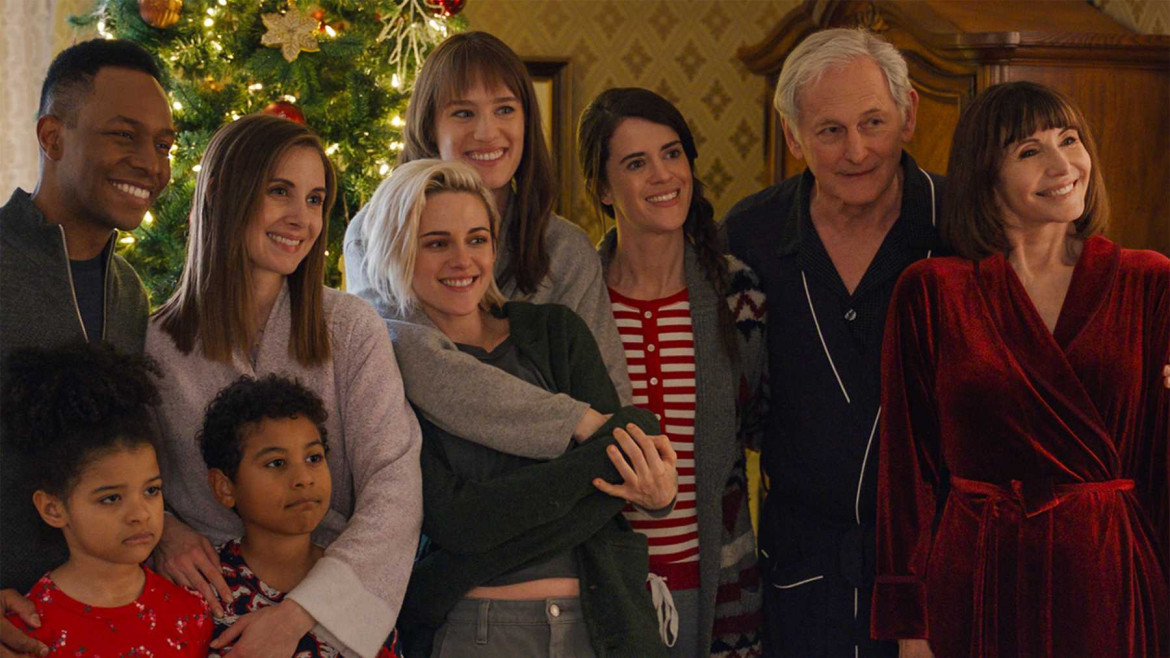 It wouldn’t be the holidays without a dysfunctional family comedy featuring an all star cast, and even though 2020 has been littered with some of the worst news and events in human history, at least Happiest Season has come along to comfortably and amusingly fill that void towards the end of the year. A definite winner in a hit-or-miss genre, Happiest Season delivers a variation on an overly familiar plot that’s refreshing in its queer focal point. And even when Happiest Season isn’t doing anything new in terms of its characters or plotting, it never does anything wrong, either. That might sound like faint praise, but I say that in all earnestness. It’s unfathomable how so many films over the years have found ways to screw up such a chip-shot premise, which means this will give viewers plenty of reason to celebrate (socially distanced, of course).

Abby (Kristen Stewart) hasn’t been a fan of Christmas since her mom and dad passed away when she was nineteen. Harper (Mackenzie Davis), Abby’s long term girlfriend, adores Christmas and the yearly family parties it brings. Harper thinks that she can get Abby into the holiday spirit by taking a five day trip to her parents’ house. Abby, who was planning to propose to Harper over the holidays and bought the ring to prove it, agrees and takes a cautiously optimistic approach to Christmas this year. But on their way out of the city, Harper lets slip that she hasn’t told her conservative folks or either of her siblings that she’s gay. Abby gives in to Harper’s plea to keep their romantic relationship under wraps over the next several days, but family dysfunction, long simmering sibling rivalries, and comedic misunderstandings will test the couples’ strength.

Upon arriving at the home of mom, Tipper (Mary Steenburgen), and dad, Ted (Victor Garber), Abby sees why Harper is so gunshy when it comes to leaving the closet. Ted is running for mayor in a traditionally conservative small town, and social media obsessed perfectionist Tipper works overtime to paint her family as a picture of domestic nirvana. Harper is locked into a battle of wills and words with her older sister Sloane (Alison Brie), a once promising law student with a bratty set of twins, an unhappy marriage, and glorified gift basket business. Then there’s the matter of Jane (Mary Holland, who also serves as co-writer), the handy, but high-strung and overly eager middle sister that no one seems to like very much.

Happiest Season is the latest directorial effort from performer and filmmaker Clea DuVall, and it’s an assured balance between convention and ingenuity. It’s the sort of film that thrives on the standard genre beats audiences expect from a holiday movie (romance, cringe-humour, increasing frustration among family members), but Happiest Season also never forgets to create memorable characters, hilarious jokes, and an appropriate amount of believable dramatic conflict to keep things interesting. One can tell that Happiest Season is an ensemble piece made by people who understand how actors work and what they need to elevate and enhance the material that they’re given. Writers DuVall and Holland provide their cast with a solid bedrock, but also allow them plenty of room to make these characters their own. 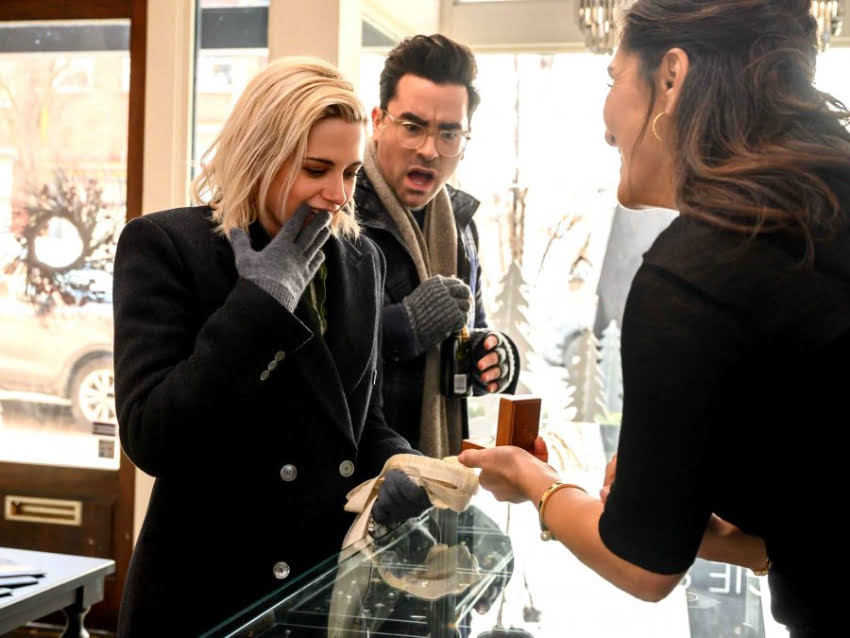 Stewart might seem like an odd choice to anchor a seasonal rom-com, but her natural charisma and unparalleled ability to seem annoyed by everyone and everything around her proves to be a perfect fit. Stewart also gets ample opportunity to stretch her comedic chops, offering up a side to the performer that’s underrated and underutilized by other filmmakers. The romantic and dramatic chemistry between Stewart and Davis (a performer who really should be an A-list megastar by now) is solid and expertly staged by DuVall, who never shies away from hard questions about their relationship. How long can Abby survive being put back in the closet, and at what point will it be too late for Harper to come out to her family and minimize the damage to their relationship? These are the questions that DuVall uses as the backbone of her story, and the leads find creative ways to make the film silly or heartbreaking depending on whatever’s called for in the moment.

Every other character in Happiest Season is interesting in their own respect, but in more familiar ways to other holiday classics. Garber has some nice moments as the oblivious, self-centred politician father who can’t shut off his own ego and enjoy time with the family. Steenburgen has one of her best roles in ages as a woman who brags about the family’s success while simultaneously heaping shade on top of anything she finds remotely objectionable. Steenburgen has competition in the “unwitting villain” department here from Brie. Sloane is just as big of a passive aggressive jerk as Tipper, but at least the audience can see the roots of her jealous, competitive tendencies. Holland steals every scene she’s in with a delightful degree of weirdness and energy, while Aubrey Plaza has a nice little role as one of Harper’s exes that informs the story’s core relationship with great poignancy. Happiest Season also doesn’t forget to give Abby a flamboyantly gay bestie that she can talk to on the phone whenever things get overwhelming, played here by a typically great Dan Levy. Most of the characters in Happiest Season are born from tried and true archetypes, but they’re employed in service of a story variation that hasn’t been attempted before, making their well worn quirks novel once again.

DuVall makes Happiest Season into the kind of raucous comedy one might expect – complete with Abby getting trapped in a literal closet with an errant Roomba, and run-ins with over-zealous mall rent-a-cops, and what I can only describe as “reindeer bondage” – but it’s the underlying seriousness of the situation that gives the film a lot more weight. Abby’s distress over Harper’s hiding of the truth is only part of her troubles. The overall cruelty and competitiveness among Harper’s immediate family members makes things worse, with the trip showing Abby a side of her lover that makes her appear like a different person when plunked back into the small town life once left behind. Harper falls back on old, closeted habits, and that breaks Abby’s heart just as much as the lies to her parents. Happiest Season wisely acknowledges the underlying mean streak of many of the characters without excusing it. Like many holiday comedies, Happiest Season is built around a person who has to deal with mounting embarrassments, but DuVall makes it clear that Abby isn’t her own worst enemy. For once in the genre, it’s everyone else that’s the problem.

Not everything works in Happiest Season. There’s some unnecessary padding involving Harper’s first boyfriend that isn’t as interesting as the stuff involving Plaza. A character’s third-act moral about-face feels all too sudden to be believable, while another interesting participant in the story is dropped rather unceremoniously and without a proper send-off. Minor hiccups and formulaic plot points aside, Happiest Season still manages to pull most of its moving parts together for the best ending possible, one that will leave viewers happy and offers a pleasingly bittersweet undercurrent for some of its characters. In a year where many people won’t be getting together for the holidays, Happiest Season will both scratch that yuletide movie itch and make some feel grateful that they don’t have to spend time with problematic family members.

Happiest Season is available on VOD in Canada starting Thursday, November 26, 2020. It is available in the U.S. on Hulu. 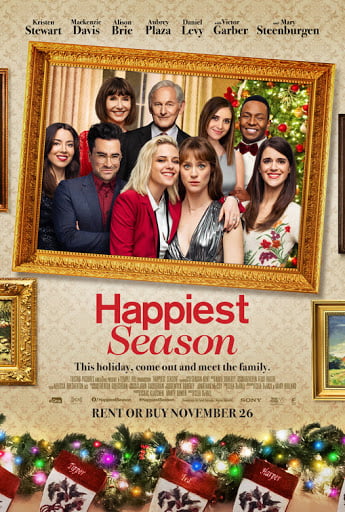