Let Them All Talk | Review

Let Them All Talk is a witty and unpretentious story about overcompensating and pretentious people. A bit of a departure for director Steven Soderbergh, Let Them All Talk feels like a cross between a classical comedy of errors from a bygone era and a highly improvised, post-modern hangout movie. It’s a fun and uniquely intimate production where viewers get to spend time with a handful of exceptional actors effortlessly playing off one another. In any other year, Let Them All Talk might be dismissed as one of Soderbergh’s more minor works, but in 2020 it feels as cozy as curling up in bed with some old favourites, and considering that the film is going straight to streaming in North America, I’d say the filmmaker and his cast have accomplished their mission.

Pulitzer Prize Winning novelist Alice Hughes (Meryl Streep) has won yet another prestigious literary award. The award ceremony is in England, but aging and neurotic Alice can’t fly there to accept. Alice convinces her new literary agent, Karen (Gemma Chan), to get her publisher to spring for first class accommodations aboard the Queen Elizabeth II, shipping out from New York City. Alice also demands accomodations for her doting nephew and personal assistant, Tyler (Lucas Hedges), and two close friends that she hasn’t seen or spoken to in ages – Susan (Dianne Wiest), a harried and stressed out family woman, and Roberta (Candice Bergen), a fun loving, hard living retail worker left devastated by divorce. Karen’s employers at the literary agency agree to the pricey demands on the condition that the agent secretly observes Alice on the passage, because the writer might be working on a sequel to her most popular and award winning novel (one that the author can’t stand talking about).

Working from and riffing off a script provided by award winning short story author Deborah Eisenberg, Soderbergh weaves a tale straight out of mid-twentieth century high society comedies and gives it a modern sheen and sensibility. Shot last year aboard the actual Queen Elizabeth II with a skeleton crew (Soderbergh acts as his own cinematographer) and utilizing only the ship’s natural lighting, Let Them All Talk breathes new life into an all but dead style of dramedy. Instead of watching a standard clashing of the characters’ widely varied personalities unfold in expected, preordained fashion, Soderbergh’s refined and low-fi fly-on-the-wall style makes Let Them All Talk feel more realistic and less stagey than it might have otherwise. It’s the type of material that one could easily see unfolding on stage to lesser results, but works better with the benefit of having a filmmaker who understands scope and visual tone.

While Soderbergh can create charming films whenever he feels like doing so, Let Them All Talk is a genuine outlier in his career. Soderbergh is a filmmaker who has spent most of his career analyzing the inner workings of specific systems, regardless of the genre he found himself dabbling in. Whether it was the war on drugs, pandemic response, heist planning, class action lawsuits, professional sports, strip clubs, or the foundations of the Communist party, Soderbergh generally gravitates towards material that benefits from his detail oriented perspective. Let Them All Talk certainly has detailed characters and verbose dialogue, but the tone and tenor is far more relaxed this time out. There’s no greater system for Soderbergh to hang his hat on here, making Let Them All Talk appear simultaneously like his most conventional film to date and his most intimate and stylistically unencumbered effort since Sex, Lies, and Videotape. It’s almost experimental in Soderbergh’s blatant deviation from his own established formula, but just as pleasing as more entertaining efforts like The Limey, Magic Mike, and the Ocean’s trilogy.

Eisenberg’s material is built around well worn and established character types falling into classical misunderstandings and copping to longstanding personal grudges. Alice has love for her friends, but also condescends to them and delivers haughty dismissals of anything she feels is beneath her (evidenced best via a subplot involving a mainstream bestselling mystery author, played nicely and warmly by Daniel Algrant, aboard the same ship). Susan tries to remain a peacekeeper despite legal troubles tearing her family apart back home. Roberta is desperate to land a sugar daddy and is quietly resentful towards Alice for co-opting her divorce for her biggest success. Tyler is tasked with keeping Roberta and Susan occupied while Alice is busy “trying to catch lightning in a bottle for a second time,” but the eager young man would rather be secretly flirting and developing a bond with the older Karen.

Streep, Bergen, and Wiest have comfortable chemistry and wonderful shorthand that makes one truly believe these characters have been falling in and out of friendship across decades. Streep is having some cheeky fun poking at the various stereotypes associated with authors who think they’re literary royalty. Streep’s aloof, self-obsession rhymes nicely with Bergen’s impassioned, scene stealing turn as a woman who (somewhat rightfully) believes her friend owes her something. Even though Bergen spends more time playing board games and kvetching with Wiest (who sadly draws the narrative short straw here, but is still great) or asking the adorably dopey Hedges to look into the backgrounds of potential suitors, Let Them All Talk builds tension on the knowledge that Alice and Roberta will have to have it out once and for all during the trip. When that moment finally arrives at the film’s most bittersweet moment, Streep and Bergen offer up a masterclass in how to keep such an obviously written and constructed scene subtle and grounded.

The emotional showdown between Bergen and Streep couldn’t come at a better time in the film, as Let Them All Talk starts dragging its anchor heading into the final act. It becomes clear that Wiest won’t have much more to do that be a mirror for the other characters, and Soderbergh wastes some good chemistry shared by Chan and Hedges, tying up their angle in a fashion that’s both realistic and narratively thin in its execution. Let Them All Talk also trots out a subtly telegraphed big reveal that lands weakly. The transition from light comedy into more serious territory isn’t a smooth one, but at least it’s not a conclusion that betrays the characters or what makes them unique and fun to be around. It stops being a bit of traditional Hollywood entertainment and suddenly becomes an approximation of a classic Steven Soderbergh movie. Wonky final act aside, Let Them All Talk remains one of the filmmakers most breezily fun efforts.

Let Them All Talk is available to stream on Crave in Canada and HBO Max in the United States starting on Thursday, December 10, 2020. 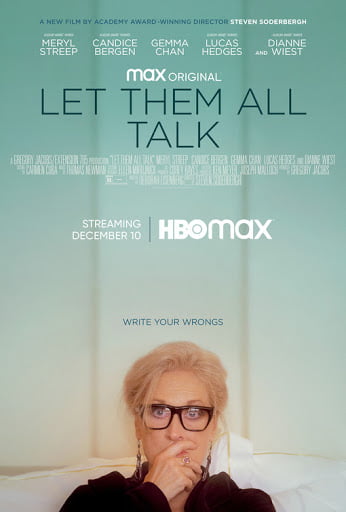