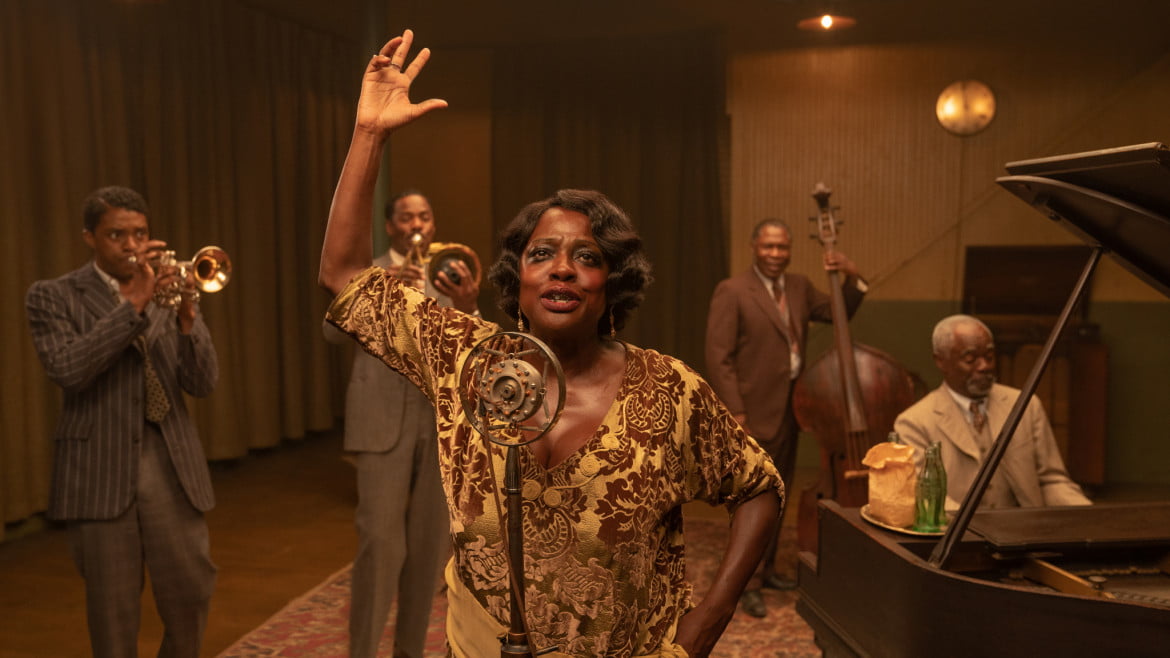 An electrifying and intimate look at cultural shifts within the black community at the height of Jim Crow and a mass exodus from the American south, Ma Rainey’s Black Bottom bristles with intensity, anguish, and above all else, confidence. It’s a rare instance where a film based on a play – in this case, the late August Wilson’s 1984 effort of the same name, the second entry into his ten show “Century” cycle – doesn’t try to hide its roots. While that sense of stageiness sometimes backfires for filmmakers adapting plays to the screen, it suits Ma Rainey’s Black Bottom to a perfect tee. It’s a work about the nature of artistic authenticity, and one imagines that Wilson wouldn’t change the story’s locked in nature for the sake of grandeur. It’s a work built around characters who bring all the grandeur and spectacle the story needs.

Ma Rainey (Viola Davis) and her blues band have made the trip from Barnesville, Georgia to Chicago, Illinois to cut a new album in the sweltering summer of 1927. The “mother of the blues” is a ruthlessly demanding and imposing boss who refuses to settle for anything less than what she believes she’s worth. While it’s great from a business standpoint (and certainly great for her), Rainey’s adherence to an increasingly passe musical form – one dismissed by some as “jugband music” – has caused tension within her backing band, and most notably with her equally hot-headed and obstinate trumpeter, Levee (Chadwick Boseman). Levee is using the trip to show off his talents to the tightwad recording studio owner (Jonny Coyne), in hopes of breaking through as the head of his own band. The rest of the band – self-appointed leader Cutler (Colman Domingo), kindly, old-timer pianist Toledo (Glynn Turner), and peacemaker bassist Slow Drag (Michael Potts) – find themselves caught in the middle of Ma and Levee’s constant power plays.

Ma Rainey’s Black Bottom is a drama that takes place predominantly in two locations: the basement of the recording studio where the band rehearses while waiting for Ma to get her act together and the actual studio. Although focused on the black experience during the 1920s (which thematically and historically isn’t too far off from modern times), Ma Rainey’s Black Bottom has a lot in common with British upstairs/downstairs styled dramas. There’s the nobility and there are the servants. There are people who wish to transcend their lot in life, while others hang onto their star status with all their might. Wilson’s words don’t start as sparks. They come as fully formed infernos that require actors to plunge the audience into their world rather than easing them into anything. It’s a play meant to feel almost claustrophobic and inescapable.

Director George C. Wolfe (Lackawanna Blues, The Immortal Life of Henrietta Lacks) and screenwriter Ruben Santiago-Hudson both have extensive and highly celebrated careers on both stage and screen, making them the perfect choices for a project that needs to delicately marry both settings to retain the power and force of the source material and any performances contained within. Ma Rainey’s Black Bottom is built around two primary characters who want to own the world around them, and woe be unto anyone who gets in either of their ways. But because both Ma Rainey and Levee are so focused on being the best at all costs, neither can see that the world they want to own is rather small and shrinking by the moment. They can own a stage or hold court in a recording studio, but the sort of all encompassing success they both desire will forever elude them. 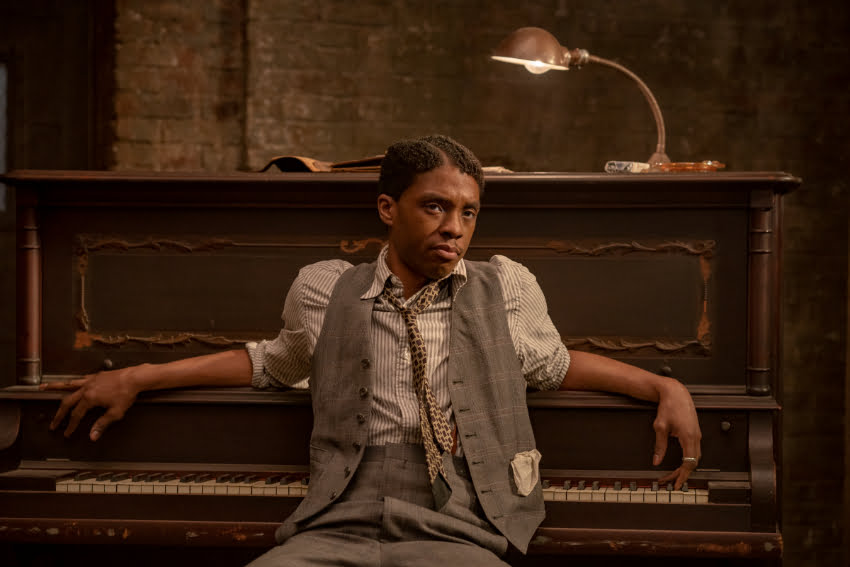 That’s not to say that the real life Ma Rainey (who would pass away roughly a decade after this theoretical situation takes place) wasn’t successful. She was at the top of her game and wasn’t afraid to let everyone know that she runs things. Ma Rainey was also one of the few openly queer musical artists of her time, making her even more of a trailblazer. Ma Rainey isn’t shy in bringing her new girlfriend, Dussie Mae (Taylour Paige), to the studio, despite the fact that Levee clearly has eyes for the younger woman. Ma Rainey firmly negotiates with her white manager (Jeremy Shamos) for any number of demands, from cooling fans and bottles of soda before recording to higher payouts and an insistence that her stuttering nephew (Dusan Brown) deliver the spoken word intro to the latest album.

With gold teeth out in front for all to see, loose fitting clothing that appears to be melting, and eye makeup that looks like it was applied with a paint scraper, Ma Rainey is a vision unto herself, and one of the finest characters in Davis’ career. Ma Rainey refuses to be condescended to, and fools need to take heed. The infectious charisma and assertiveness of Davis’ performance borders on frightening. From the moment Ma Rainey strolls into the recording studio (whenever she feels like showing up, as per custom), it’s clear who’s the star of this show and the brains behind the operation. Davis exceptionally balances the strength of Ma Rainey with her delusions. Here is a woman who still knows how to get what she wants, but she’s oblivious to the ways the changing music industry will render her irrelevant.

Davis’ commanding performance finds a perfect counterpoint in Boseman’s equally confident turn. Boseman, in what will depressingly be his final, and perhaps best performance, starts off by playing Levee as an arrogant back-up player who raises some good points that his fellow bandmates willfully choose to ignore. Levee is just as animated and unapologetic as Ma Rainey, but when it comes to negotiating, it’s clear that he has a lot to learn. While Ma Rainey grows more sympathetic over the course of the film, Levee becomes far less endearing the longer one gets to know him. It doesn’t matter that Levee, like his boss, understands his worth, but rather how he chooses to express it. Ma might rub people the wrong way, but Levee seems more impossible to work or reason with. Boseman embraces all of Levee’s worst impulses to craft a performance that can bounce between sympathetic and disdainful at a moment’s notice. Boseman seems to have been born to speak Wilson’s words and rhythms, and it’s shocking that he never had the chance to do so before Ma Rainey’s Black Bottom.

The characters and relationships at the heart of Ma Rainey’s Black Bottom can be analyzed endlessly through the lenses of history, sociology, music (thanks to Branford Marsalis’ tremendous arrangements), literature, and drama, which is a testament to the enduring nature of Wilson’s core material. It’s a film that values the viewer’s intelligence and hopes that they won’t cast immediate judgments on any of these people unless absolutely and morally necessary. It locks the audience into dirty studios and even dirtier basements with the band and everyone in their orbit, and forces them to see things through to the bitter end. It feels, quite appropriately, like being backstage at a concert being given by a band on the verge of splintering. It’s powerful, uncomfortable, bittersweet, and yet, uniquely satisfying. 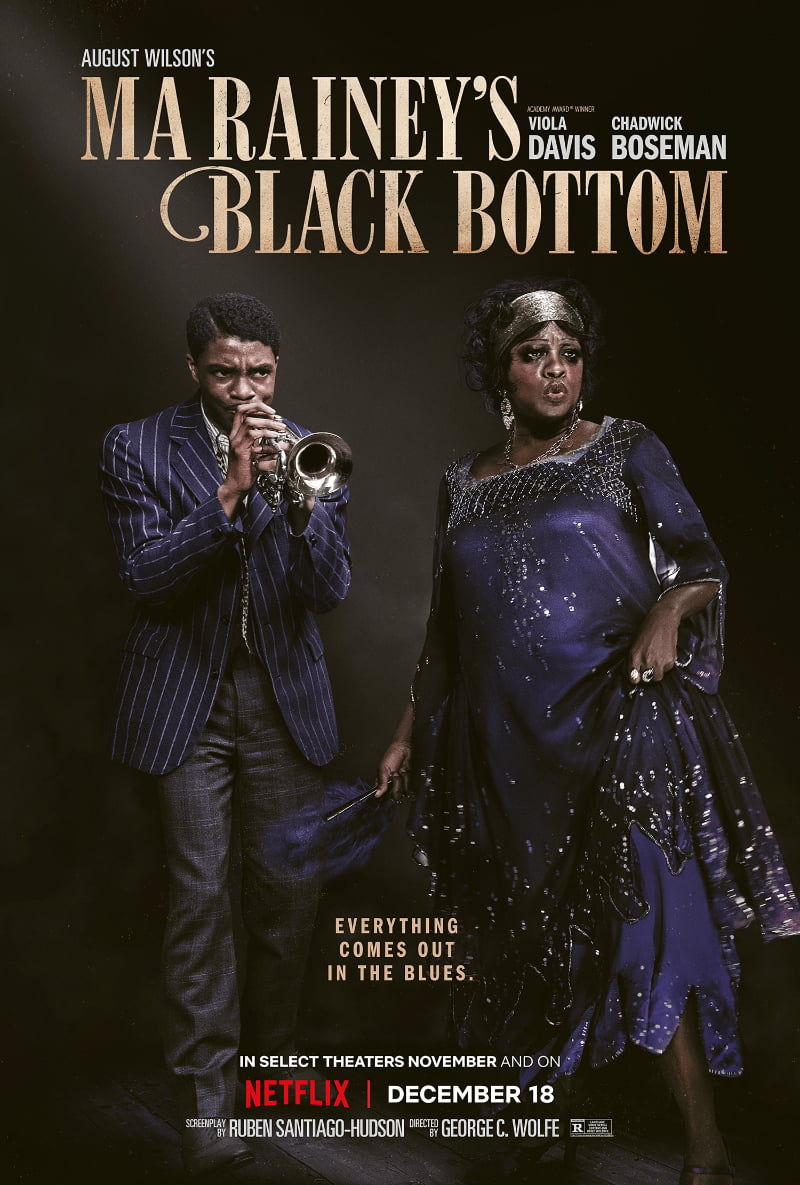