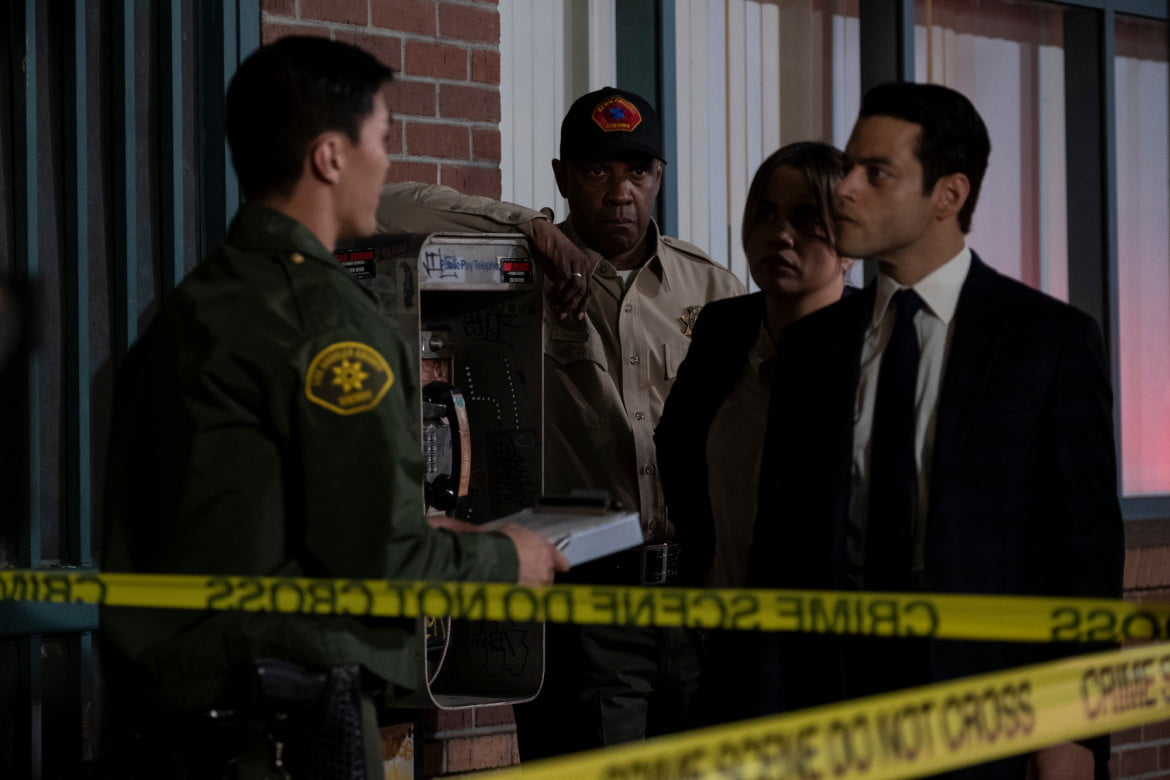 The serial killer thriller The Little Things belongs to one of my favourite, but curiously little talked about subgenres of film: the “Denzel Washington faces off against a psychopath/con artist/terrorist/conspiracy” movie. There’s a long, pronounced lineage of movies in the Oscar winning actor’s C.V. that fit that a bill: The Mighty Quinn, Ricochet, Virtuosity, Fallen, The Siege, The Bone Collector, Out of Time, Man on Fire, Inside Man, Deja Vu, The Taking of Pelham 1 2 3, The Equalizer films. Most of those listed above (with perhaps the most notable exception being the dire, paint-by-numbers bestseller adaptation of The Bone Collector) are entertaining, if unexceptional and sometimes forgettable action thrillers that play on Washington’s biggest strength as an actor: if he looks you in the eye and says he’s going to do something, he absolutely means it. (In fact, he often guarantees it.) If Washington isn’t doing the type of film that showcases his talents as one of the greatest performers of his generation, he’s probably doing one of these in the interim. The Little Things would rank on the lower end of such projects, preferring style and formula over genuine substance, but there’s something undeniably charming about its nasty, unabashed familiarity.

It’s the early 90s, and citizens of Los Angeles are living in fear of the latest serial killer to crop up in an era already well known for them. Hotshot detective Jim Baxter (Rami Malek) has been assigned to head up the high profile investigation. A few years earlier, the job might have fallen to Joe “Deke” Deacon (Washington), a disgraced LAPD homicide detective who fell all the way down to becoming a small town beat cop up north. When Deke is tasked with returning to Los Angeles to retrieve evidence linked to a case, few are happy to see him. Knowing Deke by reputation alone, Jim cautiously tries to pick the once brilliant investigator’s brain about the new case. Much to the chagrin of Jim’s superiors, Deke ends up sticking around to unofficially assist. The cops eventually zone in on a likely suspect in the murders (Jared Leto), but a lack of concrete evidence and the wiliness of their target might force Deke into the same obsessive, dubious tactics that caused him to leave the City of Angels in the first place.

The Little Things is the latest film from writer and director John Lee Hancock (The Blind Side, The Founder, The Highwaymen), and it plays no differently than any serial killer procedural from the past thirty years. Not one moment in The Little Things will come as much of a shock to anyone who has seen classics of the genre (most notably Mindhunter or Seven, which are heavy, obvious influences here) or any of the films starring Washington that I listed from the outset. It’s a story of a cop trying to atone for past screw-ups. It’s a story of a divorced, veteran cop trying to lecture a younger, religious, family-oriented man that their job will put their faith and love to the test. It’s a movie where the killer will continually vex his pursuers by staying one confident step ahead, until their own hubris gets in the way. The Little Things is all riddles, misdirection, stirring speeches, and gory crime scenes that add up to an appropriately grim and grimy offering that never carves out a unique identity of its own. Hancock’s core story is so run-of-the-mill that it will leave most movie buffs feeling like Washington’s burnt out detective. They’ve seen it all before.

There are occasional flashes of a more interesting film that might have existed at one point during Hancock’s long road to producing of The Little Things. A taut opening reminiscent of slasher movie sets an eerie tone and a potentially interesting direction involving someone who survives the killer’s rampage, but it’s only used to forward a disappointing and ludicrously stupid plot gambit. Anything involving Deke or Jim’s families is passibly limp, but nothing that enhances the overall drama beyond the obvious. Once Leto appears about an hour in and the villain starts toying with the cops, The Little Things remains entertaining in a trashy sort of way, but the narrative – built around an ethically dubious message about policing that’s bound to raise a few eyebrows – collapses into outright B-movie silliness. It’s the sort of film where the viewer will watch characters driving between locations for minutes on end, and when it’s all over one of them will gruffly exclaim “Cut the bullshit,” without a hint of irony that the audience has just sat through a lot of bullshit. 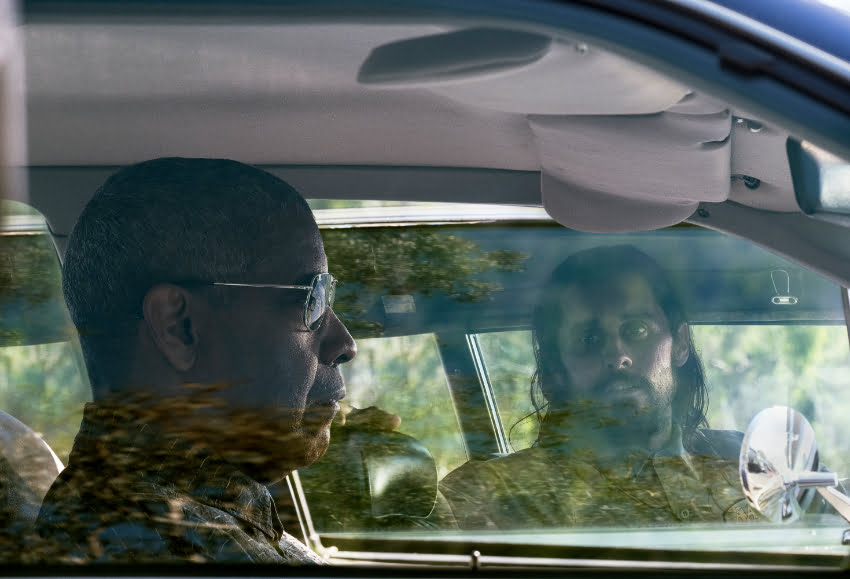 The core performances and the tremendous, eye catching work put in by cinematographer and frequent Hancock collaborator John Schwartzman are the only things elevating The Little Things above its formulaic trappings, and even then, not by very much. Schwartzman and the production team balance SoCal’s sleaziness and wholesomeness nicely, giving Hancock and his cast an appropriately sun and moon drenched sandbox and backdrop. Malek is believable in the least of the three leading roles, lending a lot of credibility to his part as a naive, but passionate detective, husband, and father. Washington – who could play this guy in his sleep – brings a degree of ambiguity to Deke that doesn’t appear to be on the page. It’s never clear whether or not Deke is hesitant to dive back into his old ways or if he’s relentlessly chasing ghosts from the past, and that comes almost entirely from Washington’s performance alone.

Then there’s Leto, who’s generating some degree of Oscar buzz for his performance as the bizarrely named Albert Sparma. While I wouldn’t go that far in praising Leto’s performance, it’s certainly another full-on, unwaveringly committed physical transformation for the actor that certainly perks things up on the creepiness scale. With almost jet-black eyes and a paunchy midsection that seems out of place on Albert’s otherwise gaunt body, Leto is a bundle of hyper-confident, but undeniably nervous energy. Leto’s performance here comes across a bit like watching Nicolas Cage trying to deliver one of his over-the-top turns while on a potentially deadly mix of uppers and downers at the same time. It’s a lot of effort put into such a bog standard serial killer flick like The Little Things, but Leto succeeds in making the viewer believe that both Washington and Malek would want to wring the character’s neck to within an inch of his life, so his mission is accomplished at the very least. In fact, Leto’s borderline campiness makes him appear like the only actor here who knows precisely the kind of project they’ve signed up for.

I can’t say that The Little Things is a great movie overall, but I can say that I was moderately entertained. It’s probably because (like many others, apparently) I find it fun to watch someone like Denzel Washington gracing films like this that sound beneath him on paper. Hancock’s latest is a lot of empty calories with some A-list sheen. If the world were a safer place for theatres to be open, it’s precisely the kind of thing that would pack viewers into a multiplex during the month of January; the only new and interesting movie amid a sea of holiday holdovers and awards contenders. It ticks most of the boxes on the mad killer genre checklist and demands nothing from the viewer in return, and if you’re a sucker for this sort of thing – like I am – The Little Things hits a very specific sweet spot.

The Little Things opens in select cinemas and is available to rent on PVOD starting Friday, January 29, 2021. If seeing a film in theatres, please take all necessary precautions. Wear a mask, practice social distancing, and stay home if feeling ill. 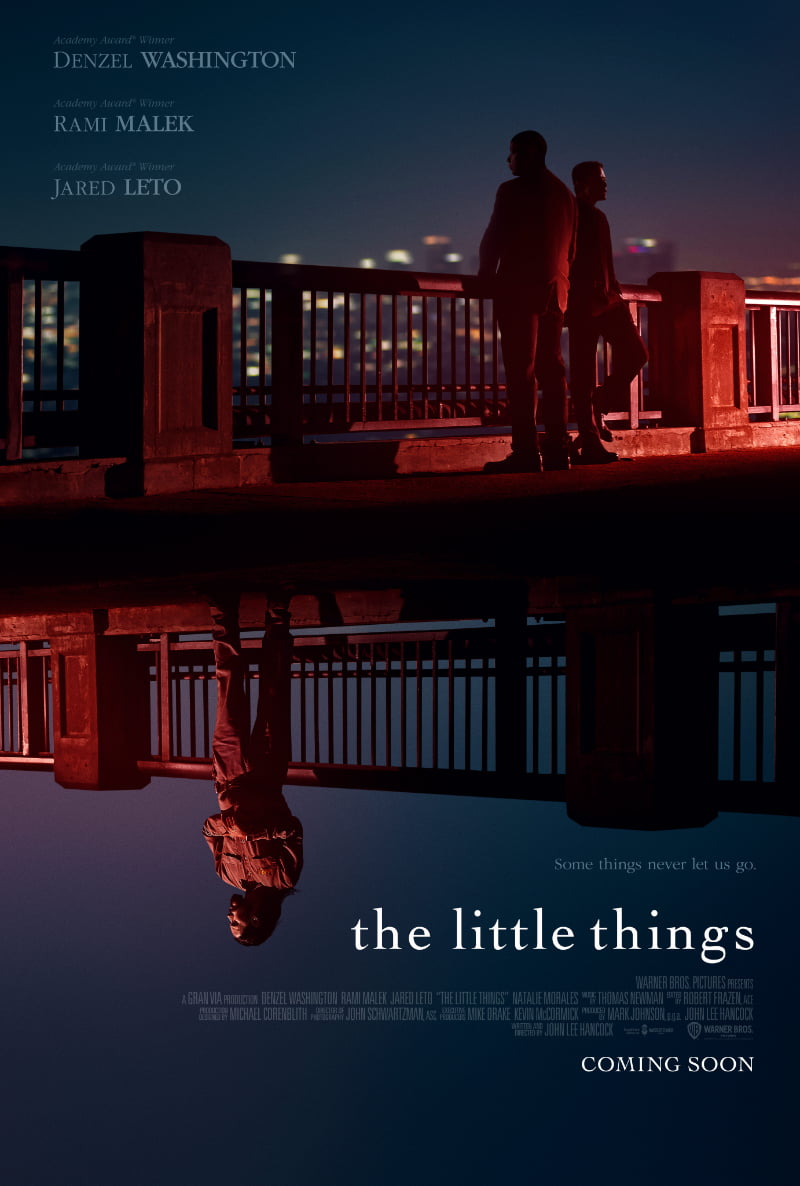