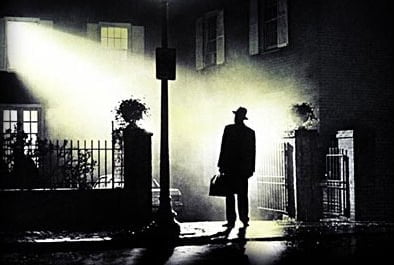 Grab some Holy water, a rusty axe, and your boomstick – The GATE’s first ever Halloween movie poll has arrived. Rounding up some of our favorite people – including actors, musicians, writers, and industry pros – we asked them to rank their five favorite Halloween and horror films. All told there were over 100 films fighting it out to make our top list, but when the votes were counted only 10 films remained.

Check out the comments from our Halloween experts below, and find out what they had to say about their favorite movies. Some of the people who helped us out include actor Mark Rendall from 30 Days of Night, drummer Rich Beddoe of Finger Eleven, director Bruce McDonald, musician Buck 65, Liana K. from Ed’s Night Party, Drew Curtis from Fark.com, and Peter Howell from the Toronto Star, just to name a few.

Yes, in the end The Exorcist won out over Stephen King‘s The Shining, and Tim Burton‘s Nightmare Before Christmas was able to overcome classic horror films Poltergeist and Halloween.

For those few of you who haven’t seen it yet, The Exorcist was based on the novel by William Peter Blatty and was directed by William Friedkin. The film is perhaps most famous for the climactic scene with Linda Blair playing Regan, a possessed young girl fighting against two priests as they attempt an exorcism.

Scroll down to read all of the comments we received on our contributor’s favorite films. As well, a few people went above and beyond the call of duty and provided extended comments on all five of their favorite films – if you want to find out more about our contributors, or any other comments, just click on a person’s name below to go to the extended Halloween film section.

Mark Rendall, Actor – ‘30 Days of Night‘
An American Werewolf In London
An American Werewolf In London is my favorite horror film because it fucked up my childhood. It gave me nightmares for over three years and all I could draw were grotesque images of monsters ripping out peoples throats. The moore scene at the beginning in which they are attacked really got to me, as well as the transformation scene where the pop music on the radio juxtaposes his horrific inner mutation. So yeah. It changed me for better or for worse.

Aaron Abrams, Co-Writer and Star – ‘Young People Fucking‘
Sleepaway Camp
This movie blew my mind when I was a kid. I think itâ€™s the only time I ever screamed from a movie. If you’ve seen it, you already know the part where I yelped. If you haven’t seen it, I canâ€™t ruin it for you, but holy fucking shit that chick had a dick.

Olivia Cheng, Actor – ‘The Rape of Nanking’
Spirited Away
Spirited Away is an anime movie that makes you feel like you’re trapped in a weird, bizarre, and totally surreal nightmare. It’s a total trip.

Brigitte Kingsley, Actor and Producer – ‘Dark Rising‘
Poltergeist
Because I watched it when I was super young and spent the next few years of my life hiding from the huge tree outside my window. I even slept on the floor between the wall and the bed during storms convinced that if the tree looked into my window – it wouldn’t see me… [Laugh] and I still get creeped out when the TV gets fuzzy.

Carly Pope, Actor – TV’s ‘Yeti: Curse of the Snow Demon’, and ‘Young People Fucking‘
The Watcher in the Woods
This was the first film that ever scared the crap out of me so it inevitably holds a very special spot on the creep meter.

Matt Austin, Filmmaker – ‘Open Book: Toronto’
Rope
Though not graphically gory or featuring a bizarre monster bent on slashing his way through to the top, Alfred Hitchcock is a master of suspense and human horrors and Rope, I believe, is his best work. As a filmmaker I’m also drawn to it as there isn’t a cut in the film until 15 minutes into it. It’s a film of long, long takes and only about 5 cuts. Also, after being constrained to black and white film, it’s Hitchcock’s first foray into colour.

Tony Wosk, Film Executive – Christal Films Distribution, Acquisitions
Severance
Severance is a recent favourite because of the way writer/director Christopher Smith deftly balances his horror with comedy to make a truly entertaining yet very scary film. I’ve watched this film with theatre audiences a number of times, and it never disappoints.

Liana K., TV Host and Producer – Ed’s Night Party
The Silence of the Lambs
Never mind my favourite Halloween movie, this is one of my favourite movies of all TIME! … okay it’s not a Halloween movie at ALL, really, but… IT’S ONE OF MY FAVOURITE MOVIES. OF. ALL. TIIMMMMMMME! In my books, it was the last truly great psychological thriller. So if you don’t like it, bite me with some fava beans and a nice Chianti!

Alan Park, Actor – CBC’s ‘Air Farce Live‘
The Thing (1982)
A tough list to whittle down to only five. Notice how old these are. That’s what’s really scary. They say comedy is hard, but good horror appears more difficult to make. The Thing is well acted, really creepy and also works as a who-done-it thriller with great action.

Christopher Bolton, Actor, Writer, Creator and Executive Producer – ‘Rent-A-Goalie‘
Thank You For Smoking
Because I don’t like scary movies at all.

John Panikkar, Co-Founder and COO – High Fidelity HDTV (Hubble’s Canvas, Ultimate Dream Day, Motivated, and Road Crews)
The Exorcist
Saw it at an impressionable age and had nightmares for a week afterwards.

Rich Beddoe, Drummer – Finger Eleven
Children Of The Corn
Although Children Of The Corn is not my number one [film], I will comment on it and it’s music. The movie is not the best but the music in it is the scariest shit ever. When I was young it freaked me out so bad for like a week. I watched it from the top of the stairs as my parents would not allow me to watch movies like that. When the kids started killing the older people in the cafe at the beginning, and the chanting music began, I was pretty much fucked. I could not be anywhere near a cornfield for a very long time, in fact I still stay away!

Buck 65, Musician
The Texas Chainsaw Massacre (1974)
For my money, The Texas Chainsaw Massacre is the scariest movie ever made. It’s terrifying. If you get the special edition DVD, watch the out-takes reel – it’s even scarier than the movie itself! The story of the making of the film makes it even scarier. But not only is it scary as hell, it’s so clever, so well made. I might go so far as to say that it’s one of the greatest films ever made – period.

Billy Bottom, Lead Vocals – Nights Like These
Halloween
There’s no explanation needed! These movies scare the shit out of me!

Katie B., Singer
Halloween
Truthfully, I’m the type of person who will be the first to say “Oooh let’s rent a scary movie!” and then hide underneath a blanket the entire time it’s on. My imagination is far too vivid. I loved watching Halloween and the sequels (except for Halloween 3… what was up with that one?).

Peter Howell, Writer – The Toronto Star
Aliens
This seriously creeped me out when I first saw it in 1986, leaving me depressed for days. It still gives me shivers to watch it. More than any other horror movie, it leaves me with a feeling of utter despair. Not sure why, but it may have something to do with the twin terrors of isolation and infestation.

Drew Curtis, Creator – Fark.com
Shaun of the Dead
I lived in England for a year, I completely sympathize with the need to go to the pub regardless of how many zombies there are between me and it.

Christopher Heard, Author, Film Critic, TV Producer and GATE Writer
Halloween (1978)
To me this John Carpenter breakout film is an unqualified classic of the genre – shot in 20 days on a budget of just under $300,000 the film manages to be genuinely scary without succumbing to genre clichés. You have a bogey man that you never really see, you have victims that are innocent and vulnerable and as in all good horror movies, everyone in the film is seen to be taking it absolutely seriously which makes it much easier for the audience to do the same.

Justin Olivetti, Writer and Film Critic – Mutant Reviewers!
Alien/Aliens
I find it hard – if not impossible – to separate my love of Alien and Aliens, even though the first is squarely suspense horror, and the sequel is action horror. The moviemakers behind this series hit so many key points of horror that made this a near-universal classic: the fear of being infested inside your own body, the fear of the unknown, a creature who genuinely looks “alien” out of a slithering dark nightmare, the fear of entrapment and abandonment. Although Alien sets up a crew who is obviously outmatched from the get-go by the lurking critter, Aliens does something far worse by giving us a hopeful safety net in the form of rough-and-tough marines, then yanking that away just when we got secure in the story.

W. Andrew Powell, Writer and GATEkeeper – The GATE
Donnie Darko
Few films sum up Halloween as well as Donnie Darko does for me. Between the soundtrack, which kicks off with Echo and the Bunnymen’s “The Killing Moon” and also includes Michael Andrews and singer Gary Jules’ cover of “Mad World”, and the scenes with Frank The Rabbit, this is a hell of a creepy movie. Jake Gyllenhaal is also spectacular as Donnie, and I still think the original website is one of the most intriguing/disturbing movie websites ever made.