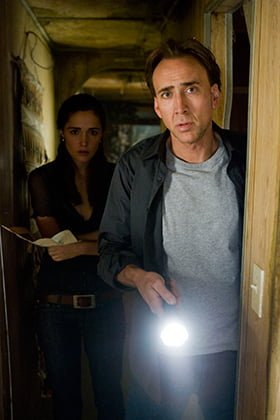 Available this week on DVD, Nicolas Cage tries to unravel the dark truth behind a collection of mysterious numbers in Knowing, in The Unborn a young woman is tormented by an evil spirit set upon her family during the days Nazi Germany, and Push has an artificially enhanced young duo trying to bring down the dark agency that created them.

Knowing
Director Alex Proyas is no stranger to dark, foreboding films. After the critically-acclaimed movie Dark City, not to mention Garage Days and I, Robot, he has delivered films with incredible vision, and atmosphere.

In Proyas’ latest dark escapade, Nicolas Cage plays professor John Koestler, a gifted but lost man, raising his daughter on his own. When he discovers a strange sheet of numbers, stored in a time capsule when he was a boy, he slowly comes to realize that the numbers are in fact predictions for every major disaster over the last 50 years. What’s worse, those horrible predictions lead right up to a final catastrophe which could bring humanity to the brink.

While Proyas instils a definite air of disaster from beginning to end, it is a little hard not to giggle at times as he borrows liberally from decades of scary movies. It is also unfortunate that these scenes almost always feel borrowed, and utterly cheesy, as when we see a shot like “Troubled Girl Standing Alone”.

Watching the film also left me feeling like the entire key cast, especially Cage, were not given the kind of direction they needed. Throughout most of the film Cage gives a stilted, sometimes even wooden performance, made even worse next to Rose Byrne, who plays Diana Wayland, a character who screeches her way through the end of the film.

Knowing does, however, have an incredible trick up its sleeve and that is the frequently unnerving, but magnificent disasters. If you do end up seeing the film, I don’t want to ruin any of those for you, but while they are gruesome in their realism, they are also genius works of filmmaking.

So, while I admire Proyas and his work here, including a rather intelligent script, the film left a bitter taste in my mouth. Even if you can ignore the acting, the story is total cheese, and ends so strangely that I don’t think many people will enjoy it. If you did enjoy Dark City, however, you may want to check this film out for the brief moments of splendour.

The Unborn
Writer and director David Goyer, who wrote Batman Begins and directed The Invisible, debuts his supernatural thriller about a young woman (Odette Yustman) who is being tormented by a dark spirit. With the help of the spiritualist Sendak (Gary Oldman), the two discover a family curse that dates back to Nazi Germany, and an unborn soul with dark intentions.

Goyer gets my respect for penning The Dark Knight, and Proyas’ Dark City, but it’s hard to ignore that he also wrote the screenplays for mediocre movies like Jumper, and Blade: Trinity.

As Nick Pinkerton of the Village Voice put it, “The Unborn is one of those movies evidently conceived by digging a Dungeons & Dragons Fiend Folio out of storage to find, resurrect, and rebrand some long-forgotten bugaboo.”

Rafer Guzman of Newsday on the other hand, has another take.

“If the use of Nazi atrocities as a MacGuffin for cheap thrills offends you,” Guzman wrote, “the Unborn isn’t your movie. If, however, you appreciate the sight of a half-naked beauty being terrorized by potato bugs, look no further.”

Push
We have been knee-deep in superhero stories over the last few years, thanks largely to the success of film franchises like Spider-Man, Batman and the X-Men. So it should hardly be surprising that a few derivative works are popping up, which bear a striking resemblance to some better-known heroes.

Chris Evans stars in this action-thriller as Nick Gant, an artificially enhanced young man who can move objects with the power of his mind. He is part of a special, albeit shady, government agency known as The Division, which has turned normal people into a group of elite special forces.

Hiding out from his creators, Nick teams up with the young clairvoyant Cassie, played by Dakota Fanning, as they look for his missing friend Kira, played by Camilla Belle. With Kira’s help, the trio might be able to put a stop to The Division’s evil work, but they’ll have to stay out of the clutches of Agent Henry Carver, played by Djimon Hounsou, if they hope to succeed.

While I was mildly intrigued by the film’s premise, the Push turned me off with the way it borrows from some of the genre’s best films.

As Liam Lacey of the Globe and Mail wrote, “Suggestive of X-Men, The Matrix and the television show Heroes, Push is one of those time-mangling thrillers that manages to seem both complicated and superficial.”

While Michael Rechtshaffen of the Hollywood Reporter gets more to the point in his review. “Director Paul McGuigan and screenwriter David Boula are content to rely on the usual suspects, taking their visual and dramatic cues from other, more clever and involving sci-fi capers.”