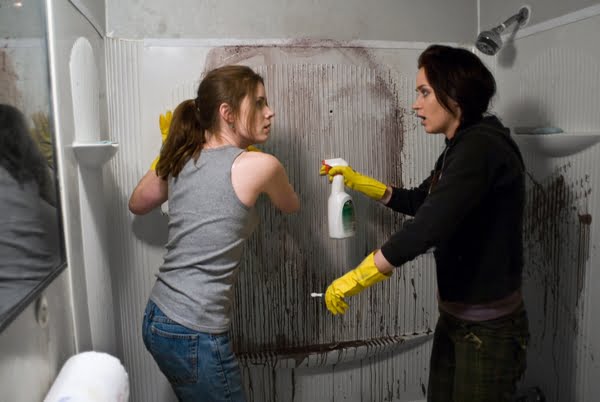 Coming out this week on DVD, Amy Adams and Emily Blunt find purpose scouring crime scenes in Sunshine Cleaning; Julia Roberts and Clive Owen take on corporate espionage in Duplicity; Adventureland jumps back to one sweet, funny summer in 1987; and David Duchovny stars as womanizer Hank Moody in the second season of Californication.

Sunshine Cleaning
The Sundance Film Festival has a reputation for showcasing some of the most clever, unique films in North America, particularly when it comes to a certain dramatic, independent style. A few great examples of that spirit crop up in previous festival hits The Squid and the Whale, the documentary Super Size Me, and American Splendor.

In this dramedy Adams plays Rose, a single mother without any prospects, working as a cleaner for middle-class snobs. After her sister, Norah (Blunt), loses her job, Rose finds a new purpose in life when the cop she’s sleeping with, who happens to be married, suggests she try her hand at crime-scene cleaning. While the grim task tests the sisters’ patience, and their resolve, they quickly find that the pay is right, and there’s a certain satisfaction to knowing that they’re helping people.

Despite a premise that feels forced, and an approach that could have used more finesse, Sunshine Cleaning is a wonderful film that wins you, thanks to the underlying story, and the two stars. Blunt and Adams are totally charming as these conflicted sisters, who sometimes have a hard time getting along. They also bring an incredible sense of innocence to the roles, which makes their career choices all the more intriguing.

With Alan Arkin as their father, the wonderful Clifton Collins Jr. as Winston, and young Jason Spevack as Oscar, Sunshine Cleaning also uniquely positions the men in the story almost on a separate level since the story clearly revolves around these sisters, while the men seem to maintain an important but distant role on the peripheral.

The film is inescapably innocent, in a way that is almost heart-rending, and while the ending is just short of revelatory, I am still highly recommending it.

Two extras are included on the DVD package; a chat with two real-life crime scene cleaners, and a commentary track with producer Glenn Williamson and writer Megan Holley. While the first feature is only somewhat interesting, the commentary track is above average, with Holley providing a few interesting asides about how she developed the story.

Duplicity
Julia Roberts and Clive Owen are back together in this dramatic thriller about two spies working within rival companies, competing to find a formula that will make one of the corporations incredibly rich. But what happens to the duo if they find themselves falling in love between the dirty tactics and tricks?

From writer and director Tony Gilroy, who brought Michael Clayton to theatres, this corporate-staged drama has all the trappings of an action-packed adventure, with the right cast on board to make it interesting. Thanks to Roberts and Owen, who have amazing chemistry, the film also has a delicious mix of sex appeal and thrills, in addition to a few laughs provided at least somewhat by co-stars Tom Wilkinson and Paul Giamatti as the rival firm bosses.

Following their last screen foray in the sexual drama Closer, Duplicity is a wonderful follow-up for Roberts and Owen. At the same time, Gilroy has crafted an above-average film that doesn’t quite come to the heights of his previous gem, Michael Clayton. It’s still paced well though, and plays up the con game at every turn, making you wonder exactly what is going on, and who is conning who, anyway?

The only shortcoming is that at two hours long, the film could have been much tighter, without quite so much fluff along the way.

Adventureland
Pardon my enthusiasm, but even in my thirties I have a soft spot for teen comedies. The truly hilarious ones are pretty uncommon, mind you, but look no further than director Greg Mottola’s Superbad for a great example of a teen comedy with laughs, and heart.

When no one will hire him though, James ends up working at an amusement park, populated by a range of weirdoes and losers. On the bright side, James might just have a shot at the sweet Em, played by Kristen Stewart, as he works for next to nothing, and tries to keep the hecklers at bay.

Co-starring Ryan Reynolds, Kristen Wiig, Bill Hader, and Martin Starr, Adventureland is a lot of fun, and for good or bad, it’s also almost exactly what you would expect.

Spread across a sparse twelve episodes each season, Duchovny plays writer and obsessive womanizer Hank Moody. Aside from the drinking, the drugs, and the trouble with women, the only other issue is that Hank suffers from perpetual writer’s block, and his one massive best-selling novel is quickly fading into history.

Following season one, where we learned about Hank’s history with the love of his life, Karen (Natascha McElhone), the second season has our hero almost immediately screwing things up again, if only because of one mistake at a party. That mistake turns out to be, perhaps, a fortunate one though as Hank ends up in prison with record producer Lew Ashby, played by the marvelous Callum Keith Rennie, who decides that Hank has to write his long-awaited biography. From there, things devolve even further as Hank tries to stay afloat in Lew’s complicated, drug-addled universe, trying to make himself heard as a rare voice of reason.

Although the series is crass at times, and maybe more than a little twisted, Californication is simply one of the best shows on television. Duchovny is the epitome of Mr. Charming, weaselling his way into situations that constantly get him into trouble. At the same time, the series is sweet and funny, thanks to his relationship with Karen, and his daughter Becca (Madeleine Martin), not to mention the cast of unique friends, played by Evan Handler, Pamela Adlon, and Madeline Zima.

The second season includes one featurette on Marcie’s Waxing Salon, commentary tracks by Adlon, plus interviews with the cast.