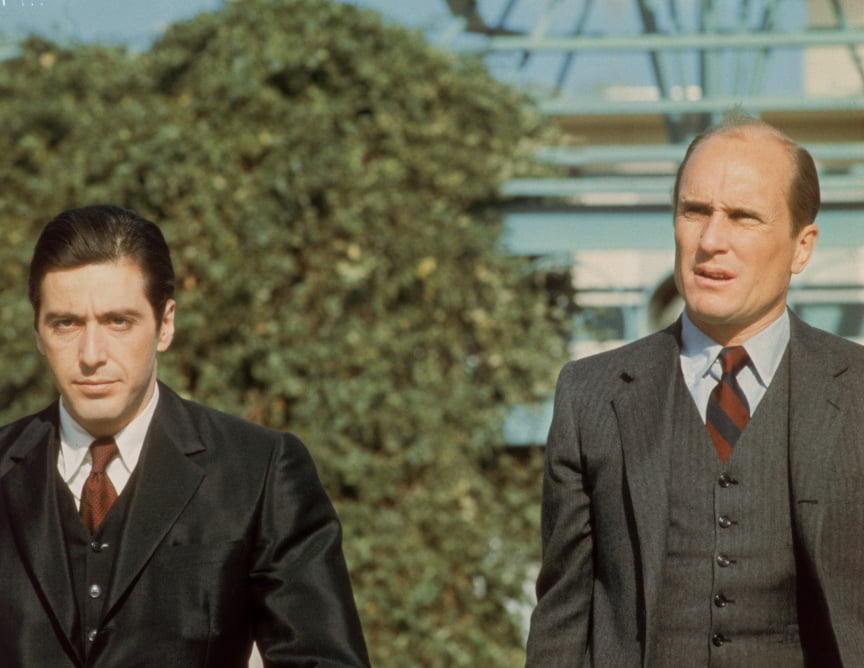 The Godfather is celebrating its 50th anniversary this year, and it’s hard to overstate the indelible mark the film left on cinema and TV. The film inspired decades worth of storytelling, and at the heart of the film’s success was director Francis Ford Coppola and its cast.

I sat down with Academy Award-winner Robert Duvall to talk about his role as Tom Hagen in the film, what his experience was like with Coppola and star Marlon Brando, and the incredible legacy of the film. Read the full conversation below.

For more on The Godfather, watch our interview with Johnny Martino.

What did The Godfather mean for you in the years after making it, and the massive appeal of the film and your character?

Robert Duvall: “Well, there’s always repercussions in a legitimate way; a good way. Everybody began to work after that. I had a career before somewhat, but after that, a little bit latee–I’m more of a late bloomer–so eight or ten years after The Godfather is going to be good for me to do my own projects, and good [for my] career.”

I read that Francis for Coppola actually held formal dinners where the actors had to attend and be in character. Do you recall that at all?

“And Coppola choreographed that because, we all as young actors, we all had a lot of respect for Brando. A lot.”

“I like to tell the story that Dustin Hoffman and Gene Hackman and I used to meet once a week at Cromwell’s Drugstore in New York City. And if we mentioned Brando’s name once, we mentioned it 25 times because we all had respect for him, and then Gene Hackman said he met Brando by mistake one time and he was so moved, he almost cried. A lot of respect for Brando. A lot.”

Did the fact that three of you had Oscar nominations from the film give you a sense early on to the respect the film had earned?

Duvall: “All I know is about a third of the way through Godfather, and before I knew it, we had something special. And I only felt that twice, but very special and turned out to be true, you know? And I gained a lot of respect for Coppola because he had to work. We thought maybe he was going to be fired because he was working under the pressure of the studio, who maybe saw the outcome of the film in a different way than he did.”

“But he did it the way he wanted to. And he adhered to those concepts of his, and the film turned out to be what he wanted. He was the boss.”

What was Coppola like to work with as a director? Because you worked with him three times, and not many of actors can say that.

“And it was great working with him. You know, just iconic. He was great. We kept the relationship somewhat for years to come. In a couple of films I directed he helped me with the editing; he was very open to that and very good. A good guy to work with; wanted to see what you would do… I call it from ‘ink to behaviour.’ He wanted to see what you brought bahaviour-wise to the table.”

Did you recognize the impact the film could have when you were making it?

“Maybe so. Maybe. It’s hard to pin that down. It [was] great to work with him and you know, Brando and the cast. [Al] Pacino, a wonderful, wonderful young actor. Jesus. [Robert] DeNiro and all the guys. It was special.”

There are people today who are going to see the film probably for the first time with this 50th anniversary release. How would you describe Brando?

“Brando was like the Godfather to young actors. Yeah. I talked to a an English actor who was very, very well respected, and when he came to New York, he watched A Streetcar Named Desire on Broadway and he got embarrassed because he thought a stagehand had walked onto the stage by mistake. He was so natural, but it was Brando.”

“And he said he saw it seven nights in a row, he saw the play, because of Brando. So he was revolutionary in a way, Brando. We looked to him like the Godfather. He influenced young actors, for good and bad. But he was so unique. So unique.”

Would you say that he taught you anything while you were working with him?

Thank you very much. I’m looking forward to seeing your film Hustle with Adam Sandler.

“And also with… Christian Bale [for The Pale Blue Eye]. Wonderful young actor. And in fact, I think Coppola approached him to play the lead in his new big movie…”

Revisions: Please note that we regret an error where Mr. Coppola’s name was incorrectly spelled on one line.