Black Panther: Wakanda Forever takes place one year after the sudden and unexpected death of King T’Challa (a role made famous by the late Chadwick Boseman), ruler and protector of the titular nation. Wakanda has found itself increasingly criticized and ridiculed on the global stage. Newly reappointed leader Queen Ramonda (Angela Bassett) refuses to share her country’s vibranium supply with others, fearing they’ll all use it to create weapons of mass destruction. Wakanda is being increasingly attacked by outside armies that see the secretive nation as easy pickings without their greatest protector. But their biggest threat yet will be from beings in a similarly tough spot: a hidden underwater colony that also has access to vibranium. Angered by the fact that T’Challa told the whole world about the power of the precious metal, these people and their seemingly invincible leader (Tenoch Huerta) demand that the Wakandans join their fight against the surface level colonizers or face their own eradication.

It would be obvious to anyone with even a passing familiarity with the MCU that Black Panther: Wakanda Forever would need to address the void filled by Chadwick Boseman’s passing, both as obvious tribute and part of the new story, and thankfully returning director and co-writer Ryan Coogler handles such a delicate and unexpected task with tact, power, and heart. Black Panther: Wakanda Forever sees the passing of a loved one not only as a time for grieving, but also chances for hope, renewal, self-discovery, and even some amount of celebration.

These feelings are best depicted by the dual journeys taken by Bassett’s powerful, but fraying queen and the scarred and shaken Shuri, played by Letitia Wright. Shuri – who was a fan favourite character in the first film thanks to her cutting wit and scientific prowess – has been deeply wounded by the fact that she wasn’t able to stop her brother T’Challa’s illness from progressing. The memory of her brother is all that’s keeping her from “burning the world down,” in her own words. Whereas Queen Ramonda is doing her best to redouble the diplomatic work that her late son and husband both started before they passed unexpectedly. When Coogler and co-writer Joe Robert Cole stick to these intricately written and fully realized personal narratives, Black Panther: Wakanda Forever soars with a good amount of poignancy. It’s every other aspect of the narrative that stumbles.

Black Panther: Wakanda Forever is an epically long film that feels curiously like it has been reverse engineered, built around an ending that everyone had in mind without considering what would come before it. The film struggles to build toward it’s intended conclusions and reveals while simultaneously becoming just another cog in the increasingly overstuffed Marvel Cinematic Universe. The first half of Black Panther: Wakanda Forever gets off to a strong start by paying homage to Boseman’s legacy before becoming distressingly flat and cliched for a lengthy stretch. The new additions to the story feel forced and the general plot comes across less like a Black Panther adventure and more like it has been ripped off from both Avatar and Aquaman at the same time. This lack of narrative originality and stagnancy has been part and parcel of Marvel’s current “fourth phase,” and sadly Black Panther: Wakanda Forever – the sequel to one of the studio’s most successful and beloved films – is no exception. 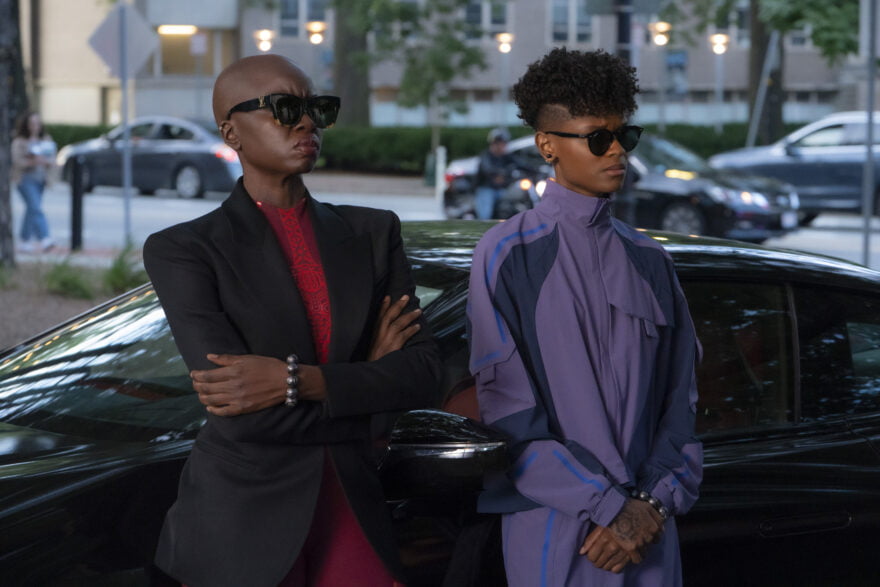 The idea of pitting Wakanda against another similarly minded secret civilization could’ve been a simple, but effective one. The downside is that these beings aren’t that deep or interesting, with all but their leader coming across as uninteresting, interchangeable, indistinguishable heavies that will get into knock-down-drag-out fights with the heroes. Investment in the overall plot of Black Panther: Wakanda Forever is at a minimum until just around the halfway point when the personal motivations of the film’s antagonist are finally revealed. Before that long awaited moment, most of Coogler’s film is a pretty looking product that feels like it’s on autopilot.

Similarly, this thread is also bogged down considerably by two major running time devouring subplots that only serve to further the overall agenda of the MCU rather than enhancing anything in the film itself. Shuri and hard-nosed warrior Okoye (Danai Gurira) are tasked with locating and protecting a scientific whiz-kid (Dominique Thorne) who just so happened to build the world’s first vibranium detector (among other nifty gadgets), while the Queen stays in constant contact with her “favourite colonizer” and helpful U.S. government stooge, Everett Ross (Martin Freeman). Both threads drag down the momentum of a story that would’ve been fine on its own, but they impede the progress of a story too thin to take on the added weight. Neither character is very interesting, but one of them is about to be spun off into their own major story line, and the other is simply there to connect to something else that came before it. It’s all very forced and trite when compared to the emotional gravity of everything else in the story. Worst of all, it reeks of tacky corporate synergy that’s losing a lot of energy from all the additional padding.

But at a certain point, Black Panther: Wakanda Forever saves itself from the many obvious weaknesses and starts to click. Once again, Coogler has built the film around Wakanda having to fend off attack from “villains” that have some justification for their actions. When the noise dies down and the spotlight is placed of Shuri’s conflicted emotions, Wright is more than up to the task of carrying the entire movie and narrative on her back. Bassett is just as commanding, making a major impact with a positively earth shaking performance that’s up there with the performer’s all time best. Huerta is a compelling presence as the antagonist, and Gurira brings a nice amount of strength and humour to her supporting role, especially when placed opposite Wright or Thorne. And Winston Duke’s hulking alpha male M’Baku remains an absolute delight to watch.

The production value is also quite stunning, but that’s almost to be expected from a hand as strong as Coogler. After a wonky looking chase scene in the early going that feels a lot more like a Transformers movie than a Marvel effort, the quality of the action sequences remain on par with the original. The globe trotting aspect of the adventures – much of which happen at sea – offers some rich detail and gorgeous underwater cinematography that will leave viewers in awe. It would be easy to note the obvious parallels here to the work of James Cameron, but no one else has tried to emulate that filmmaker as confidently as Coogler has here.

While Black Panther: Wakanda Forever is disappointing when held up against the film that came before it, Coogler and company have still done a great job of trying to make a franchise sequel without the star that made the first movie so special. It’s not as refreshing and original as Coogler’s previous film, but once the pieces start falling into place, at least it feels like a Black Panther movie and not like a recycled product being put out under a fancy new name. It has heart where it counts the most, and those emotional bursts still hit their marks whenever they have to arrive. It’s a film that has been given a list of almost impossible tasks, and while not all of it works, it still mostly satisfies. 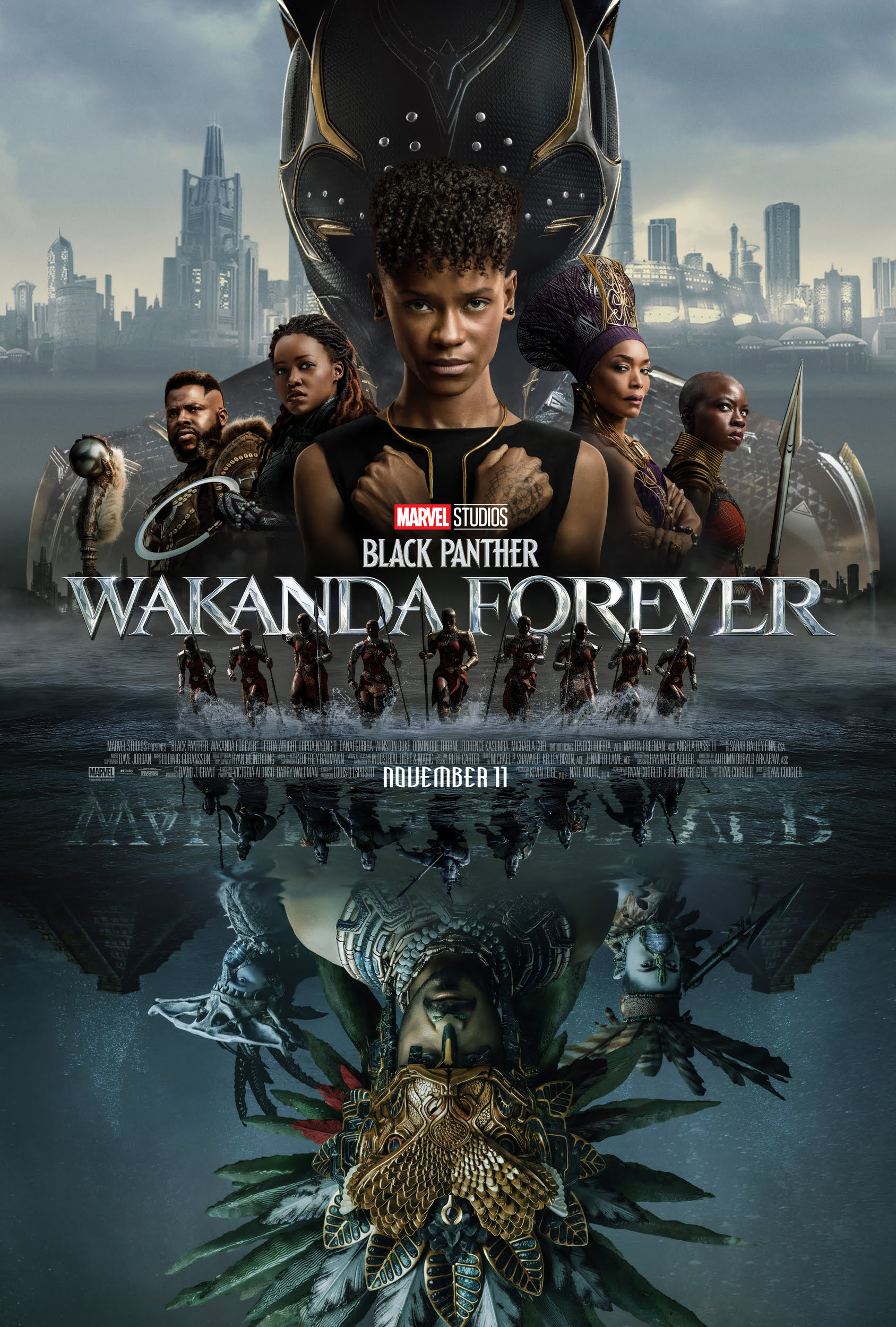