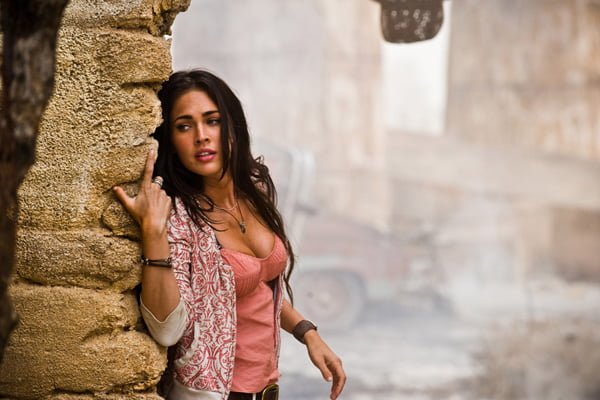 Megan Fox on the set of Transformers Revenge of the Fallen

New this week on home video, Michael Bay‘s Transformers: Revenge of the Fallen blasts its way onto DVD and Blu-ray; high school turns a little noir in the comedy Assassination Of A High School President; Nazi zombies take over the hills in the Indie horror film Dead Snow; plus a look at The Transformers – complete cartoon series, It’s Garry Shandling’s Show, and Waterworld on Blu-ray.

For anyone else, it’s safe to say that you probably know as much as you need to figure out that the plot definitely takes the back seat to the constant explosions, special effects, and dare I say, Megan Fox’s curves. Not that any of those things are exactly bad, especially when Bay is in charge, but considering the first film was actually a lot of fun it’s hard to understand why the sequel turned out so pointless.

Shia LaBeouf stars once more as Sam Witwicky, who is torn apart from his girlfriend, Mikaela (Fox), and his giant robot friend, Bumblebee, when he heads off to college. Chaos breaks out in Sam’s supposedly normal life when a robot hunts him down looking for the shard of the Allspark which survived the events of the first film, and have started making Sam hallucinate. This kicks off more than two hours of robo-rampaging across the globe as the Autobots try to protect Sam and Mikaela, while the Decepticons hunt for a secret that remains hidden on Earth, but locked away in the heart of the Allspark.

As a fan of the original series, I think I’m a bit biased, but my biggest problem is that our metallic heroes, including Optimus Prime, are meagre stars at best. Our fleshy stars, LaBeouf and Fox, get the lion share of the best scenes, and lame though they are, they still manage to outshine Prime and his soldiers.

Given the film’s complete lack of imagination, and loaded under some of the worst dialogue of the year, Revenge of the Fallen is only barely watchable when the special effects are on full blast. That’s about the only thing that Bay and his crew got absolutely perfectly, but that’s no excuse, and frankly none of that is a good enough reason to sit through the film.

Normally, I’m quite happy to recommend movies on Blu-ray for big screen owners, but frankly, this one isn’t worth it. It’s over two hours of your life that you will never see again, and really only confirms my fears; Hollywood can run any good idea into the ground.

Set at an average Catholic high school, this film noir comedy dabbles with themes that we’ve seen in a lot of other teen movies, but the result is unique. While comparisons have been drawn to Brick, a modern film noir set in the suburbs, Assassination is definitely a comedy reminiscent more of Heathers than anything else.

Reece Thompson plays Bobby Funke, an average and somewhat-unappreciated wannabe journalist looking for a scoop that will get him into a summer program with a respectable journalism school. Interviewing the school president for a fluff story, Bobby stumbles into a much bigger tale of crime when he suspects that the revered president may actually have stolen all of the recent SAT tests. After a few days, Bobby wonders is there is an even bigger story waiting to be uncovered.

Co-starring Bruce Willis as the over-the-top Principal Kirkpatrick and Mischa Barton as the beautiful Francesca, the film is consistantly funny without disturbing any of the well-laid noir elements. Replacing the gumshoe’s standard cigarettes is high-school-friendly chewing gum. Barton’s brainy high school temptress is the equivalent of the damsel in distress, and of course, Willis plays the crazed boss.

Assassination Of A High School President could have been a notch more clever at times, and I’m not wild about all of the performances, particularly Barton, who often is barely passable in this role, but I still liked the film a lot. Thompson is a great lead for this zero-to-hero character, and there is a great cast of supporting characters as well, including Luke Grimes as Marlon and Melonie Diaz as Clara.

The film can certainly be a bit hammy, punctuated as it is by Bruce Willis’ epic caricature of a war veteran in charge of a school, but aside from its charming delivery I also have to give huge credit to the dialogue, which is often thick as porridge, and cleverly entertaining.

Dead Snow
Rarely do I get the chance to write a sentence as interesting as this, but my friends, the hills are alive, with the sound of screaming Nazi zombies.

In this sub-titled indie horror film, a group of friends head off to the mountains for a weekend of skiing and drinking, but little do they realize that a horde of killer Nazi zombies are lurking in the shadows. It doesn’t take long before the body count rises, and the friends have to find any way they can to survive.

With the occasional nod to other horror greats, including an Evil Dead reference near the end, the film is fun, particularly if you enjoy a dark and bloody horror comedy. The film is definitely a bit low budget, but the filmmakers still managed to make the film look very, very good, and more than gory enough for the average zombie fan.

Celebrating the series’ 25th anniversary this year, the new “Matrix Of Leadership Edition” collection includes 16 discs, two magnets, a 60-page book, and numerous features. If I had to point out any of those features though, the interviews with the filmmakers and voice talent is certainly what I would call a must-watch segment for any fans of the original series.

While the cartoons are showing their age all these years later, this is a great collection for anyone who won’t be happy with just one season.

It’s Garry Shandling’s Show: The Complete Series
Garry Shandling stars as himself in this very odd, but very funny sitcom that breaks the fourth wall and frequently invited the audience to participate in the weekly adventures of Garry and his friends.

Featuring an opening monologue, a kitschy theme song, and characters who performed like they knew they were in a television show, the series was a hit with critics, and ran for five years with 72 half-hour episodes.

While the show is funny, it helps to be a fan of Shandling’s unique sense of humour, but the series is genuinely easy to enjoy, even if it is an oddity among television sitcoms.

Waterworld [Blu-ray]
And just because we all need a good laugh sometimes, Kevin Costner’s massive disaster (critically, financially, and in terms of the storyline as well) debuts on Blu-ray today. Telling the tale of a future where the Earth has been flooded by water, after the ice caps melted, the film is a post-apocalyptic adventure where Coster plays a mutant who has adapted to the new reality… by sprouting gills. The visuals are enticing, but the story is really pretty dreadful, especially since it’s also looking a little dated now.