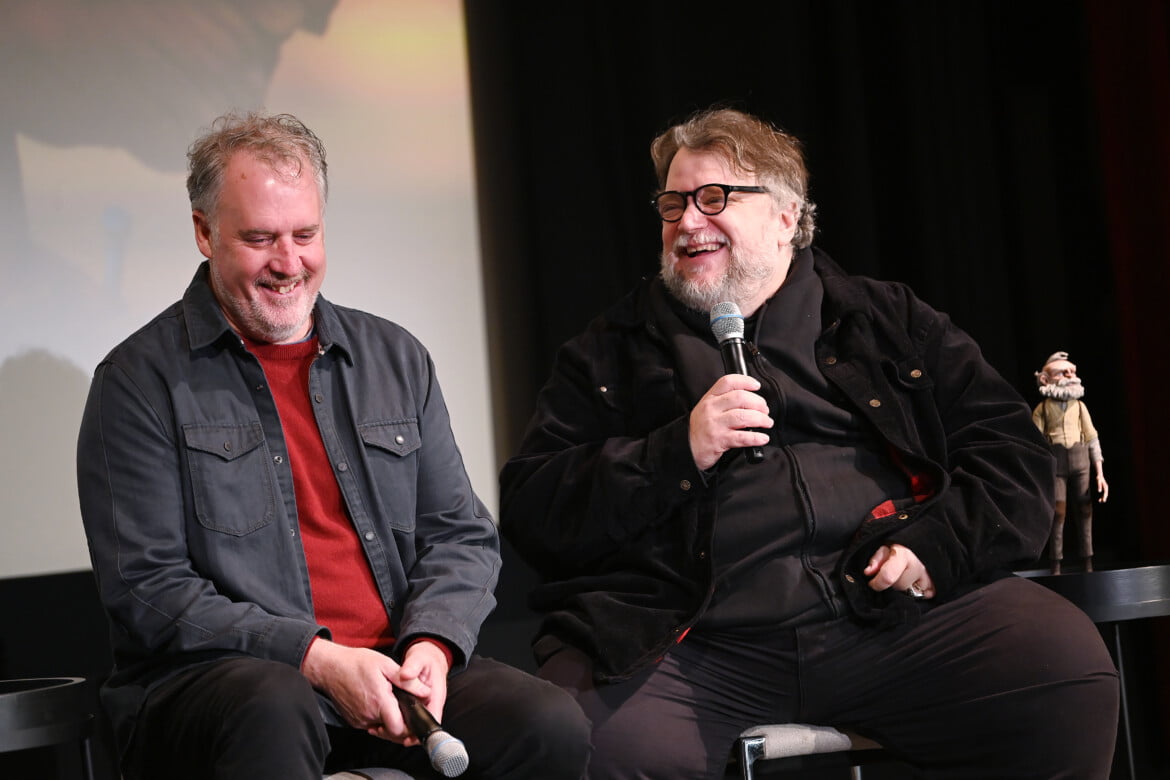 Guillermo del Toro’s Pinocchio is a magical, moving story filled with heart, thoughtfulness, and warmth that brings new meaning to the classic fable. The film is about fathers and sons, love and loss, and it’s impeccably told by co-directors Guillermo del Toro and Mark Gustafson.

Like a lot of stop-motion, Pinocchio took a lot of work to create it, and development started back in 2008. From the very beginning, it was an important project for del Toro.

“He’s very passionate about this,” Gustafson said. “This idea of Pinocchio is something that’s been important to him for a long time, and he demanded 100 percent from us 100 percent of the time.”

“And because the material was so good, we were all very much on board with that, and we wanted to do the absolute best we could.”

Del Toro was just as inspired by Gustafson. “I admired him not only as an animator… I admire his directorial decisions and discussions we had,” del Toro said. “I think we are in sync to an uncanny degree.” And beyond that, Gustafson also taught him something new.

“I learned to listen more than ever in my entire 58 years of life. I said yes to Mark more than anybody including my two wives, and we would always try everything either of us proposed. Neither of us said no to anything.”

One of the biggest themes for del Toro in the story was love and acceptance, and how importantly they go together.

“I think that the idea, if someone says they love you, but they want you to change, run, because love is acceptance, a hundred percent, and I think a defect is a quality that hasn’t been looked at properly.”

“I really think the lesson was for Geppetto, so he becomes a real dad which is a much better fable,” del Toro said, rather than the story that Pinocchio becomes a “real boy.”

However one actor almost didn’t make the cut.

“I found him contemporary in my head,” the director said. “And then you hear him.”

“It’s not that I didn’t want him, I wanted somebody else really stubbornly, and I couldn’t see the cricket any other way. I was sure that this was gonna be a one step into giving the role to the other actor. [But] I thought we’ll, try it because Ewan is an extraordinary actor, and then he came in and we heard him, and we were blown away.

The directors even admitted that they had considered killing off Sebastian early on in the film, but when they heard McGregor’s performance, they actually ended up expanding his role.

Pinocchio is a beautiful film, and it will remind audiences how beautiful stop motion film can be, but del Toro suggested that while children can watch it, it’s not made for kids. Del Toro also spoke out against the idea that animated films are for kids.

“If you think about the history of animation, it was not born for kids. It became for kids when it made oodles of money with kids, and it was a commercial decision mostly in North America.”

“As it happens, some of the great works of art, in my opinion, come from animation. It’s a medium, not a genre, and it’s a thing that needs and demands the respect to participate in the conversation in its rightful place.”

“You know, life, death, paternity, disobedience, freedom, and when I pitched it in every studio, they would say ‘is it for kids?’ And I said ‘no, but kids can watch it if their parents talk to them.’ If you want a babysitter movie, that’s a different type of movie.”

Gustafson and del Toro’s Pinocchio aim their lens at historical fascism, how it affected Italy, and it holds up a mirror to things that are happening today in the world.

“We live in a moment in which childhood knows there is a civil war happening in the world. They know the doomsday clock is closer than ever. They know that there is oppression, there are riots of fascism, suppression of this and that. I mean, the kids live in an incredibly scary world. Why not have the conversations, you know?”

The film is nuanced and textured, both visually and figuratively, and it’s warm, funny, and feels so heartfelt.

“I think Pinocchio is such a pure soul that everybody that he encounters in the film winds up finding out something wonderful about themselves just reflected in him. He’s literally naked pretty much the whole film. Although the same way we all come into the world.”

“Yeah, he gets boots at one point,” Gustafson said, “but he’s unfinished and he’s naked. You know get to fill in the rest of his character. So you find something good in yourself just by spending time with him.”